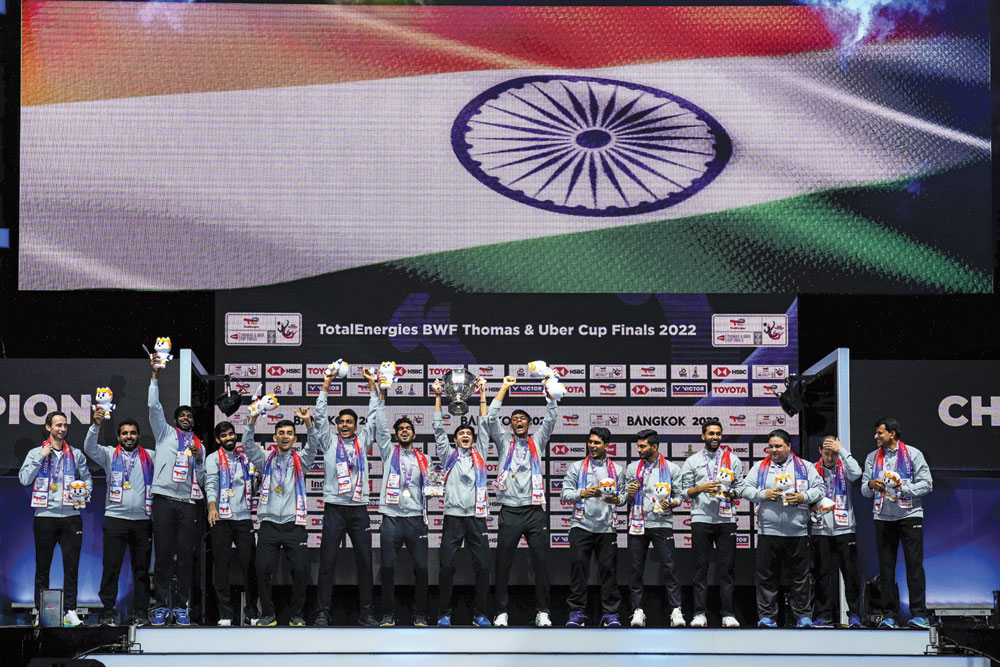 The Indian badminton team after the Thomas Cup finals in Bangkok, May 15, 2022 (Photo: Getty Images)


IT WAS THE day of the massive Thomas Cup semi-final against favourites Denmark and Pullela Gopichand was at an event in Kolkata. India had just scripted a famous win against Malaysia and made the last four against all odds. I had asked him if he was giving his boys a chance. “Absolutely, yes,” said Gopi before adding, “I would have been happier if we got Korea, but with Chirag and Satwik, you know that you always have a chance in the big doubles. Srikanth has got his game back and Prannoy has always had this ability to pull out the big matches. And with Lakshya, you now have someone who is physically at his best and is a hugely improved player.” Gopi was on a roll. “I do think we have a chance of winning the tournament,” he concluded. India has indeed won and scripted history and Gopi, newly elected vice president of the Badminton Association of India and also India’s head coach, stands vindicated.

Without a doubt, the Thomas Cup win is one of the biggest in the history of Indian badminton. To beat the very best in the quarter-final, the semi-final and the final, and to do so convincingly, says a lot about the pool of talent India now has, and there is every reason to be upbeat. “We always needed a system. Without a structure, you will get a one-off good player. But you will never have a team that can win you events consistently,” argues Gopi. That’s what he has been working on for years now. “I am aware our country moves from one Olympics to the other and unless you win an Olympic medal, you aren’t considered a great. Chirag and Satwik had an opportunity in Tokyo and missed out. For me, it is not really something devastating. What is important as a coach is how they are shaping up. If they are fit, the big smashes will be tough for any team to negotiate. They are one of the very best and will have a fair chance in Birmingham at the Commonwealth Games (CWG), and then in Paris [Olympics] in 2024,” Gopi argues.

What is important about the Thomas Cup victory is the resilience and the depth the Indians have shown. HS Prannoy, who had a relatively lean 2021, won some spectacular deciders, and Lakshya Sen, true to his current form, continued his giant-killing act winning some close matches from tough situations. And Srikanth, someone who has always been there and thereabouts but failed when it came to the big push, beat World No 3 Anders Antonsen in what was a huge match in the semi-final. This is not to mention Satwik and Chirag who can beat the very best on any given day.

While we celebrate this win and it is absolutely fair to do so, the real story of this win lies somewhere else. It is in the system that Gopi was talking about. “In the last two years, we have added nearly 4,000 badminton courts in Hyderabad. And we now have close to 6,000 courts in Bengaluru,” says Gopi. His academy now has some 22 courts, and that’s where the revolution really starts. Unlike in the past when players struggled for facilities, India now has enough courts to accommodate the aspiring talent. And with the sports ministry announcing cash awards soon after the win, it will act as an incentive for future stars to take up the sport as a career.

So, how does a country produce a champion? The question doesn’t have a straightforward answer. It is not a mathematical formula, or else it would simply be replicated by every country that can afford it. Also, what do we understand by a champion, Gopi had once asked me. And before I could respond, he started off: “By a champion, I understand a player who knows how to keep winning consistently. To know how to win is an art. Everyone at this level can play well. But not everyone knows how to win. At 17-17, all you need is to be a little more than a good player to close out the game. That’s what our boys were able to do. That’s what has helped them as players. Once they master this process, you will see us winning far more consistently. The process, as I have said, is what is most important. All people see is what players do in tournaments. Sindhu was hailed for playing a 100-minute match at the 2017 Glasgow world championships. Srikanth did get tired after long rallies in the Thomas Cup. Prannoy can beat any top player on his day. Lakshya has improved some 10 notches. Each of these things can happen because we have a robust process in place for each of them. They train based on sport science. Have their own trainers and coaches. They play long rallies, simulate match situations, and perfect particular strokes they need to improve on. That’s why in match situations, they aren’t flustered anymore.”


What is important about the Thomas Cup victory is the resilience and the depth the Indians have shown. While we celebrate this win, the real story lies somewhere else. It is in the system that Gopichand talks about. Unlike in the past, India now has enough courts to accommodate the aspiring talent

In the first four years after Gopi had set up the Hyderabad academy in 2004, not a single sport journalist had entered its confines. “Yes, between 2004 and early 2008, the media wasn’t interested. No one came and no one was really following what I was trying to do or was doing. Not that it mattered because I could do my initial planning away from the glare of cameras, which is actually not such a bad thing,” says Gopi with a smile. Now with the Prakash Padukone facility run by Vimal Kumar and with Gopi’s own in Hyderabad, India has multiple medal-winning factories, if they can be referred to as such.
“We are doing well but to say this is something revolutionary is overdoing it. We need more wins to call it a revolution. We need doubles wins, more super series wins, Olympic medals, an All England title…”

With proper funding and necessary infrastructure in place, India’s badminton structure is now starting to churn out champions, and under Gopi, it is no longer about one or two individuals aspiring to do well at the international level. While there is now a system in place, not all boxes have been ticked yet. The big positive is corporate India has woken up to the potential of the sport and companies have started to invest money in the Olympics in the last few years. The negative, however, is that corporate support continues to be ad hoc. Soon after the men won the Thomas Cup, corporate coffers opened up. For a month now, felicitations will continue. While the money paid to the winning team is much deserved, it needs to be asked if they really need this money anymore or if this support is now misplaced. Sindhu, for example, with close to 20 brand endorsements to her name to go with support from the government’s TOPS scheme, no longer needs this kind of ad hoc support that follows every tournament win. What will make a real difference to the sport is if this money is poured into grassroots-level coaching and supporting the upcoming players aspiring to be the next Srikanth or Sindhu. That, however, isn’t happening yet and it is left to the government and a few private initiatives to take care of the next-generation athlete. That’s where we need a final push. Once it happens, the Thomas Cup win or multiple medals in the forthcoming CWG won’t be a one-off anymore. And that’s when Gopi can relax and take it easy. The legacy would then be in place.