How prepared is the Indian team for the T20 World Cup? 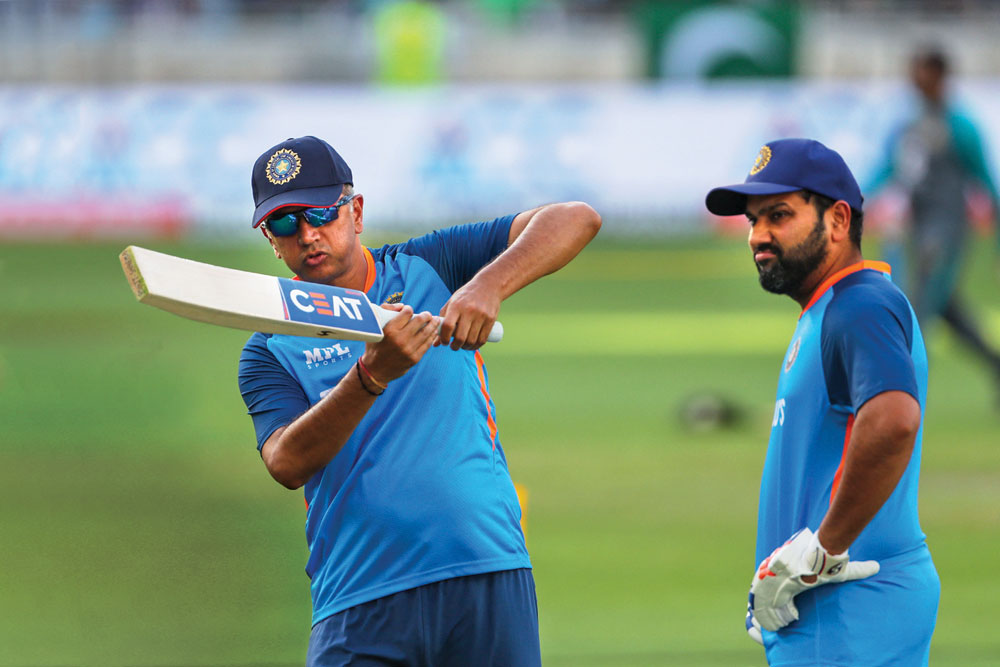 
IN AN INTERVIEW on BCCI.tv in the aftermath of his 71st international century, Virat Kohli, speaking to Rohit Sharma, made an interesting point about his natural game. He said that he needed a few balls, 10-15 to be precise, to get in and take control. And that’s what he wasn’t doing until recently and was trying to go hard from ball one, a strategy that didn’t prove successful for him. In the Asia Cup, he changed tack and went back to what works best for him. Now this is where things get complicated with just a month to go for the T20 World Cup. At the start of the Rohit Sharma-Rahul Dravid tenure, all talk was about a changed approach. A fresh start. Aggression from ball one and a higher strike rate are what we were told was the new mantra. But a failed Asia Cup campaign and things are yet again being scrutinised. There is talk of playing what comes naturally rather than doing something, which is forced. Should there be an Indian template, which suits us more than just trying to copy-paste an approach that has worked for teams like England? What’s best for India going into the World Cup?

If Virat is to be believed, the team management has now given him the licence to play himself in and play the way he wants. It is his way rather than an all-or-noth­ing approach. The question is: Will it work for India in Australia or, more importantly, was it ever to do with approach? Is it approach or team selection? About picking the right players or having them in the mix? In the 2019 ODI World Cup, picking an unheralded and inexperienced Rishabh Pant in Manchester was a mistake and India paid the price. Pant was scarred in the process and it was the Australia tour of 2020-21 that finally allowed him to come into his own. In the T20 World Cup in Dubai in 2021, a half-fit Hardik Pandya was pushed to play and forced to bowl when he was in no position to do so. It was after he had expressed his inability to bowl and was picked in the squad as a spe­cialist batter. In the recently concluded Asia Cup, India played Deepak Hooda at No 7 when Deepak had been brought back and assigned this specialised role.

With a handful of games to get things right before the all-important World Cup clash against Pakistan in Australia on October 23, the team management needs to get both things right. They need to get the best combi­nation in and also formulate the best approach for T20 cricket. In the two matches that India lost in the Asia Cup, the start was brilliant. Rohit was on song and KL Rahul too got going after a while. A 50-plus powerplay was the perfect platform. So, there is nothing to say the all-aggressive approach wasn’t working. What happened against Pakistan and Sri Lanka was the middle order did not fire. Quick wickets slowed down the scoring rate and India ended up 15 short. And that’s where Deepak Hooda could have been the answer.

What I am trying to argue is that while Virat is indeed going to bat in a manner that suits him, the question is will it suit the team? If India gets a very good start, is this the best approach? For example, when the openers have got a quickfire 50 in the powerplay, can any team afford their No 3 batter to take 10-15 balls to get set? While in a 50-over format it is possible, is it the same in T20 cricket? Is there a need to be flexible? Can a player, however good he is, have that many balls to settle in? Not all days can he convert it into a big score and on days he doesn’t, what im­pact will this approach have on the team?

This also brings into focus Virat’s batting position. Should he open with Rohit moving KL to No 3 or 4, based on what we have seen in the Asia Cup? He opens for Royal Challengers Bangalore and has done so for years. Opening the batting is the only way he can have a few extra balls to settle in regularly and if that’s what he needs, getting him at the top of the order is India’s best option. But then what happens to KL Rahul? He too is a versatile opener and got runs against Afghanistan. Can India push him down or even think of going in without him for a start? If we take the example of the 2003 World Cup, we had three fantastic openers in the mix. While Sachin Tendulkar and Sourav Ganguly were India’s most successful and trusted opening pair, Virender Sehwag had to be accommodated at the top of the order. It meant skipper Sourav Ganguly dropped himself down to No 3 and it was a call that changed India’s campaign. Ganguly himself got three hundreds and Sachin had the most phenomenal World Cup ever.

The Asia Cup, now done and dusted, was supposed to give us answers going into the World Cup. It was sup­posed to offer clarity. Give us a sense of what combination India would likely go with in Australia. What we have at the moment is further doubt and many more ques­tions. We don’t have clarity on anything with just weeks left and that’s what Indian cricket needs at the mo­ment. We don’t know who will open with Rohit; nor do we know who will go in at No 3. We have little idea of who will bowl at the death and how match-fit Jasprit Bumrah will be by the time the World Cup comes round.

Winning dead rub­bers won’t suffice and the Australia World Cup could well be the make-or-break for Indian T20 cricket. Rahul Dravid and Rohit Sharma, and perhaps Virat Kohli, more than others, know that and it will be interesting to see what they do in the forthcom­ing series against Australia. To celebrate individual milestones when the team is already out of the competi­tion will mean little and that’s where India will have to get things right. We need Virat, Rohit and Rahul to fire against a charged up Shaheen Afridi and redeem us from what happened in the World T20 in 2021. That’s what will matter to the discernible Indian cricket fan. And that’s what team sport is all about.