What Role Can India Play in the Southern Caucasus? 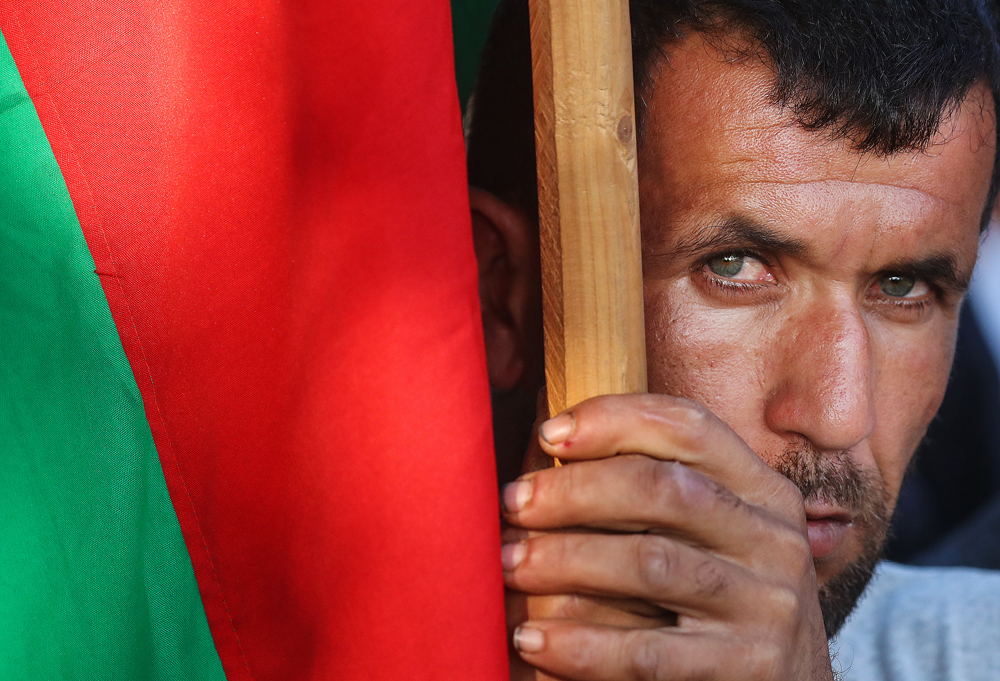 A man attends a funeral ceremony for an Azerbaijani serviceman who died in action in one of the villages bordering on Nagorno-Karabakh (Photo: Getty Images)


On a cold and snowy evening in December 2019 in St. Petersburg when the world was blissfully unaware of what a new decade would bring, my friend and I briskly walked out of the historic Mariiinsky Theatre after watching a classical ballet performance. The brief cab ride from the theatre to an apartment on Vassilevsky Island would quickly shake us off our happy state of mind, as our taxi driver was intent on geopolitical talk. “I like India, but it’s too hot,” the moustached and middle-aged Azeri man told us. Easily guessing his origins from his accent and his face, I replied that Azerbaijan definitely had better weather than India or Russia. This was the point where I felt instant regret for carrying on this conversation instead of just nodding with a smile to his first comment.

The next ten minutes consisted of a near monologue where the cabbie spoke of his hatred towards Armenia and Armenians. “There are ten million of us and just three million of them,” he said, going on about how Azerbaijan had the latest state of the art arms from Russia and Turkey and would crush Armenia. When my friend and I tried to tell him about how age-old enemies in Europe have buried the hatchet and have open borders and that people are happier because of it, the man retorted, “Don’t you hate Pakistanis?” He was shocked with my response when I said I did have problems with the Pakistani government and the geopolitical situation in my part of the world, but considering 200 million people to be a single unit and hating them was beyond me.

I have had similar unwarranted and uncomfortable conversations with Armenians in the resort city of Sochi, who though milder in tone had virtually the same degree of resentment for Azeris.

Those who have read the works of Leo Tolstoy and Mikhail Lermontov would have an idea of the mentality of the common folk in the Caucasus region. These mountainous lands are known for both the outstanding hospitality of their people and the honour codes that have been a part of the wider region even before the advent of Christianity and Islam.

Nagorno-Karabakh and the diaspora

Within a week of the recent fighting breaking out between Armenia and Azerbaijan over the mountainous region of Nagorno-Karabakh, a video taken from a cellular phone on board a Moscow-Baku flight went viral. A passenger complained that one of the food options was “Armenian-style turkey.” He kept demanding an explanation from the airhostess why a flight to Azerbaijan was serving an Armenian dish. The hassled crewmember suggested that the passenger eat lamb, which was the alternate option.

The recent fighting between Azerbaijan and Armenia over the breakaway territory of Nagorno-Karabakh, which is an ethnic-Armenian majority state that has no recognition outside of Armenia, has inflamed passions even further between Armenians and Azeris around the world.

Russia, which hosts people from both countries, is seen as a neutral territory.

The country’s Armenian diaspora is believed to number two million, whereas Azeris in Russia, according to some estimates, number three million. These numbers don’t necessarily include those who choose to identify as Russian since they hold Russian citizenship.

A majority of fruit and flower markets in Russia are run by Armenians and Azeris, but the communities choose to stay away from each other. Unlike Indians and Pakistanis, who are bound by language, culture and common tastes, members of the South Caucasus diaspora speak totally different languages and see each other as culturally incompatible. They don’t have their own equivalent of cricket, Bollywood or common musical traditions.

A large part of the existing tensions between Armenians and Azeris goes back to the geopolitics of post-World War 1 Europe and the formation of the USSR. When Moscow had the upper hand over the crumbling Ottoman Empire and the modern state of Turkey, it did not ensure that its internal republic of Armenia got a fair deal when it came to the boundary question.  Mount Ararat, which is the most sacred place for Armenians since they believe Noah’s Ark was perched on it, can be seen from Yerevan, but is on the wrong side of the Turkish border. At the same time, Nagorno-Karabakh was made a part of the Soviet republic of Azerbaijan even if there was a strong case for it to be a part of Armenia, based on its demographics.

Until the 1980s, when the Soviet Union did not show any sign of imploding, Armenians and Azeris lived in peace. There was a thriving Armenian community in Baku, while Azerbaijanis lived in different parts of Armenia. With the imminent collapse of the Soviet state, tensions flared up over the status of Nagorno-Karabakh. The subsequent war between Armenia and Azerbaijan that led to the republic breaking away and out of Baku’s control resulted in an ethnic cleansing of Armenians in Azerbaijan and Azeris in Armenia and Nagorno-Karabakh. The bitterness has not subsided since.

One of the most painful chapters in the history of the Armenian people is the Armenian Genocide that was carried out by the Ottoman Empire.  The conflict in Nagorno-Karabakh whitewashed the amity that the Armenians and Azeris enjoyed in the Soviet days and reminded the former that the latter are indeed an ethnic Turkic group.

Turkish interference in the southern Caucasus after the collapse of the USSR has only made matters worse. It’s hard for Armenia, a small country of three million, not to feel intimidated when its arch foe has the financial and military backing of a country that committed (and denies) a mass murder of 1.5 million Armenians!

When Russian President Vladimir Putin was asked this month whether the country would assist Armenia in the conflict with Azerbaijan, he said the Collective Security Treaty Organisation (CSTO), a Moscow-led alliance of seven former Soviet states, could only help Armenia if its territory was attacked. His argument was that Nagorno-Karabakh was a part of Azerbaijan. This message, which was intended towards Turkey as much as Azerbaijan, essentially ensures that the fighting does not spill over to Armenia.

Armenia is a member of the CSTO and the Moscow-led Eurasian Economic Union, both of which Azerbaijan has stayed clear of, but Baku is too important a partner for the Russians to lose. This is precisely why a wider conflict between the two former Soviet states hurts Russia the most and benefits Turkey, which sees the Southern Caucasus as its area of influence. The Armenians get much less sympathy in the corridors of the Kremlin than they did a few years ago, thanks in part to Yerevan having a government that is looking to steer the country away from Russia and looking towards Europe.

Either way, a weakened Armenia is exactly what Turkey’s Recep Tayyip Erdogan would want in its game of one-upmanship with both Russia and Europe.

As soon as the latest round of fighting broke out between Armenia and Azerbaijan, South Asian social media warriors tried to control the narrative. Twitter accounts from Pakistan tried to show how the country stood in alliance with Azerbaijan and Turkey. Armenian Twitter warriors managed to get the support of Indian nationalists and in this age of fake news, an India website claimed Pakistani fighters were assisting the Azerbaijani army in the conflict!

India’s Ministry of External Affairs has shown the tact that has been a hallmark of Indian diplomacy. India enjoys good diplomatic relations with both Armenia and Azerbaijan. It’s true that the latter calls for UN resolutions to be implemented on Kashmir, but it would be ludicrous to consider all countries with that position as India’s enemies. Azerbaijan, which has the UN recognition of its sovereignty over Nagorno-Karabakh, is expected to play the UN card on Kashmir, while maintaining friendly ties with India.

What is also being lost in the cloud of misinformation is that the conflict in the southern Caucasus is not some sort of holy war. Azerbaijan, though culturally and diplomatically close to Turkey, is secular and the Aliyev family that has run the country since the 1990s is not keen on following in Erdogan’s footsteps.

Yes, Armenia does support India’s position on Kashmir and is a genuine friend of India, but that doesn’t mean New Delhi should compromise its relations with Baku. Those who have travelled to the southern Caucasus from India will recount tales of how easy it was to visit Azerbaijan, which provides an e-visa for Indian citizens. Armenia does the same now, but until a few years ago, Yerevan made Indian citizens jump through hoops for a visa.

Given the fact that India is a genuine neutral player with no historical baggage in the southern Caucasus, and that both warring parties are open to mediation, this conflict may give New Delhi a genuine chance to at least punch at its weight in global affairs.  The Nagorno-Karabakh conflict is complicated and takes into question several factors such as the will of a majority living in a territory, the right of displaced people and their families, and the role of the United Nations.  Yet, a compromise between Armenia and Azerbaijan could end decades of hostility and help economically transform the strategically important southern Caucasus.