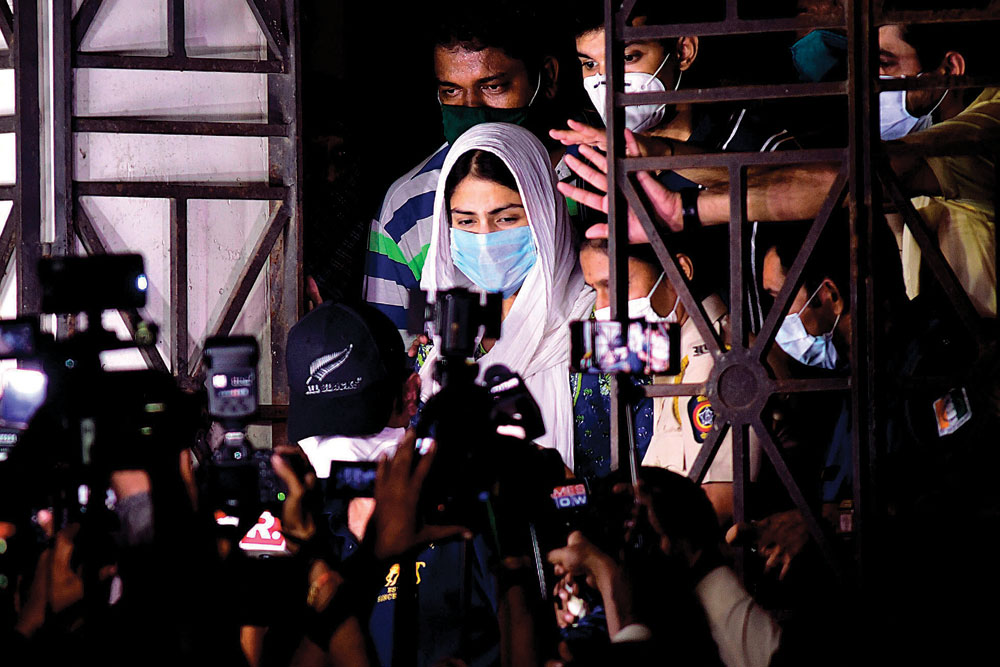 
ANY REASONABLE DECENT human being can see what Rhea Chakraborty is going through is a travesty, a Kafkaesque black hole triggered by the opportunism of politicians out to settle scores and television channels salivating over a delicious conspiracy of their own imagination. Nothing so hypnotises the public as the tearing down of beautiful and wealthy men and women by hungry lions. So long as they think if it is deserved, their conscience allows themselves the show. Expending anger at Chakraborty’s vilification seems somewhat pointless, however, when the entire justice system has collapsed in this country. Go to any court or police station and you will see innumerable people in horrible traps from all sorts of agencies, ranging from policemen to politicians. There is really no redress to a problem if only one case is looked at in isolation and this goes for all the weapons used against Chakraborty.

There is agreement among the woke left liberals of Twitter that Rhea is being subject to a media trial and online mob lynching. It is true. But the thing about online lynchings is that no one who is in the mob thinks he or she is part of one. To any member of the current mob, the vilification that is ongoing is justice. Alone and in the real world, they might be horrified at throwing calumnies on a woman, but as a faceless group, it feels right because there are so many thinking likewise. Meanwhile, those not part of this blood lust at present find media trials and mob lynchings an affront when due process is a promise given to everyone. Except that many in the group that has now discovered this have been part of online mob lynchings in the past. Take, for example, the MeToo movement of two years ago, when all of Twitter exploded with allegations and accusations of sexual harassment, where rape was conflated with desperate WhatsApp propositions of lonely men, and groups in unison would descend and hound a man out of job, family and society. Due process was considered a needless irritant then.

Once you open the gates, all sorts of animals are going to walk in and they will be more cunning and vicious than you. Consider how easily Chakraborty’s defaming was turned into a national issue dividing apolitical people into two camps—innocent and guilty, corresponding to different political ideologies. So long as the idea of a good media trial versus bad trial, a good mob lynching versus bad mob lynching exists, you can be sure that there will be no cure for the disease. For liberal wokes the bad news is that, in India unlike in countries like the US, they are being routed in the social media wars. Most media trials and mob lynchings are not going to be the ones they can relish or participate in. In strategic interest at least, they are better off questioning the foundations of these phenomena instead of using them as weapons too. But that is really not going to happen.