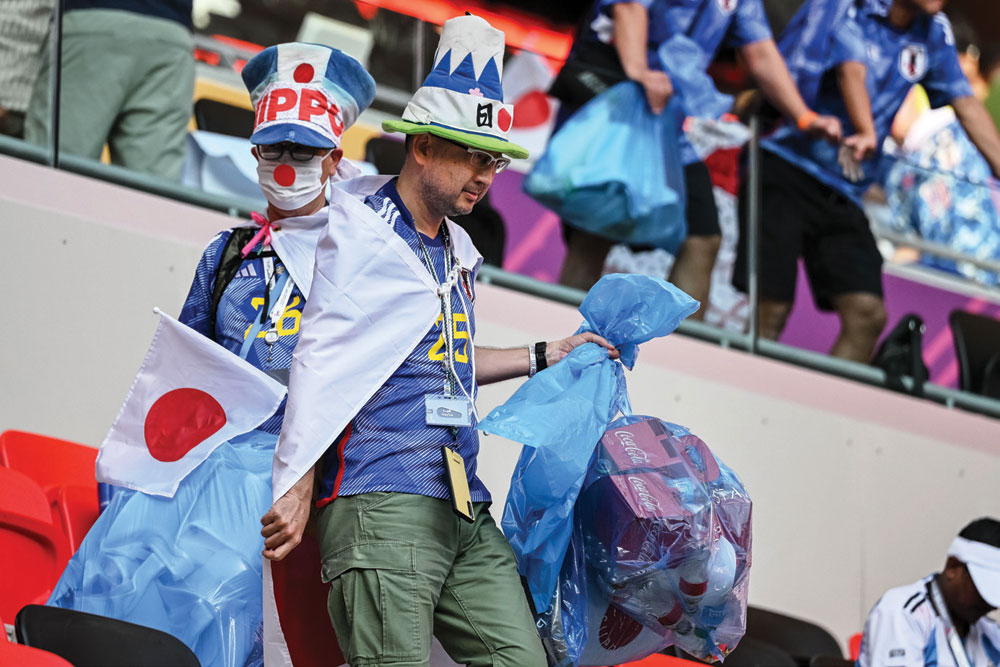 
TOKYO IS AN enigma. And at the heart of this puzzle is the lack of dustbins. How do you take a city of 30 million people, with Metro lines so packed that people literally have to be shoved into the cabins by professional pushers, and square it with the kind of cleanliness that to Indians is the equivalent of pigs having grown wings? Especially, given the egregious lack of public trashcans.

Japan is foodie heaven, and I spent my years living there constantly grazing on soothing bowls of soba, glutinous gobs of mochi, and flavours of ice-cream undreamt of elsewhere—black sesame, sweet potato, bitter melon. But there was a problem that this gluttony entailed—a constant hunt for somewhere to dispose of the accumulated napkins, bottles, and other miscellanea collected as one chomped one’s way about.

I decided to investigate the reasons for this confounding litterbin lacuna. Its origins lay in the 1995 sarin gas attacks by the Aum Shinrikyo doomsday cult, which left 12 people dead on the Tokyo subway. In the immediate aftermath, waste receptacles were first sealed and then removed entirely from train stations and many other public spaces. But, unlike in other countries where similar measures have been undertaken following terrorist attacks, the trashcans were never brought back, forcing residents to adopt some of the world’s more disciplined waste disposal techniques.

Today, it’s believed that public bins would only discourage people from recycling, by giving them the easy way out. Instead, the idea is to nudge folk into taking their trash home to subject it to a recycling system that is truly operatic in scale and complexity. Legislation dating to the late 1990s mandated that every household had to separate waste into burnable and non-burnable categories. But this is just the tip of the recycling iceberg. There is a vertiginous array of categories to further sort non-burnable into plastic and PET (polyethylene terephthalate), cardboard and glass, spray cans, and old cloth.

The municipality I had lived in issued residents with a Mahabharata-sized manual on how to sort some 500 different items. For example: lipstick was usually “burnable”, but an empty tube went into “small metals”. Milk cartons had to be rinsed with water, cut open, and dried, then bundled together with items of the same size, with a paper string. That is unless the interior was processed with an aluminum or wax coating, in which case they went in the non-burnable garbage. We got off lightly. Kamikatsu town in Japan’s Tokushima Prefecture had mandated that garbage be sorted into 45 different types across 13 categories of trash, all in pursuit of its goal of achieving zero waste.

Businesses had to pay—based on weight and volume— for recyclables to be collected. And households had to put their trash for collection in local authority-designated clear bags. PET bottles and glass jars would glint like opals in the sun; they were rinsed so clean before being put out. But if the trash was sorted incorrectly, it was simply not collected. Instead, a large red sticker was pasted prominently on the bags, leaving the miscreant crushed under the weight of neighbourhood social shame.

On a crisp spring Sunday afternoon in 2019, I joined a friend for an outing to one of Tokyo’s coolest cocktail joints. Narrow rectangles of burnt amber and orange formed a veil of terracotta, reminiscent of falling rain, over the concrete surface of the modernist building. Inside, a long-haired guitarist crooned ‘Beauty and the Beast’. The space was buzzing with hipsters quaffing artisanal drinks of citrus fruit and shitake mushrooms.

But there was a twist and a rubbish one at that. The cocktail sippers were watching thousands of tonnes of garbage: plastic bags, food waste, and paper being lifted and churned by a gigantic mechanical claw. The cocktails were in fact made of fruit and fungi that had been rejected by supermarkets due to their ‘unacceptable’ texture or shape. The canapés were made of recently expired ingredients. This was the Garbage Pit Bar, named for its location inside the waste disposal centre of Musashino, a western suburb of Tokyo.


In the recently concluded FIFA Football World Cup, the Japanese team did not make it through the round of 16. But the Japanese fans undoubtedly won the gold medal for spectators, given how they left the stadium spick and span after every game

Tsutomo Takahashi, the plant supervisor, explained that the idea of starting this pop-up bar had come from the municipality’s epiphany that garbage needed a “change of image”, from an annoyance that no one wants to think about to something important that everyone should think about.

The processing centre in Musashino handled about 80-100 trucks daily, each packed with some 140,000 kg of trash. It took up to three hours to burn 2,500 kg of burnable trash and reduce it to ash. The flue gas released as a byproduct was used to turn electricity-generating turbines that powered all the processing centre’s operations, in addition to supplying electricity to nearby buildings like the City Hall and District Community Centre.

And that was not all. The ash generated was used as a construction material mixed into cement. PET bottles were recycled into new bottles, fabrics, and stationery like ballpoint pens. I discovered that the jerseys of soccer teams like Arsenal, Manchester City, and Barcelona have been made of recycled PET bottles from Japan for years.

A major problem with waste that most countries have is with household plastic, a lot of which either gets burned, causing enormous air pollution, or is buried in landfills, leading to environmental contamination. In India, for example, an eye-popping 3.5 million metric tonnes of plastic waste is generated annually, according to the Central Pollution Control Board.

In Japan, over 70 per cent of PET bottles, 77 per cent of other plastic, and over 90 per cent of aluminum cans are recycled. But while Japan might rank second only to Germany in the world for plastics management, the figures could be deceptive.

The archipelago is in fact one of the largest exporters of plastic waste—so the recycling rates mentioned above apply only to whatever waste remains inside Japan. According to the Japan External Trade Organization (JETRO), in 2020, Japan exported 820,000 tonnes of plastic waste to Southeast Asian countries like Malaysia, Thailand, and Taiwan—some 46 per cent of the total.

There are countries that have better recycling rates than Japan, but the archipelago is unique in the civic culture of cleanliness it has fostered. During the spring, when the cherry blossoms in Tokyo bloomed in their two-week-long splendour, the city’s parks were filled with bacchants, drinking themselves silly under the petalled parasols of the trees. Yet, every group of revellers brought their own gomi (rubbish) bags into which they placed all empty bottles and food packaging. Even the drunkest of sakura enthusiasts staggered home only after ensuring that not a paper napkin had been left in her wake. As an Indian, for me, this kind of behaviour was almost more extraordinary than the cherry blossoms themselves.

In the recently concluded FIFA Football World Cup, the Japanese team did not make it through the round of 16. But the Japanese fans undoubtedly won the gold medal for spectators, given how they left the stadium spick and span after every game, cleaning up not only after themselves but also likely after visitors from less waste-conscious countries.