Dhoni passes the CSK baton while keeping his aura intact 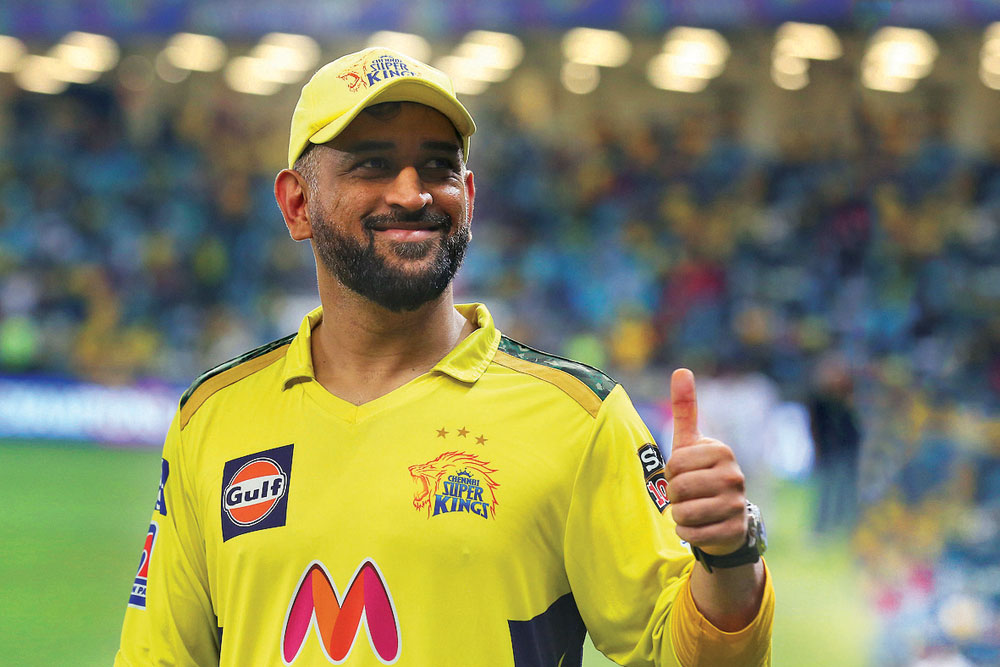 
IT WAS LIKE all things Dhoni. No prior intimation. No brouhaha. No melodrama. Just a matter of fact decision conveyed in the most matter of fact manner. Is it the right time to hand over the baton to Ravindra Jadeja and will this prolong MSD’s (Mahendra Singh Dhoni) career as a Chennai Super Kings (CSK) player?

The answer is yes. Jadeja, with an exceptional 2021 behind him, is ready to take over the mantle. At the same time, there is still no rival to MSD the batsman and wicket-keeper in the CSK ranks. The franchise needs him and by deciding to hand over the reins to Jadeja, Dhoni has only helped strengthen the team. With the pressure of captaincy off his shoulders, he can now concentrate more on his batting and perhaps even continue to play on till IPL 2023.

MS Dhoni has got most timings perfect. Maybe that’s why he is one of the best finishers in the business. Except the 2019 World Cup, which was a rare imperfect finish from the perfect finisher, Dhoni has literally always got it right. He did so yet one more time when he gave up on the CSK captaincy and handed the reins to Ravindra Jadeja. Dhoni, who doesn’t play international or domestic cricket anymore, will surely find it hard to continue with the same consistency going forward in IPL. No one knows it better than the legend himself. It was time to pass the baton so he could enjoy his cricket and also be the leader that he is. And groom the next in line while making the franchise stronger. Let me make this clear. He stays leader in the CSK camp and in the dressing room and always will be. Jaddu, on the other hand, is at the peak of his powers and can easily captain CSK for the next three to four years under the able guidance of MS Dhoni. The two share a fantastic bond and that will only help the franchise going forward.

To go back to an incident MSD had once told me about the 2019 World Cup semi-final. He had mentioned to me that when Jadeja was batting with him in that fateful semi-final against New Zealand, he was calibrating for them both and making plans for the next few overs. In sum, he was grooming Jaddu for the challenge and needless to say the two of them had got India agonisingly close to the target. What Dhoni was doing at the crease is what he will do now in the dressing room. In 2019, he was helping groom Ravindra Jadeja the batter. Now he will help polish Jadeja the captain.

Look at the timing of the decision. It just couldn’t get any better. Jadeja will relish the opportunity of leading one of the most successful IPL teams and coming just ahead of IPL, it will give that little extra fillip to a performer ahead of the biggest spectacle. And for Dhoni, it will allow him to play with that extra freedom, which he perhaps needs at this stage of his career. While he will still advise from behind the wicket and from the change room, Jaddu will now be the man in the hot seat getting battle-ready for the future.


Dhoni is clearly all about doing things at the right time. He did so yet again when he gave up on the CSK captaincy. To win IPL in 2021 after a poor outing in 2020 was the final proof of the pudding. A team labelled as ‘dad’s army’ went on to win the tournament against all odds

What will this decision mean for CSK fans more specifically and for IPL fans at large? Needless to say, each will miss Dhoni the captain. MSD at the toss or at the post-match presentation was always an attraction and was more like an emotion and a habit. While it will take time to adjust to the change, it will also mean each one of us will crave to hear from him that much more. From a marketing point of view, this decision has a stroke of genius. It adds that extra emotion to the franchise that is so very important in uniting fans just ahead of IPL. All of a sudden, fan passion has increased a few notches and any marketing czar would be proud of the call. Not without reason is MSD called one of the best CEOs who never really cared for the title!

Sport is all about winning the big moments. The timing. That’s what separates the men from the boys and the greats from the ordinary. And that’s what the real legacy of MS Dhoni is all about. The 2011 World Cup was a poor one for Dhoni the batsman. Up until the semi-final at least. Till then, there was not much from the skipper that one could rave about. And when India were two down in the final for nothing chasing a very challenging Sri Lankan score of 274, it was expected that Yuvraj Singh, the player of the tournament, would walk down the Wankhede steps to take on a pumped up Lasith Malinga. Not so. The man who walked out was MS Dhoni. Perhaps the biggest captaincy decision of his life. A decision that could have cost India the World Cup, and it is a cliché to suggest that it’s the winner who takes all in sport. Dhoni, with the pressure of a billion, played a blinder and in doing so sent out a clear message to one and all—he was different and also one of India’s best limited overs players of all time. The timing was perfect. As captain, the debate had been put to rest. Having won the World T20 in 2007 and the 50-over World Cup in 2011, Dhoni was indeed the best skipper in the shorter formats of the game.

If World Cup 2011 was his giant leap into immortality, handing the ball to Joginder Sharma in the final of the 2007 World T20 was another such moment. Had India lost to Pakistan in that final, the MSD legend would not be written. Yet again, he got it right. He would be castigated for committing a herculean blunder and costing India the tournament had the timing gone wrong. But as we now know Dhoni is destiny’s child. Misbah, after launching Jogi into the stands and making it easy for himself and Pakistan, played a disastrous shot and was caught at short fine leg. As the catch fell into Sreesanth’s hands, Dhoni’s stocks had scaled the skies. Here was someone who could think and do things out of the box and do them time and again.

Dhoni is clearly all about doing things at the right time. His record in major tournaments and all his key decisions stand testimony. To win IPL in 2021 after a poor outing in 2020 was the final proof of the pudding. A team labelled as “dad’s army” and also impacted by injuries went on to win the tournament against all odds. And in the play-offs against Delhi, Dhoni played a blinder scoring 18 off 6 deliveries. It was his only innings of impact in IPL 2021 but one which defined the tournament for the Chennai franchise. And now, having given up on captaincy, he goes out as defending IPL champion. It is a record unmatched and that’s what adds to his aura. As Kasi Vishwanathan, CEO of the Chennai Super Kings, says with a smile, “For us MS Dhoni will be the leader forever.”

Few can argue with him about this. As I said at the beginning, the timing is perfect. Yet one more time, MSD got it right.