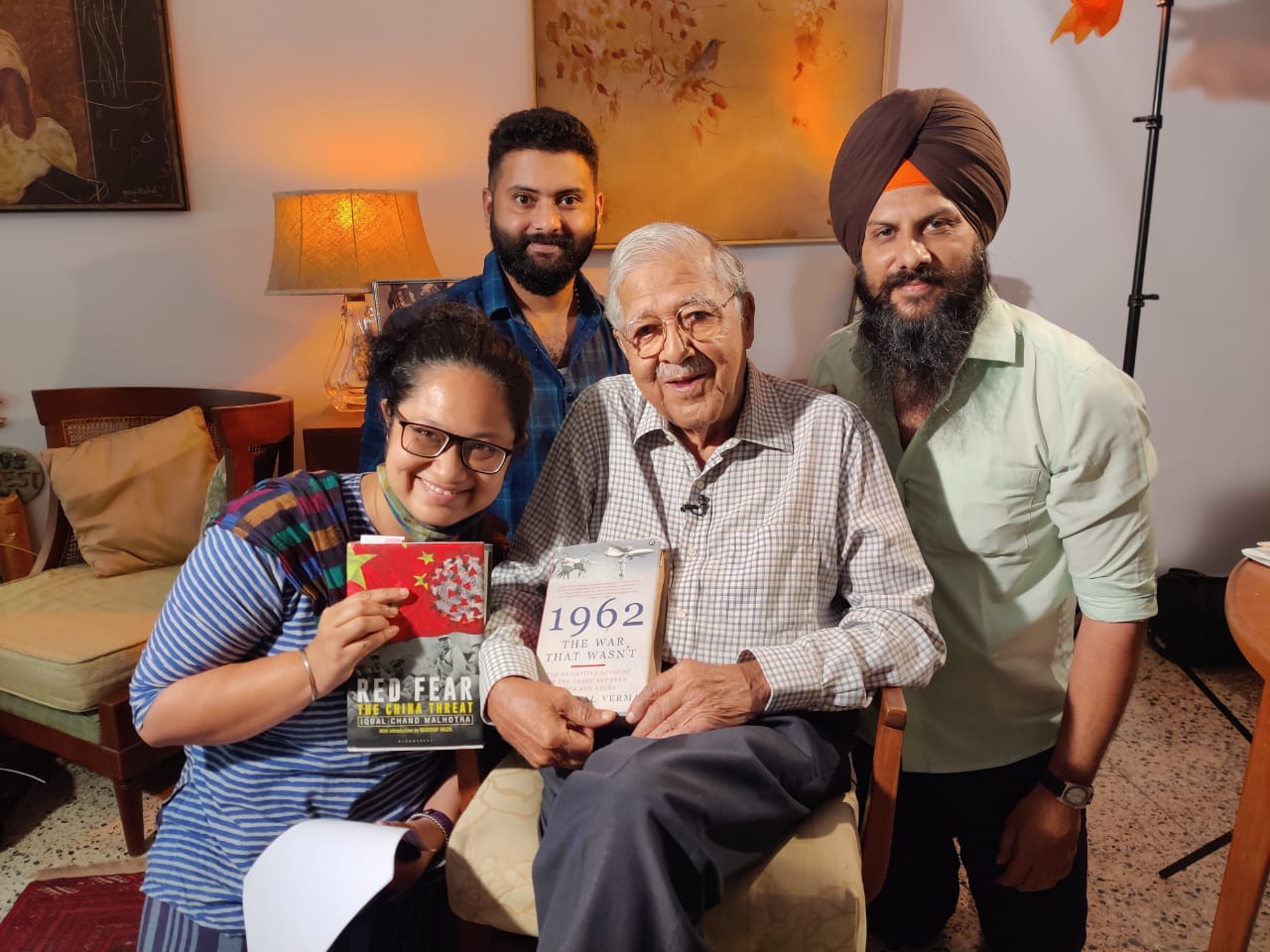 Wing Commander JM Nath with some of his admirers


In my book, Red Fear: The China Threat, published last November by Bloomsbury, I revealed that the Indian Air Force (IAF) conducted hundreds of aerial reconnaissance flights over Xinjiang and Tibet between 1960-62 and that these flights so mortified Chairman Mao that he desperately launched the Sino-Indian war in 1962 as a diversionary tactic to put an end to these flights. The reason that Mao was mortified was because China was preparing for its first nuclear test since June 1959 under the aegis of Project 596 and feared IAF bombing of Lop Nor, among other things.

On New Year’s Day in 1960, Squadron Leader (later Wing Commander) JM Nath reported for duty to 106 Squadron of IAF based at Bareilly. The squadron had been newly raised on May 1st, 1957, and was equipped with the then state-of-the-art English Electric Canberra PR.57 high-altitude long-range reconnaissance aircraft. Someone with great foresight in Air Headquarters (HQ) anticipated the need for accurate air reconnaissance as far back as 1953 and convinced the Ministry of Defence to place orders for these aircraft which were then just being introduced in the Royal Air Force (RAF) in the UK.

106 Squadron, which later moved to Agra, had been tasked to survey the Gilgit Agency, south-eastern Sinkiang, Aksai Chin, south-western Tibet, central Tibet and south-eastern Tibet. In one of those reconnaissance flights towards Sinkiang, probably at the end of 1960, Nath saw troops on the Aksai Chin road. His aircraft was equipped with one camera for survey and four additional cameras for taking pictures. The findings were later reported on maps and whenever the air crew spotted something interesting, they switched on the photographic cameras. This information was sent to Air HQ in New Delhi.

The Chinese protested that in a four-month period (March to June, 1962), there were 180 violations of Chinese air space by IAF aircraft. It was clearly a sign of intense desperation and helplessness for the Chinese to concede such a humiliating fact about their abject impotence before IAF. There are no indications of any Chinese violations of Indian air space during the same period. This clearly shows the absence of any Chinese aerial reconnaissance, air defences and the absence of PLAAF interception capabilities.

Why were the Chinese so edgy about Aksai Chin and IAF’s reconnaissance flights? Did Squadron 106’s Canberras overfly some sensitive and highly secret Chinese installations or did they skirt past these installations that made the Chinese think of creating diversionary measures to put an end to these flights once and for all?

This brings us to what conspiracy theorists would call an alternative hypothesis and which would probably be looked down upon by purist historians who model themselves on the basis of published archival accounts only.

Project 596 was the People’s Republic of China’s (PRC) independent nuclear project after Khrushchev decided to pull Soviet scientists out of their assistance to the Chinese nuclear programme on June 20th, 1959. The very next month, the then head of China’s nuclear programme, Qian Sanqiang, who made the first expeditionary trips to the Tarim Basin in Sinkiang in 1950 and identified Lop Nor as the site for the proposed Chinese nuclear tests, flew to East Germany to meet with former Manhattan Project physicist and convicted Soviet spy Klaus Fuchs. Fuchs had been jailed in the UK in 1950 and released from London’s Wakefield Prison on June 23rd, 1959. He immediately immigrated to Dresden in the erstwhile GDR. In their book, The Nuclear Express: A Political History of the Bomb and its Proliferation, the authors Thomas Reed and Danny Stillman suggest that Qian Sanqiang, who was the designated brain behind Mao’s bomb, obtained a ‘full tutorial’ on the design and operation of ‘Fat Man’, the first US bomb. It still took the Chinese five years from this point to detonate their first nuclear bomb at Lop Nor on October 16th, 1964.

One could safely argue that in 1962 China was half-way there and desperately wanted to maintain a cloud of secrecy over this entire area as uranium mining was going on in both the Tarim Basin and Aksai Chin. The bomb detonated by the Chinese in 1964 was based on the nuclear fission of Uranium-235 derived from uranium ores extracted from the Tarim Basin and Aksai Chin. So how could the Chinese stop the reconnaissance flights of 106 Squadron? What must have troubled the Chinese no end was that they were caught in a crossfire of reconnaissance flights. From Taiwan, the Republic of China pilots were flying U-2 spy aircraft with high-resolution cameras deep into China. These flights covered a number of locations in mainland China. Further, a US satellite reconnaissance programme code named CORONA produced a quantum leap in the US ability to spy on China. A December 1961 CORONA mission provided the first coverage of Lop Nor. Obviously, if the Indo-US intelligence exchange agreement signed in 1949 was working well, Squadron 106 could have double-checked the initial intelligence from both the U-2’s and CORONA?

What was actually happening under cover of the aerial reconnaissance of Aksai Chin? Was the IB Chief BN Mullick providing the coordinates of the areas that were to be surveyed and later destroyed? Was CIA Chief Dulles receiving this output as well? Was there a top-secret plan to bomb Lop Nor and was this what worried Mao no end?

In an hour-long telephone conversation that I had with Wing Commander Nath on February 12, 2021, Nath told me that during this period of January 1960 to October 1962, he personally made two flights from Agra to Lop Nor and back taking hundreds of photographs of the southern perimeter of the lake. He also flew over Lhasa a few times at the low level of 4,000 feet from the ground. Each flight generated almost 3,000 photographs of the area reconnoitred. In his flight logs, these flights were listed as ‘special tasks’. In other words, they were “off the books” or what are today called ‘black ops’.

Nath also recounted that these black ops flights were directly sanctioned by CAS Air Marshall Aspy Engineer whose fifth-floor office at Air HQ was next to the photo reconnaissance office and each consignment of photos were passed by the chief before going to other destinations.

From 1947 till 1971, under an agreement, the IB had a Special Liaison Officer (SLO) from MI5 assigned to it in New Delhi. The SLO was at IB HQ in New Delhi every day. All intelligence on communist countries was shared with MI5, including the photographs generated by Nath’s flights. It is open to question whether MI5 in turn shared this information with the CIA or whether Mullick directly passed this on to Dulles at the CIA? Undoubtedly, this intelligence product was so vital that the Soviets would also have been interested. It is well established that both MI5 and MI6 were riddled with Soviet spies and if this information flowed to Moscow, it would have found its way to Beijing too. Such matters are never committed to writing in voluminous official files. Ministers and officials are careful not to commit on paper, even in top secret files, events that are at variance with the Government’s public posture or those that could turn out to violate the prevailing moral principles of those times.

Imagine the impotence of Mao when he was confronted with the results of IAF’s snooping over his ultra-secret nuclear programme being pursued in the back of beyond.

In the absence of access to classified records from India, China, UK, US or Soviet records, it is difficult to further project our hypothesis. Suffice to say that we can only speculate about what could have been the case if India had unencumbered decisive political leadership and had used the actionable intelligence from Xinjiang, and if she also had the political will to have used her Canberras to bomb Lop Nor during its inception period and also when the PLAAF was on the backfoot in Sinkiang and Tibet.

Postcards from My Past Lives