Sorrow cannot touch the learned person who has conquered his senses 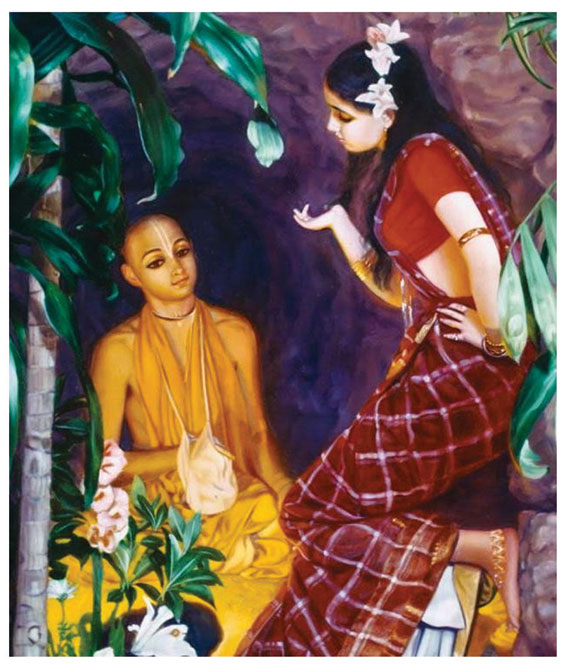 NOT TOO MANY people know about Pingala the courtesan. Her story also figures in the Bhagavata Purana. For the moment, since I have been talking about Gitas in the Mahabharata, let me mention Pingala Gita. This is the first Gita in ‘Moksha Dharma Parva’ of ‘Shanti Parva’ and Pingala is the same courtesan. A Brāhmana comforts King Senajit and tells him about the story of a courtesan named Pingala.

Yudhishthira said, ‘O grandfather! You have spoken about how one can resort to raja dharma. O king! You should tell me about the best dharma for those who are in the ashramas.’

Bhishma replied, ‘There are many doors to dharma and rites are never unsuccessful. Everywhere dharma, the path to heaven, truthfulness and fruits of austerities have been indicated. Whatever good policy one has thought of and has determined to observe should be understood as the only one—there being no other. Whenever one reflects that the ways of the world are without substance, there is no doubt that non-attachment is generated. O Yudhishthira! When the ways of the world are like this, with many taints, an intelligent man must try to accomplish the objective of moksha for his atman.’

Yudhishthira asked, ‘O grandfather! When riches are destroyed and a wife, a son or a father dies, how can one use one’s intellect to dispel that sorrow? Please tell me that.’

Bhishma replied, ‘When riches are destroyed and a wife, a son or a father dies, one laments in grief. However, one must act to dispel that sorrow through meditation. In this connection, an ancient history is recounted about the words that were spoken by a Brāhmana to Senajit, when the king was tormented by grief on account of his son and was distracted with misery. On seeing that his face was sorrowful, the Brāhmana spoke these words.’

The Brāhmana starts to speak to King Senajit now: ‘You are as dumb as a millstone. Why are you sorrowing? What are you grieving about? There are those who will sorrow over you and those mourners will also advance towards the same end. O king! You, I and all the others who surround you, all of us will go to the place where we have come from.’

Senajit asked, ‘O Brāhmana! O one who is rich in austerities! What intelligence, austerities, samadhi, jñana and learning can be obtained, so that one does not succumb to lassitude?”

The Brāhmana replied, ‘Behold. All beings are tied down in misery. For me, my atman is not mine. But the entire earth is mine. What is mine also belongs to others. Because of this intelligence, I am not distressed. Having obtained this intelligence, I am neither delighted, nor distressed. Just as a piece of wood approaches another piece of wood in the great ocean, comes together and drifts apart, that is the way beings meet each other. [This is a verse that is often quoted.] Sons, grandsons, kin and relatives are like that. One should not be attached to them, since separation from them is certain. Your son came from what cannot be seen. He has gone to what cannot be seen. He did not know you. You did not know him. Who are you? Who are you sorrowing over?’

‘Misery is an affliction created by thirst. Happiness is created by the affliction of sorrow. Then again, misery is repeatedly generated by joy. Unhappiness comes after happiness. Happiness comes after unhappiness. Misery follows joy and is again followed by joy. Unhappiness is not permanently obtained. Nor is happiness permanently obtained. Indeed, well-wishers are not the reason for happiness. Indeed, enemies are not the reason for unhappiness. Wealth cannot be obtained through wisdom. Nor indeed can riches bring about happiness. One cannot obtain riches through intelligence. Nor is stupidity the reason for penury. It is only a wise person, and no one else, who understands the progress of the world. The intelligent, the foolish, the brave, the coward, the dumb, the wise, the weak, the powerful—all of them enjoy their share of happiness because of destiny. The cow simultaneously belongs to the calf, the cowherd, the master and the thief. But it is certain that the cow actually belongs to the person who drinks her milk. [The others have an illusory sense of owning her. One should not sorrow because of an illusory sense of ownership.] Those who are the most foolish in the world and those who have attained supreme intellect—only these men can enjoy happiness. Those who have obtained happiness through their intellect and those who are free from opposite sentiments (like happiness and unhappiness, pleasure and pain) devoid of jealousy are never distressed by prosperity or adversity. However, there are also foolish people who have not obtained that intelligence. They have not been able to go beyond excessive delight and extreme torment. There are foolish ones who are bereft of consciousness. They are immensely haughty because of their strength and are given to constant delight, as if they are like devas in heaven. However, because of their laziness, such happiness terminates in unhappiness. And because of skill, unhappiness can give rise to happiness. Riches and prosperity dwell with those who are accomplished, not with those who are lazy.’

‘Whether it is happiness or unhappiness, whether it is hated or agreeable—whatever has been obtained must be honoured with an unvanquished heart. From one day to another day, there are a thousand reasons for misery and a hundred reasons for joy. Stupid people are submerged in these, but not those who are learned. If a man is intelligent, accomplished in his wisdom, given to serving seniors and lack of envy, and is self-controlled, having conquered his senses—sorrow cannot touch him. A learned person resorts to this intelligence and guards his consciousness. Sorrow cannot touch a person who knows the origin and the end of everything. The reasons behind sorrow, fright, unhappiness and exertion must be severed from the roots, like casting aside one of the limbs in the body. If objects of desire are cast aside, this fills one with happiness. Indeed, a man who follows desire is destroyed by that desire. The happiness obtained from the pursuit of desire in this world or the great bliss obtained in heaven is not even one sixteenth of the happiness obtained from the extinction of thirst. The karma committed in an earlier body, auspicious or inauspicious, and the consequences of those deeds are enjoyed by the wise, the foolish and the brave. In this way, the pleasant and the unpleasant, unhappiness and happiness, circulate among living beings. Knowing this and resorting to this intellect, a person with qualities lives in joy. He shuns all desire and turns his back on attachment. The wise regard this kind of conduct of the heart as mental death. A tortoise draws in all its limbs. Like that, such a person draws in desire and finds pleasure in his own radiant atman. Even if there is the slightest sense of ownership left, that will give rise to repentance and pervade everything. He is not frightened of anything. No one is frightened of him. He has no desire and no hatred. He is then immersed in the brahman. He gives up truth and falsehood, sorrow and joy, fear and freedom from fear, pleasant and unpleasant. Having abandoned these, he is serene in his atman. That patient person does not do anything wicked towards any being, in deeds, thoughts and words. He abandons the thirst that is so difficult for the evil-minded to give up. Even when one ages, it is not digested. It is like a disease that brings an end to life. Having done this, he obtains happiness.’

Though this Gita is named after Pingala, it is only after all this that we come to Pingala. ‘O king! On this, a verse sung by Pingala has been heard. This is about how she obtained eternal dharma at a time of hardship. A prostitute named Pingala went to the place meant for the rendezvous, but was rejected by her lover. Despite facing that calamity, by resorting to her intellect, she found peace.’

Pingala said, ‘I have been crazy for a long time. In my madness, I have dwelt with my beloved. Because my beloved was nearby, I did not pursue the path of the virtuous earlier. This pillar has nine gates and I will cover it. [The body is the pillar and the nine gates are two eyes, two ears, one mouth, two nostrils, one anus and the genitals. It will be covered with knowledge.] Even when the brahman approaches, which woman in this world regards him as a beloved? I have been thwarted in my desire. But, in the form of desire, those crafty human lovers are like hell. They will not deceive me again. I know now and have woken up. Depending on destiny and earlier deeds, adversity gives rise to prosperity. I have now conquered my senses and have obtained the realisation that I am without form. I am without any hope and am happy. There is great happiness when there is nothing to hope. Having destroyed hope, Pingala sleeps in happiness.’

The Double Life of KM Ganguli