A Fistful of Fury

When the 'Gypsy King' rose from the dead in Los Angeles, defying both belief and the referee’s count, heavyweight boxing came alive in the 21st century 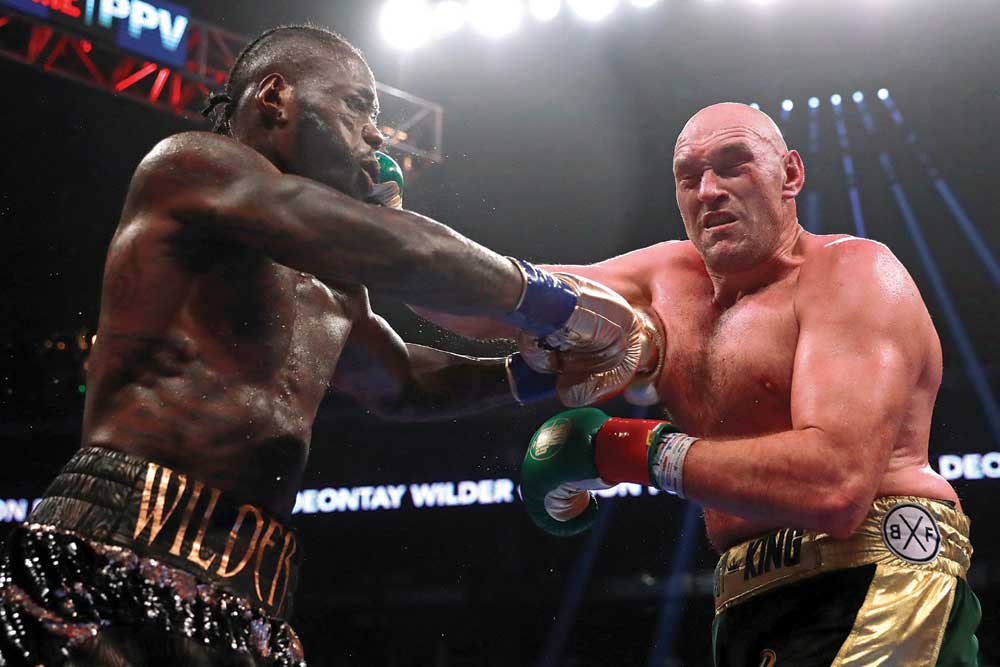 Boxing is not a metaphor for life but a unique, closed, self-referential world, obliquely akin to those severe religions in which the individual is both ‘free’ and ‘determined’—in one sense possessed of a will tantamount to God’s, in another totally helpless.
—Joyce Carol Oates, On Boxing

WHEN A RIGHT fist with the energy of a wrecking ball crunched into his left temple, Tyson Fury’s eyes rolled into his skull and his legs turned jelly. And just before he lost consciousness, Fury felt the ring and the canvas rise to meet the back of his shaven head. But a moment earlier, Fury’s 6-foot 9-inch endomorphic frame—deep-set muscle wrapped under a blanket of loose skin—was up and about at the Staples Center in Los Angeles and, incredibly and improbably, functioning at full potential in the 12th and final round of the WBC heavyweight championship bout.

The 12th—a stage that no one in their right mind expected Fury’s body or mind to last until, least of all his opponent and the reigning WBC champion, Deontay Wilder. Yet, there they were, Wilder and Fury, having gone toe-to-toe to the dregs of the brawl, with Fury’s unpredictable challenges and his remarkable will to survive putting him on the brink of a great upset win; perhaps even a contender for the greatest upset in the history of heavyweight boxing.

Coming in to LA, Wilder hadn’t lost a fight in the 11 years he has been a professional; undefeated in 40 fights, with 39 clean knock-outs. Most of those KOs were achieved with his straight right—Wilder’s favoured and feared finishing punch that has flattened heavyweights in far finer mental and physical health than Fury. So, when he saw his window with only seconds left in the final round, Wilder softened Fury with a left jab, switched off his lights with a ramrod right and helped the swaying giant on his way down with a left hook. And as Fury crashed comatose into the canvas, Wilder ran his thumb across his neck to tell the world that both the challenge and the challenger were as good as corpses.

But how do you kill off a man who has cheated death time and time again? Not too long ago, a severely depressed and suicidal Fury had tried to drink himself to death but wouldn’t die; had tried to drive his Ferrari off a bridge and lived to tell the tale; and had regularly overdosed on a cocktail of drugs and survived. Surely, then, a blow to the temple from the best pound-for-pound heavyweight in the world wasn’t going to be enough to keep him down.

When Fury rose from the dead in LA, defying both belief and the referee’s count, heavyweight boxing came alive in the 21st century. Mike Tyson and Lennox Lewis both competed in this millennium and were far superior boxers to Fury; and the Klitschko brothers better decorated. But none of them made you look deeper than their prizefighting physiques. As Fury wobbled to his feet and pounded away at a bewildered Wilder until the final bell, boxing—as it once was during Muhammad Ali’s time—became more than just a sport.

Not since Ali had this heavyweight division felt as relevant, as relatable. Or even as human. Just like Ali, Fury had it all and lost it all and fought the gravest odds to claw his way back up again. And just like Ali, Fury made you embrace his demons and experience his chequered back story. “If I can do it, anyone can do it, I’m no one special,” he said after the fight. “I changed me life around after sufferin’ from depression— up to the point of suicide—anxiety attacks, everythin’. You couldn’t get any lower than I was. But I am back today, tellin’ me story and inspirin’ millions around the world.”

When Fury rose from the dead in LA, defying both belief and the referee’s count, heavyweight boxing came alive in the 21st century

That story doesn’t begin in 1988, the year he was born three months premature in Manchester, England, and weighed half-a-kilogram. It starts in 2015, when he defeated Wladimir Klitschko to win the unified and lineal heavyweight titles, putting to an end the Ukrainian’s decade-long stay at the summit of pro-boxing. Fury had gone into the fight as a 6:1 underdog and ended up winning just about everything at the end of 12 rounds, by a unanimous decision. Success, Fury says, he expected. The accompanying tribulation, he did not.

“After the Klitschko fight, I didn’t have a purpose anymore. I didn’t want to box anymore because I had achieved everythin’,” Fury told BT Sport before the Wilder fight. “I hated boxin’ at that time, so I wasn’t trainin’ and I had trained all me life from bein’ a young kid. And when you don’t train, you feel depressed.” Fury tried to fill that void with food, alcohol and hard drugs. And when they didn’t work, thoughts of suicide began to surface. He was 27.

“I wanted a date with the Death Man. In me mind nothin’ was worth living for, and everythin’ was pointless. And when nothin’ matters, there’s no point livin’,” he said in the BT Sport interview. “I prayed for death on a daily basis. I’d wake up in the morning thinkin’, ‘why didn’t I die in me sleep, why didn’t I have a heart attack?’ I tried to drink meself to death. That didn’t work; apparently I can take a lot of alcohol.”

It showed. By mid-2017, a 29-year old Fury, who should’ve been in the prime of his physical form, weighed close to 200 kilograms and had been stripped of all his titles. “I was a fat pig at nearly 28 stone, drinkin’ and doin’ drugs on a daily basis, and I really didn’t believe I’ll ever box again.” That realisation, in Fury’s walls-closing-in world, was the equivalent of a distress signal. The call was answered by trainer Ben Davison, who had saddled himself with the unenviable task of bringing Fury back in shape, in the belly and in his head.

There’s a video of Fury—deep into his ketogenic diet by this stage—huffing up a hill in England, yelling, ‘You gatta crack on an’ realise that you did it to yourself and there’s no pity for an idiot.’ Davison’s weight-loss program gave Fury a routine, and with it a purpose to live. But his passion for boxing, Fury would have to rediscover for himself. “Boxin’ is a lonely, hard road. No one can make you fight and dig deep if you don’t want to. You can have the best team in the world but if you don’t want to do sumpthin’, there’s nothin’ anyone can do,” he said.

The road to Staples Center was fraught with perils. But even when he was on the wrong side of obese, Fury understood as soon as he stepped into the ring that his boxing sense hadn’t left him. “I was sparring the top lads in the country at 26-27 stone and doin’ as many rounds as they wanted,” said Fury. “I never lost my boxin’ ability—me movement, me IQ, nothin’. All I had to do was get me head right and body right and take a whole lot of weight off.”

Burning through close to 75 kilograms—and lasting two tune-up fights—in the space of a year wouldn’t be the only miracle in the tale of Fury’s redemption. In championship matches, Wilder usually engages about 40 per cent of his punches. Against Fury, who at nearly seven feet (and clothed in excess skin) should’ve been an easy target, he had landed only 12 per cent after the first three rounds. For, few heavyweights are armed with Fury’s unorthodox methods of evasion—an insane concoction of herky-jerky feints and stealthy sways.

Ever cynical, Fury always caught Wilder loading up his straight right and avoided it; on occasion, even teasing his opponent with his gloves behind his back. And as Wilder’s obsession to find the killer blow began bordering on lunacy, Fury bloodied the American’s left eye in the fifth and further cleaved open the gap in their total points.

Increasingly desperate to close the point-gulf and burdened with a swollen left eye, Wilder came out swinging in the ninth; and half-way in, a stray hook connected and dropped the Brit. But Fury got up, dusted his backside and flicked out a mocking tongue. This enraged the champion, whose swings grew eponymously wilder—now, the crowd at the Staples Center feared, with reason, that the American could well have punched himself out of the contest.

The oldest adage in boxing proposes that all it takes is one hit to end a fight. Wilder had every reason to believe that his rocketing right in the 12th, the one that knocked Fury out cold and senseless, was that hit. But when Fury seemingly resurrected, an American heavyweight champion lost the support of an all-American crowd. Stranger things would happen: when the three judges declared a controversial split-decision—ensuing in a tie and the reigning champion retaining his title—Wilder’s acceptance speech was punctured with thunderous boos.

And, then, it was Fury’s turn with the mic. “How close were you to not getting up in the 12th round?” the ring announcer asked. “Listen, I am a fightin’ man. And Jesus has got his power over me,” Fury said. “I had the holy hands on me tonight and I was brought back and rose me to my feet.” The sport, too, will remember the moment as nothing short of divine intervention.

If a boxing match is a story it is an always wayward story, one in which anything can happen.
—Joyce Carol Oates, On Boxing