You either choose to aid a future where what matters is simply profit, or you choose to create one where everyone profits 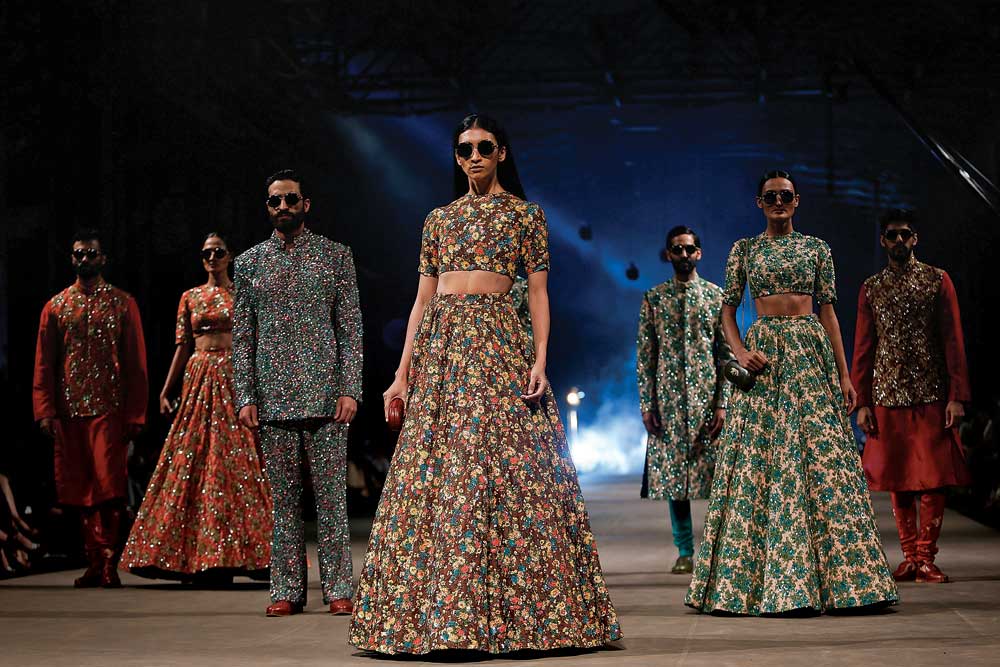 LAST MONTH EcoWatch released an article fiercely titled ‘Fast Fashion is the Second Dirtiest Industry In the World, Next to Big Oil’. Needless to say, it caused a stir. Quoting directly from earth-friendly fashion designer Eileen Fisher’s speech while accepting the 2015 Riverkeeper award for her efforts towards a more sustainable future, the headline may have shocked people, but mainly because reports showed it was most likely true. Though more than 70 per cent of Fisher’s company’s clothing is made from organic and recycled fabrics, the head of the multi-million dollar company stood at the podium and apologetically lamented not being able to do more. She spoke repeatedly of how the fashion industry as a whole needed an upheaval in order to make the kind of impact required to reverse the damage done, and that is being done every day. She called fashion “a nasty business” and she isn’t exactly wrong. Right from the pesticides used to grow a plant, the toxic dyes, chemicals used in production, synthetic fabrics, and of course the fact that with the changing trends each season, we discard more and more, change at this point seems almost impossible.

While this is a bleak scenario globally, for India, now is a decisive time. With the onslaught of the Gaps and Forever21s, a counter movement of some sort is required to restore balance—a balance one is tempted to believe can still be found. Often, people complain about simply not having enough choice, but the most striking thing about the country’s clothing retail space has been exactly that—the vast amount of choice.

Recently we were bombarded by the new Textile Minister Smriti Irani’s #IWearHandloom campaign, kicked off by none other than Prime Minister Modi and promoted by everyone from Milind Soman and Esha Gupta to Sonam Kapoor and Vidya Balan. The campaign turned out to be a roaring success with the otherwise sequined jet-set, and was launched at a time when young affluent India seemed dangerously on the brink of going the opposite way. With H&M, the world’s second largest clothing retailer, opening doors in India last October, it felt like we were headed firmly towards a clothing consumer culture that hadn’t entirely been cemented thus far. (If you wonder who the largest global clothing retailer is, it’s Zara, but H&M is cheaper, a huge factor in India, and hence the sudden concern amongst activists in the country, despite Zara having been present in malls here since 2010.) On their first day alone, H&M’s first store in India recorded Rs 1.75 crore in sales.

Though H&M claims 31 per cent of all the cotton it uses is organic or recycled and that it aims for a full 100 per cent by 2020, what of the fabrics no one likes to talk about? You hear the words ‘silk dress’, ‘linen pants’ or ‘pure cotton shirt’ because it sounds chic and impressive, but what no one likes to say is, “I bought this beautiful dress from a high street brand the other day…was dirt cheap too and made of this lovely polyester. It’s full of chemicals but the good news is, it’ll last longer than cotton, forever even! I probably won’t wear it more than one season because the trends will change, but that’s okay because it was so cheap. Because it’s polyester.”

Polyester as a fabric was created in 1951 not by a weaver or farmer, but by a chemical company. It is essentially plastic, and by 2007 it had overtaken cotton as the world’s most dominant clothing material. While many argue that cotton production is as bad for the earth because it isn’t being recycled properly and requires colossal amounts of water and pesticides while growing, one simply cannot argue with the fact that cotton is biodegradable and polyester isn’t.

Excitingly, the sari, that sometime dark horse of cool, has emerged triumphant. Almost 2,000 years old, it ranks as the longest running versatile player in the fashion game. From blouse-less to Swarovski’d, printed, pre- stitched, pompom pallu’d and over trousers, it is constantly being reimagined. Designer Sabyasachi Mukherjee did what Smriti Irani has, with a lot less brouhaha, back in 2009 when he launched his Save The Saree project which sourced saris from weavers across the country, priced them between Rs 1,800 and Rs 3,500, and placed them in an elegant tin box—‘Sabya ka dabba’, so to speak—to purchase. At the time, he said, “My goal is to make Indians aware of our country’s resources. No machine can replicate what Indian hands can achieve with textiles. The trick is to make consumers take pride in wearing our saris and weaves.”

The good news is consumers are being ‘tricked’ into this ‘new trend’. Designers like Sanjay Garg of Raw Mango fame, Anavila M and store Ekaya are managing to make handloom products sought after fashion items, season after season, and frankly their saris are so beautiful I could weep over them. (Note: no Zara dress has ever caused this sort of emotion within me.) In a directionless world abundantly full of options, the most fabulous art often comes of limitations—to create ‘within’ a context or a subject isn’t a new idea, and the sari is the perfect example of it. You have six yards: now go wild. Similarly, last year for its sixth anniversary issue, Harper’s Bazaar magazine brought together 64 Indian designers and handed them white khadi, asking them to reimagine it. This year, they did the same with ikat (which is currently as ubiquitous globally as chevron print at a white wedding, and is clearly not going anywhere).

Outside of these ‘limitation-set projects’, some designers are using handloom as a standard in their clothing, and not just the ‘whole six yards’ of it. Designer Payal Khandwala’s use of silk, Rina Singh’s earthy dresses for Eka, and even the younger designers like Mogra and The Ikat Story are not simply inspiring, they turn handloom apparel into part of an aspirational lifestyle, which is really the best we can hope for. Besides, it just makes sense: there’s nothing quite like a crisp chanderi on a summer day or a kanjeevaram while eating a galauti kebab on a cold winter evening. The argument that most people (and I), often have about designer handloom stuff is that it is expensive. As is H&M’s eco-friendly Conscious Collection. But maybe it’s time to simply own less too. So instead of seven poly-blend shirts from Zara, maybe you’ll buy two elegant ones from a Rajesh Pratap, because how many does one really need? Maybe #IWearHandloom will trickle down from the Vijender Singhs of the world wearing them, and the girl buying a dress at Zara will find something beautiful at FabIndia. Because, as Sabyasachi put it best, “There is no need for us to move away from our identity.” Ironically, time and again we find, to move forward, when it comes to the environment, we must look back. And in preserving the handloom tradition, we also help preserve the livelihoods of anywhere between 4.3 million and 20 million Indian weavers, many of whom will be the last generation of weavers in their families if they no longer have a clientele to weave for.

If my love of handloom hasn’t emerged yet, let me spell it out. I was always eager to work with textiles, but I was constantly conflicted, keeping in mind the idea of waste and of contributing to a consumer culture that really didn’t require one more thing to buy or sell. When Samriddh Burman of The Burlap People, a brand committed to working with biodegradable handspun fabric, approached me to come on board, though, I couldn’t think of a better way to conjoin creativity and consciousness. At a time when I felt the world needed simpler ideas, working with jute seemed simplest of all.

FOR STARTERS, it turns out jute is the oldest fabric in the world. When I told my sister, who’s an archaeologist, that I was going to do this, she told me how recently on testing preserved imprints on some artefacts, archaeologists found jute existed, even then, in the first civilisation on Earth. It’s also 100 per cent bio-degradable and recyclable. Clearly, since it disappeared back into the earth so neatly, we didn’t even know it existed. A clean crop, it can be burnt without releasing any poisons into the air, and while growing, a single hectare releases more than 10 tonnes of oxygen. Like the coconut, every single aspect of the plant can be utilised, even the leaves, which many people eat. The Burlap People based in Calcutta, began using jute to make bags that “look cool”, as Burman puts it. Jute was not cool, until he got his hands on it. What he makes now has clients from all over the world mailing him for more.

Selling in an unprecedented model, only over Instagram, Samriddh works with his craftsmen in a way that only adds to the goodwill of the project; there’s a connection between the creator and the creation. Head craftsman Nuruddin, for example, has been stitching bags since he was eleven years old; the knowledge he brings with him is priceless, the respect he receives, more than deserving.

All this may seem small, but it’s important. You either choose to aid a future where what matters is simply profit, or you choose to create one where everyone profits. Not just you, or the people who work for you, but the entire chain. So when you walk into a shiny shop inside a mall and buy something, it should help not just your social status or the store or the designer, but the man who stitched it, the one who cut the cloth, the woman who dyed it, the one who wove it into fabric, the one who made a crop into a pulp you could weave, and also the one who sowed and watched and cut that crop. And of course, the land the crop was grown on. That’s why I choose this. That’s why you should.

of some designers are not simply inspiring, they are turning handloom apparel into part of an aspirational lifestyle, which is really the best we can hope for. Besides, it just makes sense: there’s nothing quite like a crisp chanderi dress on a summer day or a kanjeevaram while eating a galauti kebab on a cold winter evening

is consumers are being ‘tricked’ into this ‘new trend’. In a directionless world abundantly full of options, the most fabulous art often comes of limitations. To create ‘within’ a context or a subject isn’t a new idea, and the sari is the perfect example of it. You have six yards: now go wild 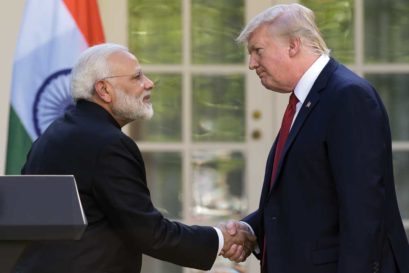 Truth Beyond the Brotherhood

Cosy ties with the US cannot mask our security dilemmas 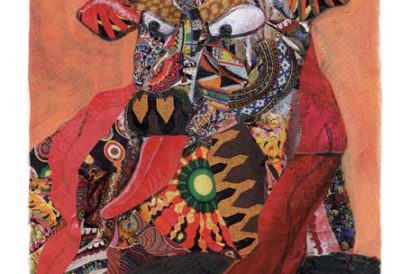 The Sacred Cow: An Epic Stature

Reading the Mahabharata in search of the sacred cow