Are Asia and Africa to carry the white man’s historical burden again? 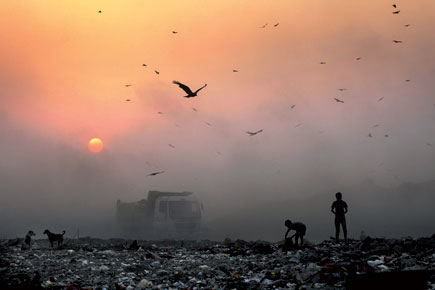 With wealth, though, came an unwelcome guest: global warming. At first, the signs were slight and mostly ignored. As temperatures around the world continued to rise, the West woke up to this new menace: collateral damage from two centuries of breakneck industrialisation.

Raw material from the colonies had been used to feed the booming textile mills of Manchester. Cotton, for example, was exported from India by the British colonial government at artificially lowered prices. The finished cloth produced by Manchester’s mills was sold back to India and other colonies at extortionate prices.

According to ourworldindata.org, the world has emitted over 1.5 trillion tonnes of carbon dioxide (CO2) since 1751. The US is the biggest historical emitter: it has spewed 400 billion tonnes of CO2 into the atmosphere since 1751—more than a quarter of the global total. The 27 nations of the European Union (EU) and Britain come a close second with collective emissions of 353 billion tonnes, comprising 24 per cent of the world’s total.


The US, Britain and the EU are responsible for over half the world’s historical pollution (753 billion tonnes out of 1.5 trillion tonnes of CO2)

The West, having plucked the fruits of industrialisation for over two centuries, now wants under-industrialised India to lead the way by cutting its emissions and slowing its economic growth.

Bjørn Lomborg is president of the Copenhagen Consensus Center. In an op-ed in The Times of India on March 30th, 2021, Lomborg wrote: ‘The rich world has seen incredible development on the back of enormous increases in mostly fossil fuel energy. A couple of hundred years ago, most available power came from backbreaking human work. Even by the end of the 1800s, human labour made up 94 per cent of all industrial work in the US. Today, it constitutes just 8 per cent. If we think of the energy we use in terms of servants, each with the same work power as a human being, every person in the rich world today has access to 150 servants who clean, cook, drive, heat and do almost everything else for them. Even if all OECD nations cut their entire CO2 emissions today, the standard climate UN model shows it’ll reduce warming by 2100 just 0.4°C. Rich countries want the world’s poor to pay the costs through carbon tariffs.

The UK is pushing such tariffs as a key priority of its G7 presidency, and the proposal is falling on sympathetic ears in the US, Europe and Canada. India and its partners need to force sense back into climate policy. If the price of green energy could be innovated below fossil fuels over the next decade, everyone would happily switch.’

According to the International Energy Agency (IEA), the world’s largest polluters today are China which emits 10.07 metric gigatons (GT) of CO2 every year followed by the US (5.41 GT). India is third with emissions of 2.65 GT.

The picture changes rapidly when per capita emissions are calculated. Saudi Arabia is the biggest polluter per capita. Each Saudi emits 18.48 tonnes of CO2 per year. The US is fourth worst with each American emitting 16.56 tonnes of CO2. China is thirteenth on the list (7.05 tonnes) and India, twenty-first (1.96 tonnes).

The West had promised to compensate developing countries to mitigate losses suffered in meeting climate change goals. The target was $100 billion a year. That has never been met. Worse, over half the amount given has been structured as loans—to be returned with interest.

After polluting the world and impoverishing it’s Asian and African colonies while industralising itself, the West is now using climate change to make Asia and Africa once again carry the white man’s historical burden.