An Ashram for the Swami

Vivekananda and the Himalayan connection—Part II 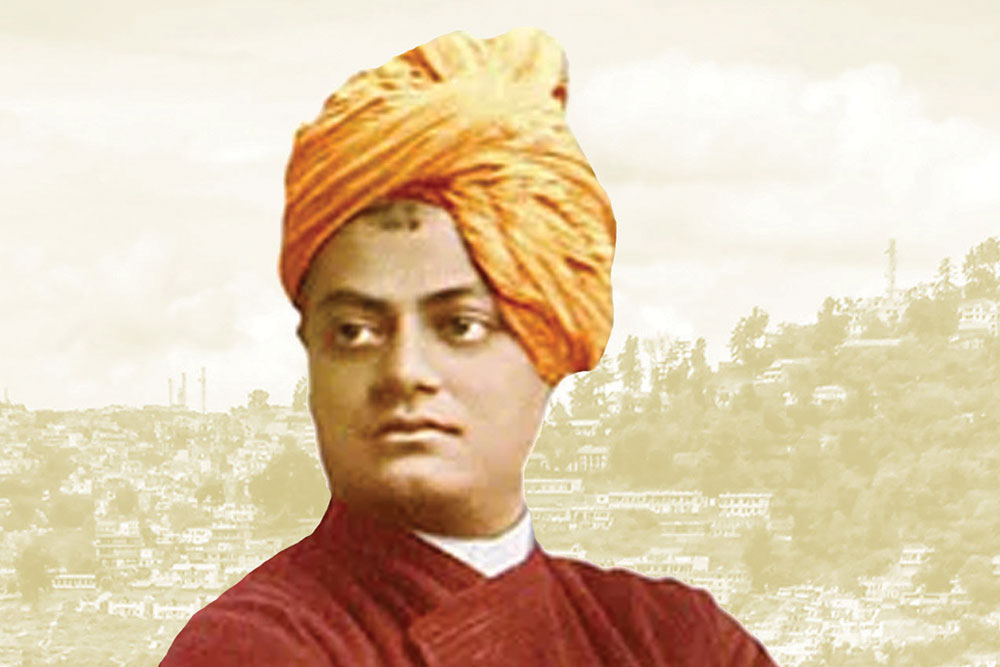 
SWAMI VIVEKANANDA LEFT for Western shores on May 31st, 1893. Setting sail from Bombay (now Mumbai), he travelled through Colombo, Malaya, Hong Kong, Kobe, then overland through Osaka, Kyoto and Tokyo, to Yokohama. There he boarded another ship, reaching Vancouver on July 25th. Finally, he rode a train that brought him to Chicago on July 30th.

After his dazzling debut at the World’s Parliament of Religions on September 11th, 1893, he lectured and travelled throughout the US. He made two excursions to Britain and the Continent in 1895 and 1896. Towards the end of his latter trip, he started his journey back to India. Arriving in Colombo (Sri Lanka), he was greeted by an electric and ecstatic welcome on January 15th, 1897. Vivekananda’s triumphal return to his homeland ended in Calcutta, his birth city, where he founded the Ramakrishna Mission on May 1st, 1897.

Almost immediately after, he repaired to the Himalayas to rest and regain his health. In Almora, he was received and welcomed in a moving Hindi oration offered by the prominent citizens of the region. Comparing him to Sankaracharya, the ‘Welcome Address’ praised his work in spreading the authentic message of Hindu dharma in North America and Europe. Hoping that Vivekananda would establish an ashram in the Himalayas, his admirers added:

“We have heard with great pleasure that you intend establishing a Math [monastery] here, and we sincerely pray that your efforts in this direction be crowned with success. The great Shankaracharya also, after his spiritual conquest, established a Math at Badarikâshrama in the Himalayas for the protection of the ancient religion. Similarly, if your desire is also fulfilled, India will be greatly benefited. By the establishment of the Math, we, Kumaonese, will derive special spiritual advantages, and we shall not see the ancient religion gradually disappearing from our midst… . From time immemorial, this part of the country has been the land of asceticism. The greatest of the Indian sages passed their time in piety and asceticism in this land; but that has become a thing of the past.”

Swamiji responded with equal enthusiasm and praise for his hosts in the hills:

“This is the land of dreams of our forefathers, in which was born Pârvati, the Mother of India… . On the tops of the mountains of this blessed land, in the depths of its caves, on the banks of its rushing torrents, have been thought out the most wonderful thoughts… . This is the land which, since my very childhood, I have been dreaming of passing my life in, and… yet it is the hope of my life to end my days somewhere in this Father of Mountains where Rishis lived, where philosophy was born… the Himalayas always teach us, that one theme which is reverberating in the very atmosphere of the place, the one theme the murmur of which I hear even now in the rushing whirlpools of its rivers—renunciation! sarvaṁvastu bhayānvitaṁbhuvinṛṇāṁ vairāgyamevābhayaṁ —‘Everything in this life is fraught with fear. It is renunciation alone that makes one fearless.’ Yes, this is the land of renunciation.”

Immediately, he launched on his dream project, an ashram in the mountains, specially designed for advanced seekers:

“Friends, you have been very kind to allude to an idea of mine, which is to start a centre in the Himalayas… this is the spot which I want to select as one of the great centres to teach this universal religion. These mountains are associated with the best memories of our race; if these Himalayas are taken away from the history of religious India, there will be very little left behind. Here, therefore, must be one of those centres, not merely of activity, but more of calmness, of meditation, and of peace; and I hope some day to realise it”.

During this time in Almora, we get a glimpse of his daily routine and activities from his letters written during this period. To Doctor Shashi (Bhushan Ghosh) on May 29th, 1897 from Almora, he says:

‘Here I feel that I have no disease whatsoever… I feel very, very strong now. You ought to see me, Doctor, when I sit meditating in front of the beautiful snow-peaks and repeat from the Upanishads: ‘natasyarogonajarānamṛtyuḥ prāptasya yogāgnimayaṁśarīraṁ’—He has neither disease, nor decay, nor death; for, verily, he has obtained a body full of the fire of Yoga”.

Swamiji stayed on in Kumaon for two and a half months, returning to the plains on August 8th, 1897.

It was his English disciples, Captain James Henry Sevier and his wife Charlotte Elizabeth Sevier, who made his dream of creating a Himalayan centre come true. When Advaita Ashrama at Mayavati was actually established, Vivekananda was then on his second trip abroad, from July 1899 to January 1901.


‘These mountains are associated with the best memories of our race; if these Himalayas are taken away from the history of religious India, there will be very little left behind. Here, therefore, must be one of those centres, not merely of activity, but more of calmness, of meditation, and of peace; and I hope some day to realise it’

Sevier had served as a non-commissioned officer in the British Indian army before returning to England. He and his wife met Vivekananda in London in 1895. The following year, they accompanied him on his continental journey in 1896. In July, recuperating in the Swiss Alps, Vivekananda expressed his wish that he wanted to set up a spiritual retreat in the Himalayas.

The Seviers travelled with him back to India on the same ship from Naples. They rented a house near Almora, where Vivekananda came to stay. Later, in 1898, they found a secluded tea estate at a height of 1,940 m, recessed in thicket of deodars, pine and oak, affording spectacular views of the snowy mountains. Nine km from Lohaghat in Champawat district, Uttarakhand, the place was known as Mayavati.

The Seviers, along with Swami Swarupananda, founded the Advaita Ashrama on March 19th, 1899. Swarupananda’s premonastic name was Ajay Hari Bannerjee. Born on July 8th, 1871, he met Vivekananda in April 1897, after the latter’s return to Calcutta. The following year, in March 1898, he was ordained and given his monastic name.

Vivekananda assigned him the task of teaching and mentoring Nivedita. He taught the latter the Bhagavat Gita. Swarupananda also served as the founding President of Advaita Ashrama as well as the editor of Prabuddha Bharata. He died in Nainital on June 27th, 1906.

Vivekananda, who could not be present at the inauguration of Advaita Ashrama, sent a powerful message. He said that the purpose of the Himalayan ashram was to realise the ‘Oneness of all beings’ as a foundational truth. Its ‘particularisation’ being the aim of sadhana or spiritual practice, ‘knowing Him—and therefore the Universe—as our Self, alone extinguishes all fear, brings an end to misery and leads to Infinite Freedom’.

For Vivekananda, Advaita was the only system that gave ‘man complete possession of himself, takes off all dependence and its associated superstitions, thus making us brave to suffer, brave to do, and in the long run attain to Absolute Freedom’. The Swami declared, ‘Dependence is misery. Independence is happiness.’ The purpose of the Himalayan ashrama was to provide a place where these truths could be realised:

‘To give this One Truth a freer and fuller scope in elevating the lives of individuals and leavening the mass of mankind, we start this Advaita Ashrama on the Himalayan heights, the land of its first expiration.

Here it is hoped to keep Advaita free from all superstitions and weakening contaminations. Here will be taught and practised nothing but the Doctrine of Unity, pure and simple; and though in entire sympathy with all other systems, this Ashrama is dedicated to Advaita and Advaita alone’.

The ashram, with its own printing press, library, museum and charitable hospital, has played an important role in spreading Swamiji’s teachings. It was the first to publish his complete works. It also houses a museum with objects of Vivekananda’s personal use.

Pathographies of the Extreme

The Chill of Shimla