A Letter from Dhaka

Books, biryani and other delights of a charming city 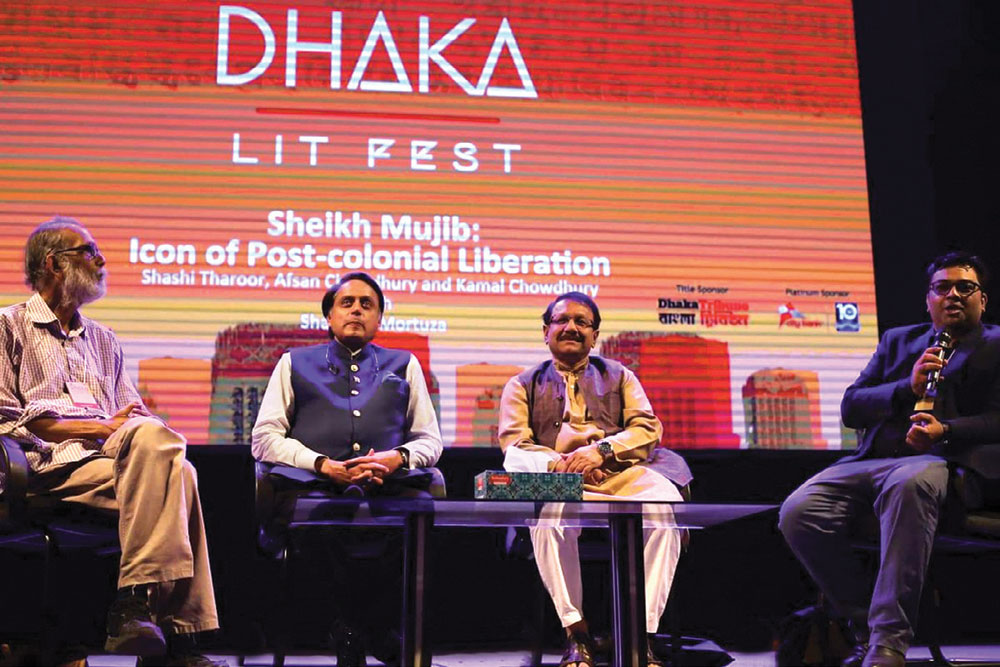 I FIRST HEARD OF Bangladesh in 1971, not just because of George Harrison, but because my mother made me donate a portion of my meagre pocket money for cyclone relief. What goes around comes around and this year I went to Bangladesh for my first brief visit, as a speaker at the Dhaka Literature Festival, and was amply rewarded for my tiny sacrifice many years ago.

I had little idea what Dhaka would be like. It features rarely, if at all, in Hindi cinema—unlike Pakistan—even though many of those who shaped the industry were from what was East Bengal: Bimal Roy, Anil Biswas, Geeta Dutt, Suchitra Sen, Mithun Chakraborty, SD Burman and others. Bengali cinema comes much closer, with the great Ritwik Ghatak himself from what is now Bangladesh, being one of the few to discuss Partition and the subsequent mass migrations in both directions.

I have seen very few Bangladeshi films, as, although Bangladesh promotes its Bengali film industry, few have travelled overseas. The films of the late Tareque Masud reached a wider audience but I hope scholarly attention recently by Lotte Hoek and Zakir Hossain Raju will help to open the field. There is a huge Bangladeshi audience for Hindi cinema despite it being banned for most of the nation’s history to promote the local industry.

I recently saw the extraordinary 1959 film Jago Hua Savera directed by AJ Kardar. Filmed near Dhaka, then in East Pakistan, it is set in a village of fishermen who struggle for their day-to-day existence. A masterpiece of neorealism, it was beautifully shot by cameraman Walter Lassally, who was part of the British New Wave and whose films included The Loneliness of the Long Distance Runner (directed by Tony Richardson, 1962) and who won the Oscar for Zorba the Greek (Michael Cacoyannis, 1964). The film was based on a novel written by Manik Bandopadhyay and starred Tripti Mitra, a veteran of the Indian People’s Theatre Association, but the film is in Urdu, its screenplay written by Faiz Ahmad Faiz, making it as strange as if it were shot in English. Jago Hua Savera was banned in Pakistan but recently restored and screened in London.

These images had no resonance with the smoggy, high-rise city I encountered, garnished with near-stationary traffic. Dhaka had been a Mughal capital in the 17th century, with migrants from across Europe and Asia seeking to trade in its commodities, including its famous muslin. Traces of this period remain in an incomplete and rather shabby Mughal fort, now overlooked by modern buildings and a Christian cemetery that reveals the large number of migrants, among them many Armenians who lived in Dhaka’s moment of glory before the capital shifted to Murshidabad, then later to Calcutta. Connections between the colonial capitals continued. Visits by Rabindranath Tagore, the composer of the Bangladeshi and Indian national anthems, were commemorated; we were told he had composed Gitanjali in a house overlooking the Baldha Garden in Dhaka.

Although Dhaka saw migrations during and after Partition, the Hindu population is still much in evidence. The Dhakeshwari temple was named the national temple after the destruction of the Ramna Kali Mandir by the Pakistan army during the 1971 National Liberation War, this temple also being heavily damaged. A shakti peeth, where the jewel of Sati’s crown fell, links the temple to others in eastern India, such as the Kamakhya in Guwahati. However, the temple feels more like other early 19th century Bengali temples rather than an ancient one. Hindus leaving the city took the original form of Durga as Dhakeshwari, which is now in Kolkata, and a replica resides in this temple. It was hard not to think one was in Kolkata, given the gentle relaxed atmosphere of Bengali women in saris and bindis moving about, although we were clearly too early, weather-wise, for the famous monkey cap.

Ghosts of Dhaka’s former glory live on in place names, including Pilkhana district, where the 2009 Bangladesh Rifles revolt took place. Alas, no elephants wander either the district or the Old Elephant Road, presumably the former Elephant Road rather than the road of an old elephant.

I was sorry to miss the tour of Louis Kahn’s Jatiyo Shangsad Bhaban (the national parliament house), a vast complex of the parliament buildings including MPs’ homes, gardens and an artificial lake. This modern wonder is the location of a major section in the extraordinary novel, Babu Bangladesh!, by Numair Atif Choudhury, where it is a modern link to a non-modern world, one where light plays tricks and wild stories circulate. Alas, this remarkable novel is unlikely to reach the audience it deserves, given the author’s untimely death in an accident in Kyoto, yet it remains an evocative work for which this reader at least definitely needs an annotated edition.

The festival itself was very much part of the Dhaka scene, showing the love of the Bangladeshi people for literature and culture. Organised by Ahsan Akbar, Sadaf Saaz and Kazi Anis Ahmed, the Bangla Academy was packed for three days, even when heavy rain turned it into a mud patch for the finale. The big stars, William Dalrymple and Shashi Tharoor, pulled in the crowds as usual and there was great interest in talks by novelists, including HM Naqvi from Pakistan and Prayaag Akbar from India. All the talks were lively and well-attended and the audience asked questions which showed a serious engagement with the topics under discussion. I met a former SOAS PhD student who now teaches at Jadavpur and an academic I hadn’t seen for at least 30 years as well as received random hugs from audience members, welcoming their visitors with big smiles.

The crowd was extraordinary. Hardly any women were in Western dresses, opting instead to wear a range of extraordinary saris, tied in a variety of ways, but each stylish and fashionable. They were worn over the head in the manner of the fashionable ‘khaleeji’ or camel-hump hijabs that look as though there’s a massive beehive underneath, worn over a long-sleeved blouse, covering every inch of flesh but draped and pleated to perfection in a rainbow of colours. There were many other draped scarves, black veils, dupattas and saris, all carefully worn by extremely stylish women. Yet it wasn’t just a fashion show, as participants, including many teenagers and kids, were buying books, attending signings and taking selfies with the authors when not actually attending talks.

I enjoyed the stalls which offered chai, enamel work on tin similar to rickshaw art, tea from Teatulia and the wonderful prints of Dhakayeah!, where I learnt about the fox whose wedding is on a day when the sun shines as it’s raining. I bought a print of hilsa and rice for a friend in Kolkata (for which I must insert a borrowed joke: ‘The hills are alive with the sound of music’) and lovely stationery. We went shopping with an old friend from Delhi and bought beautiful Dhakai saris, though the jamdaanis at nearly Rs 2 lakh were beyond our budgets. Next time.

Tishani Doshi danced; Zohab Zee Khan rapped and performed on stage but I particularly enjoyed his impromptu performance with local schoolchildren who were making TikTok rap videos in the Mughal fort. There was more jamming at the parties, with the Australian Zohab playing the didgeridoo, Q from Kolkata on drums and local musicians on guitars.

And we ate. Food that was similiar to that of West Bengal, but my husband swears the kacchi biryani surpasses all others, a model of subtle, complex flavours and textures, of meat, rice and big pieces of potato.
Cyclone Bulbul approached on our last night and as the Kolkata airport closed, we were ambivalent about returning home and instead lingering on longer in Dhaka. Ultimately the winds changed direction after ravaging the coast, so we got away.

I gave one of the votes of thanks, unleashing some Bengali on the unsuspecting audience: “Amar Dhaka eshe khub bhalo laglo. Abar ashbo ebong aar ekta jamdaani sari kinbo” (I am very happy that I visited Dhaka. I will return and buy another jamdaani sari). I really meant it and am saving hard for the next visit.