X: Past is Present 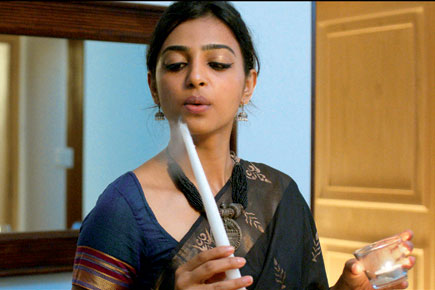 This movie takes the notion of the director as an auteur and turns it on its head. There is literally a football team making this film, with eleven directors—each directing one section of a single narrative. Experiments are welcome, but this idea is bizarre. It implies that the producers believe that 11 different people can contribute to a single story of a middle-aged man who meets a woman who reminds him of all the previous women in his life.

This ageing hipster is played by Rajat Kapoor (excellent casting) and he is supposedly a well known filmmaker called K. He meets a pretty young thing at a film festival and the memories come flooding back. His younger self, K junior (Anshuman Jha), is well cast too as a callow youth obsessed with women of all social classes, irrespective of their relationship or marital status. Each encounter, from the unrequited affair of his school days to his present day flirtation, is filmed in a separate and distinct style.

It just does not work—for the simple reason that the perspective on women keeps changing. For example, one of the more interesting sequences has K’s wife (Radhika Apte) looking at things from her point of view. She tells him that she knows he is having an affair. He denies it. She ignores his denial and proceeds to issue a simple statement. She has got rid of it. Of what? His baby.

A film with a single director might have developed this conversation into an absorbing narrative. But in this film, it only serves to remind K of other ‘awkward’ situations with women in his past.

Some of the conversations with women are blatantly sexual and entirely unconnected with each other. They get a few laughs for their out-of-the-box nature, true, but they are too casual and desultory to hold together as a single movie.

Overall, this film is an experiment we can well do without.