If you loved playing games at video arcades, this film is for you 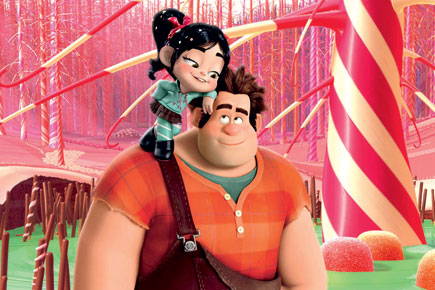 If you loved playing games at video arcades, this film is for you


Disney animation has traditionally been about entering an alternate universe. Earlier, it was the generalised world of fairy tales and animals with which identification was fairly easy. With Wreck-it Ralph, it is much more specialised, and unless you were into the games of video arcades that have been popular since the 1980s, the entertainment could be lost on you.

Certainly, it takes a while to battle the cinematic claustrophobia of being stuck in the off-duty hours of an arcade, when the machines are not in use and when the players of various games take a much-needed break. They are free to mingle now and there is plenty of inter-game socialisation. When the cats are away, the mice are at play.

Ralph is the villain of his game, Fix-It Felix Jr., and is suffering from an existential crisis. He is tired of being the guy who wrecks everything and would like to be a hero for a change. In his game, he is a destructive giant, and it is the little guy, Felix, who fixes everything. But one day, during a chat with a soldier from a ‘First-Person Shooter’ game, Hero’s Duty, he is told that in his game, the winner gets a medal.

Realising that he is condemned to eternal villainy if he remains where he is, he decides to game hop and go where he is better appreciated. When the arcade opens the next morning, Ralph is missing, the game declared to be malfunctioning, and all the characters, including the hero, Felix, unemployed and homeless.

The makers of this animated movie game are well acquainted with the addiction of the arcade and they give the viewer no chance to detox. For 108 minutes, you tour the games, and since the 3D movie screen has no peripheral vision, unlike an arcade where you can take your eyes off the monitor and look around, you are stuck. If you like that, great. If you do not, you go bananas.