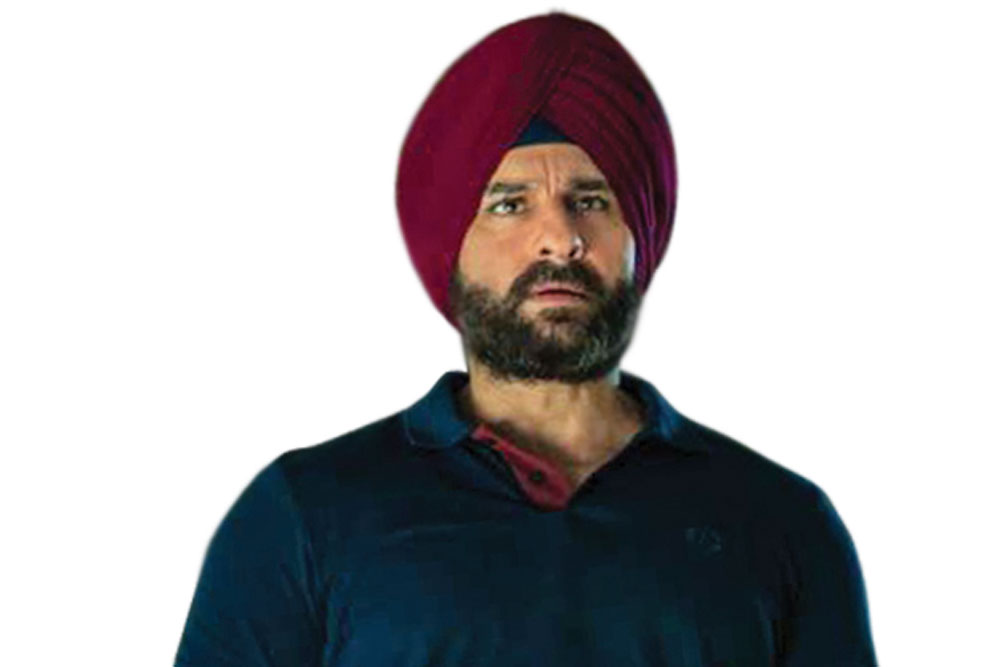 Saif Ali Khan may not be on social media, but he knows of practically every word that’s been written about his performance in Sacred Games. The best thing is that he has a sense of humour about it. He acknowledges repeated comments from fans about the size of Sartaj Singh’s butt, and chuckles while admitting that it does look “unusually large” on the show.

Saif is also full of praise for reviewers who’ve spotted the ‘layers’ in the show, but doesn’t agree with the occasional carping that the Sartaj Singh track is less gripping that the Ganesh Gaitonde narrative, and that Nawazuddin Siddiqui pretty much chews up the scenery. “That’s unfair. Nawaz is great, but the show can’t only be about Ganesh Gaitonde or it would be very boring. I think we complement each other very well, and the show works because we’re both quite good in it,” he says.

Although he had only a day’s shoot with Nawaz, during which they barely spoke (“He was buried under prosthetics which made it hard for him to talk, but we did exchange friendly grunts”), Saif says watching the Gangs of Wasseypur star’s performance gave him gooseflesh. He is also full of admiration for Radhika Apte who plays RAW agent Anjali Mathur, Jitendra Joshi who plays Katekar, and Neeraj Kabi who plays his boss Parulkar. “These guys are at the top of their game and they bring something that is fresh and natural and so different from what we were used to seeing in Bollywood.”

Saif says the praise he’s received for Sartaj Singh is overwhelming. “I think I’ll keep my Padma Shri now,” he jokes, referring to all the complaints over the years that he was unworthy of the honour.

Abhishek Bachchan will have you know that you can’t get away with making up stories about his wife and child. The actor politely—but firmly—called out a website for reading too much into a video of his family earlier this week.

Seen walking out of the arrival gate at the airport on their return from London, the video was interpreted by some troublemaker hack to suggest Aishwarya wouldn’t let Abhishek hold their daughter Aaradhya’s hand. Not one to take it lying down, Abhishek put out a tweet asking the website to refrain from running ‘fake news’.

He wrote: ‘With due respect. Please refrain from making up false stories. I understand the need to continuously post, but would really appreciate it if you could do so responsibly and without mischievous intent. Thank you.’

The story was promptly pulled down by the website. Abhishek 1. Troublemakers 0.

As it turns out, the answer to the niggling question, ‘Are they dating?’ is ‘yes’. For some weeks now, there have been whispers, not to mention open speculation in Mumbai tabloids, about whether the two are romantically involved. Recently launched together in a Hindi movie, the couple have revealed terrific chemistry off screen.

Insiders at the studio that has produced the film say the pair—who started out as strangers, then became friends—‘got close’ during the film’s making ‘as most newcomers do’. One source points out that the experience of making one’s first film is so unique and challenging that two people going though it at the same time inevitably find themselves drawn together.

The source adds that the two may be infatuated with each other for the moment, but like another pair launched by the same studio some years ago, they are likely to drift apart as they move on to other projects. Apparently, the young actors in question have made no promises of undying, lifelong companionship. “They’re mature and intelligent and they understand that they have long lives and careers ahead, and that nothing is permanent,” says the source.