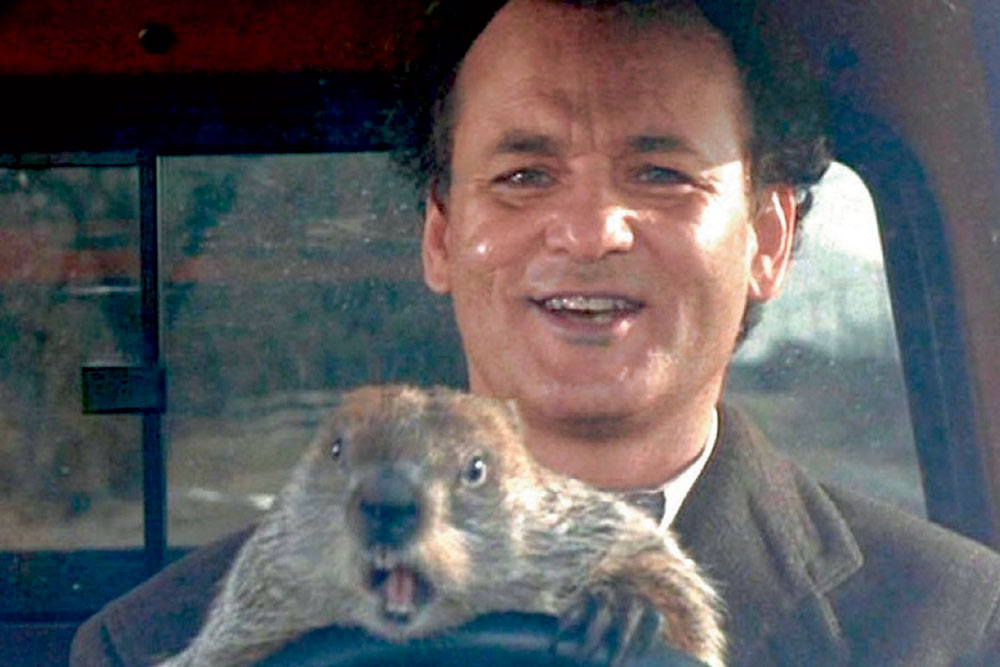 Bill Murray in a scene from Groundhog Day


THREE MEN ARE drinking at a bowling alley. One is dressed in a suit. The other two look similar as both wear checked flannel shirts, one sports a cap and the other smokes a cigarette. The suit guy stares straight ahead and recounts how he was in the Virgin Islands once. There he met a girl. They ate lobster, drank piña coladas. At ‘sunset we made love like sea otters’. When he says this the other two men elbow each other and chuckle. The man in the suit continues, ‘That was a pretty good day. Why couldn’t I get that day over and over and over again?’ One of the listeners interjects with a platitude about how the speaker seems a half-empty-glass kinda guy. The speaker continues, ‘What would you do, if you were stuck in one place? And every day was exactly the same? And nothing that you did mattered.’ As the guy smoking the cigarette downs another shot, the guy in the cap slumps onto the table and says with despair, ‘That sums it up for me.’

This one-minute scene from the 1993 American film Groundhog Day sums up what countless people are experiencing at the moment. Like the man in the suit, played by a Bill Murray with hair, we all now know what it’s like to be stuck in one place and with every day playing out the same. And these days have no highlights like watching sunsets at the beach, instead they melt into a series of sameness. They’ve none of the distinctions of holidays. Nothing remarkable or exciting happens; no meeting of strangers, no cocktail drinking, no exotic food eating.

Groundhog Day, the ’90s cult film tells the story of television weatherman Phil Connors (Bill Murray) stuck in an endless loop of February Seconds. Every morning he wakes up to the song ‘I Got You Babe’, and every morning it is still February 2nd. In Canada and the US, February 2nd is observed as Groundhog Day. The superstition goes that if a groundhog emerges on this day, and sees its shadow, if the sun is out, it will return to its den, and winter will prevail for another six weeks. If it does not see its shadow because of an overcast sky, spring will arrive early. The hope, of course, is that the groundhog will signal the end of winter, that the snow will melt soon and that summer lurks around the corner.

I can’t think of another movie which so powerfully captures being stuck in a loop of time. What if nothing one did mattered, and every day stayed the same. April 2021 in too many ways echoes April 2020. The same sense of doom and gloom envelop us, but this time it seems even more heightened. Many sensations cloak us, but the one I hear most often is déjà vu. The word for April 2021 must be ‘déjà vu’.

In the original screenplay of Groundhog Day Phil asks his love interest Rita (Andie MacDowell), ‘Have you ever felt like you were reliving the same day over and over again?’ She asks, ‘Like déjà vu?’ He replies, ‘More like—déjà, déjà, déjà, déjà… ’


The 1993 American film Groundhog Day reflects what countless people are experiencing at the moment. Like Bill Murray, we all now know what it’s like to be stuck in one place and with every day playing out the same

One sees a photograph of migrants at Anand Vihar Bus Terminal in Delhi. Every foot of space is occupied by men and women carrying bags and backpacks. If not for the timestamp, one could easily mistake this for a photograph from March 2020. A headline in a business paper reads, ‘Deja vu: Fear of labour migration haunts companies again’. One wonders, who is more haunted here? The same men and women who embarked upon journeys back home on foot last year? Or companies which fear that their work will come to a halt? Perhaps both look at the future with equal uncertainty.

Déjà vu is defined as ‘the strange feeling that in some way you have already experienced what is happening now’. This time it wasn’t the suspicion that one has seen this before. Rather it is the certainty. Newspapers run photographs of ambulances with patients gasping for breath and waiting for admission into hospitals. One wonders if one has seen such photos before. Perhaps not. But who is to tell, who is to remember? In an endless stream of bad news, repetition seems the norm rather than the exception.

Déjà vu, the sensation, remains a mystery, as it is hard to define and nearly impossible to replicate in lab-like scenarios. But scientists now suspect that déjà vu is a ‘memory phenomenon’. The general theory is, ‘We encounter a situation that is similar to an actual memory but we can’t fully recall that memory. So our brain recognizes the similarities between our current experience and one in the past. We’re left with a feeling of familiarity that we can’t quite place.’

There are two types of déjà vu. One is more severe and associated with epilepsy, which could cause hallucinations, and may indicate neurological or psychiatric illness. The other is the non-pathological type, which 70 per cent of the healthy population has experienced.

It is interesting to note that déjà vu is said to be most common in the 15-25 age group. The Curiosity Daily podcast (September 2020) throws light on why this might happen even though it goes against the logic that older people have more memories which could shortcircuit. Scientists now speculate that déjà vu might actually be the ‘sign of a healthy mind, and not an unhealthy mind’. It is likely that older brains lose the recognition that this ‘memory’ cannot be for real. Older people might have as much déjà vu as younger people, but they lose the ability to tell the difference between a real memory and a mind glitch.

While re-watching Groundhog Day, this fact comes back to me. Phil asks an elderly hostess, ‘Do you have déjà vu, Mrs Lancaster?’ To which she replies earnestly, ‘I don’t think so, but I can check with the kitchen.’ ‘Déjà vu’ was first coined by the French psychic Émile Boirac (1851-1917) and first used in 1903. It has become culturally more popular only in recent decades and that could also be a reason why younger people believe they experience it more often.

The naming of emotions is often the best way to deal with them. The pandemic is an unfamiliar event in all our lives. Last year, when the pandemic had just set in upon us, the term used to describe our ‘collective discomfort’ was ‘grief’. A year later, after we have enjoyed a few months of ‘normalcy’ in India in early 2021 we are back to feeling what we did when the pandemic first rode in.

A 2013 novel that plays with the idea of déjà vu is Kate Atkinson’s Life After Life. It tells the story of Ursula Todd, a character who dies at the end of most chapters and then comes back to life. In the novel, set in the period between 1910 and 1950, each chapter goes further into Ursula’s life. It is a novel that establishes the power of the author: she can do what she wants, she can kill characters, she can bring them back to life. The baby Ursula is choked by her own umbilical cord. The baby girl returns. As a sort of hat tip to the ploy used in the novel, 13-year-old Ursula’s aunt asks her if she is learning French in school. Aunt Izzie then says, ‘I bet the first French words you learned were déjà vu. Poor old thing. Maybe you were dropped on your head as a baby. I expect I was.’

With every ‘rebirth’ of Ursula’s, she will succeed at doing something else. Phil from Groundhog Day realises that he can do just about anything as his actions have no repercussions. He can stand in the way of a truck, drop a plugged in toaster into his bath, but he will still wake up at 6 the next morning to the song ‘I Got You Babe’. His story is essentially about a man stuck in a cycle of time and who is unable to escape no matter what. When Rita asks him at a dance, ‘What did you do today?’ He replies, ‘Oh, same old, same old.’

Groundhog Day is the perfect reminder that the eerie feeling many of us are experiencing as the second wave comes crashing down on is ‘déjà vu’.

Jhumpa Lahiri: The Author of Anywhere