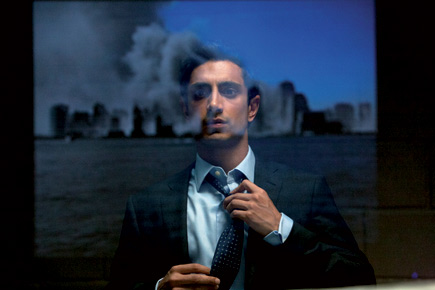 
The plot of this film is a fabrication—an implausible manipulation of time and space—but the voice comes through intact. By constructing her narrative around a conversation between two men in a cafe in Lahore, Mira Nair makes a valiant attempt to turn a monologue into a dialogue. It doesn’t quite work, but The Reluctant Fundamentalist still ends up a riveting movie.

The writing holds you from first to last. Since both novelist Mohsin Hamid and filmmaker Mira Nair work in the warp-and-weft of two or more cultures, they find self expression in the rips and gaps that appear from time to time between the separate identities they must sustain. This is translated very well to film, and the speaking of Urdu and English, the seamless switch in the languages, conveys a curious interaction between thinking, culture and identity.

At one point, the storyteller, Changez Khan (Riz Ahmed), explains his feelings in Urdu to Erica (Kate Hudson), his American lover in New York. He tells her that love is sometimes ‘ishq’, sometimes ‘pyaar’ and sometimes ‘mohabbat’. She repeats the words in perfect pronunciation, but is unable to erase the memory of her deceased boyfriend, so Changez can never tell which word expresses her love.

Later, in Istanbul, he meets a Turkish publisher (Haluk Bilginer), whose business is struggling. The American company Changez works for is going to take it over. The meeting is an epiphany, and in this city that straddles East and West, at lunch with a failed publisher of literature, the son of a famous poet from Punjab decides to go home.

It is in these poignant moments that the movie is absorbing. The form of the ‘dramatic monologue’ belongs to poetry, not prose. It is an expression of poetic and cultural experience that Nair, with a little help from Faiz Ahmed Faiz, weaves effectively into film. An engrossing cinematic experience.