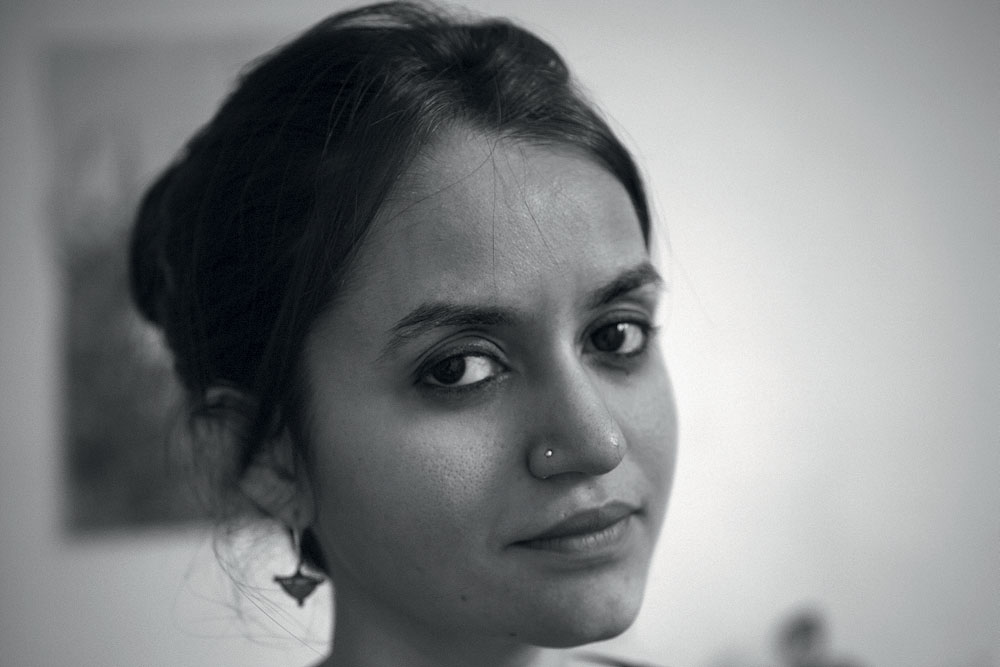 
PAYAL KAPADIA HAD no expectations, least of it all winning an award, when she brought her film A Night of Knowing Nothing, to be screened at the prestigious Director’s Fortnight section at Cannes that runs parallel to the original film festival. Yet, for someone who landed in France with a film that she put finishing touches to during her quarantine period after her arrival, Kapadia has impressed the press, the audience, and the festival jury.

“We literally brought the DCP [Digital Cinema Package] like in our hands and gave it to them, so it was a bit overwhelming and exhausting at the same time,” Kapadia says. “We only had a rough cut and had done no work on sound, it was really all over the place,” she adds recalling her submission, on the terrace of the festival venue at the French Riviera, only a few hours after the premiere screening, alongside her partner Ranabir Das whom she says is an integral part of her process as a cinematographer and editor.

Kapadia would go on to win the L’OEil d’or award for her film, on July 17th, at the 74th Cannes Film Festival. It’s an award given to a feature length work, regardless of its category—fiction or non-fiction, by the French organisation, SCAM—Société Civile des Auteurs Multimédia, and includes a prize money of 5000 euros, roughly Rs 4 lakhs.

Kapadia’s film unspools as an ode to life on campus, starting out tenderly with silent shots of college parties and even a wedding, an interplay between fiction and documentary, sound and visuals. But there’s trouble brewing in the background in the form of student protests that rock the nation, stressing the importance of public-funded education as well as the repeal of the Citizen Amendment Act. A substantial portion is also dedicated to the management change at FTII (Film and Television Institute of India)— from where Kapadia graduated—that galvanised into prolonged yearlong protests. In 2015, she even faced disciplinary action at FTII for her role in the protests..

Set as a series of love letters written by a student named L, rendered in the background by the melancholic voice of Bhumisuta Das, its grainy textural images effortlessly switch from monochrome to colour based on the film’s overall mood, the whole project a nod to Avant-Garde filmmaking, something Kapadia has long set her eyes on. L is the central voice of the film who guides the viewer through these notes written to her lover, an effective narrative device capturing how things are falling apart around her.

Since Kapadia’s film follows an unconventional path that borrows heavily from both fictional and non-fictional elements, it fits the bill for the Director’s Fortnight’s whose motto is to, “highlight the most singular and visionary practices in contemporary cinema.” The premiere screening of the film witnessed a packed hall and enraptured audiences applauded and stayed on for a Q&A. “…the first film by Indian director Payal Kapadia lights up the screen of the Director’s Fortnight section,” wrote the French publication Liberation. Yet, Kapadia understands the limitations of her film. “It’s definitely not for everyone,” she says.

Kapadia and her friends shot and recorded their lives on campus for years, including some who took their cameras to the student protests. What they amassed became the backbone for A Night of Knowing Nothing that she says soon started to look like a found-footage film. For additional footage, she had help from the digital archive Pad.ma—Public Access Digital Media Archive, an ever-growing archive for filmmakers, where anyone with a 16mm footage can upload their work for use by artists.


“We began putting random things together to try to find some meaning out of it. If you juxtapose multiple things, some meaning is always made. So, it was truly experimental and cathartic,” says Payal Kapadia, filmmaker

Then the process became finding a narrative buried within these hours of visuals. “We began putting random things together to try to find some meaning out of it. If you juxtapose multiple things, some meaning is always made. So, it was truly experimental and cathartic,” she explains.

Cathartic, because her close friends participated in the making of the film by contributing their own visuals, and the end product, Kapadia feels is a collective accomplishment.

The protests are shot at close range with handheld cameras, the effect sometimes shocking, when the visuals of police brutality unleashed on the students fill the screen—especially, the now infamous library assault on unsuspecting students by police in riot-gear. To contrast this, Kapadia switches back to campus life that punctuates the narrative with students lounging in their rooms on dreamy light filled afternoons and birthday celebrations. Tying it all up together nicely is L’s voice in the form of letters to her now-absent lover.

Kapadia uses extensive textual placeholders in calligraphical black and white, sometimes peppering the film with hand-drawn images to fill in the narrative gaps and interlink multiple themes. “We are going through so many years, so this was a quick way to do ellipses. We weren’t completely convinced by it, but we decided to do it, anyway,” she clarifies before Das interjects with: “I think it contextualises the narrative element.” 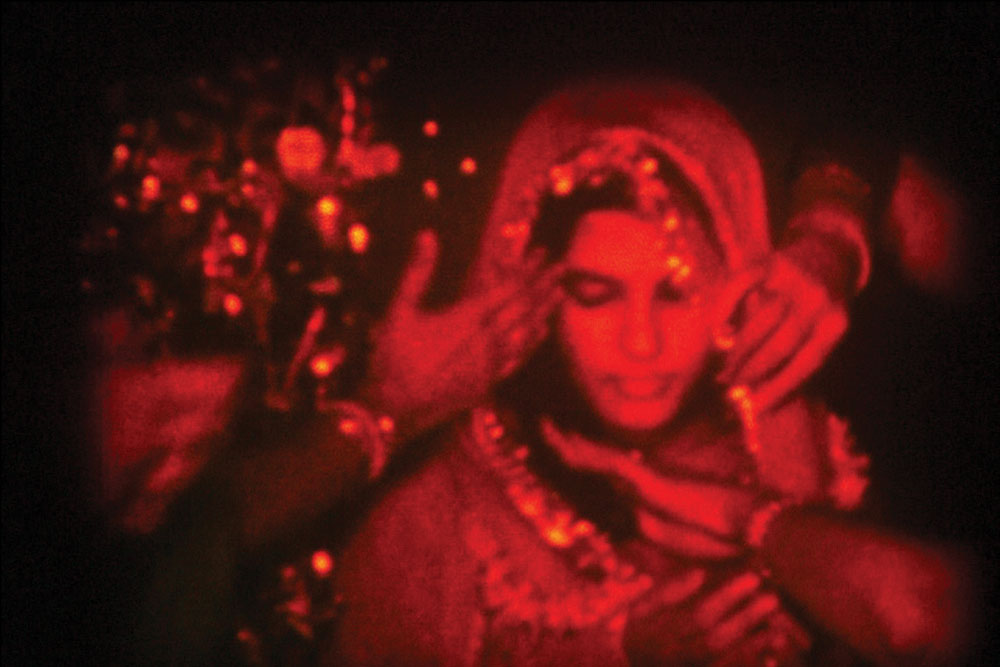 THE ROMANCE IN the film is borrowed from the lives of her friends. “It seemed interesting to record everyday lives, so we started recording our own friends and our life in FTII. Everybody was going through some trouble with love, because of caste, religion, arranged marriage etcetera, so we were shooting all that because I was always interested in romance. Then suddenly, when the other footages came in, the film became something else. But initially it began as a thing to talk about love in India, but the film took off in a different direction.”

Kapadia claims this hybrid narrative is a result of her fascination with found-footage format that blurs the boundaries between fiction and non-fiction. She counts among her inspiration the French documentarian Chris Marker, Thai experimental filmmaker Apichatpong Weerasethakul (whose feature Memoria was screened at Cannes this year and won the Jury Prize), Portuguese director Miguel Gomes and Israeli visual artist Omer Fast.

A Night of Knowing Nothing unspools as an ode to life on campus, starting out tenderly with silent shots of college parties and even a wedding, an interplay between fiction and documentary, sound and visuals

She says these directors investigate non-fiction through a fictional lens, just as the late Belgian auteur Chantal Akerman did with her autofiction films. What Akerman says about her own working style seems to echo Kapadia’s work; “I’d like to film […], in my own style of documentary bordering on fiction. I’d like to shoot everything. Everything that moves me.”

Another motive to choose this format is practical because funding for the kind of films Kapadia aspires to make is hard to come by. “It’s very expensive to make films, in the past few years applying for funds and waiting, I’ve realised that if you have to make films you have to do it in whatever way you can. Fortunately, I have a cameraman who is also my partner, so both of us are always trying to see how we can manage with existing resources because it’s hard to get funding for someone like me.”

Kapadia has received numerous European funds and accolades across international film festivals for her short films, And What Is the Summer Saying (2018), Afternoon Clouds (2017) and The Last Mango Before the Monsoon (2015). Funding for A Night of Knowing Nothing came from diverse sources, like Sundance.

She is impressed by the French dedication to support arthouse films. “In France there’s a strong cultural inclination to support and fund films. Sometimes you can go to your neighbourhood cinema and watch avant-garde films. Last year I was at this theatre run by squatters. The city was going to demolish this old theatre, but a bunch of cinephiles got together and squatted there and started screening films,” she recounts.

Speaking about India, Kapadia laments the decline of government funding through NFDC that produced accomplished auteurs of parallel cinema like Mani Kaul and Kumar Shahani. She admits the current discourse about cutting funds for public education system in India is a cause of concern for her. This is also the reason she narrowed the focus of protests in A Night of Knowing Nothing because it is a personally important one.

“We wanted to talk about the public education system because I have benefited from it. I have been able to make films and travel to festivals like these because I have had a public-funded education. There are people from backgrounds who would not be able to afford even these subsidised fees. Because of public funded FTII and reservation, art schools and film schools have been able to survive,” she adds.

Her next fiction feature, titled All We Imagine as Light revolves around the lives of two migrant Malayali nurses in Mumbai. Having decided to stay in France for a while to try and finish the writing of the film, she adds, “I think, I’m only going to find funding for my kind of films in Europe.”

Kapadia’s winning of the L’Œil d’or award will solidify her aspirations in experimental, arthouse filmmaking. She is now in Marseilles to show A Night of Knowing Nothing at an indie film festival, FIDMarseille. Speaking from Marseilles, she says, she has hardly had time to process this success. “I appreciate the jury in seeing the possibility in this film and going beyond its traditional norms and choosing this hybrid non-fiction work.”