In the web series based on Prayaag Akbar’s novel, the future is almost here 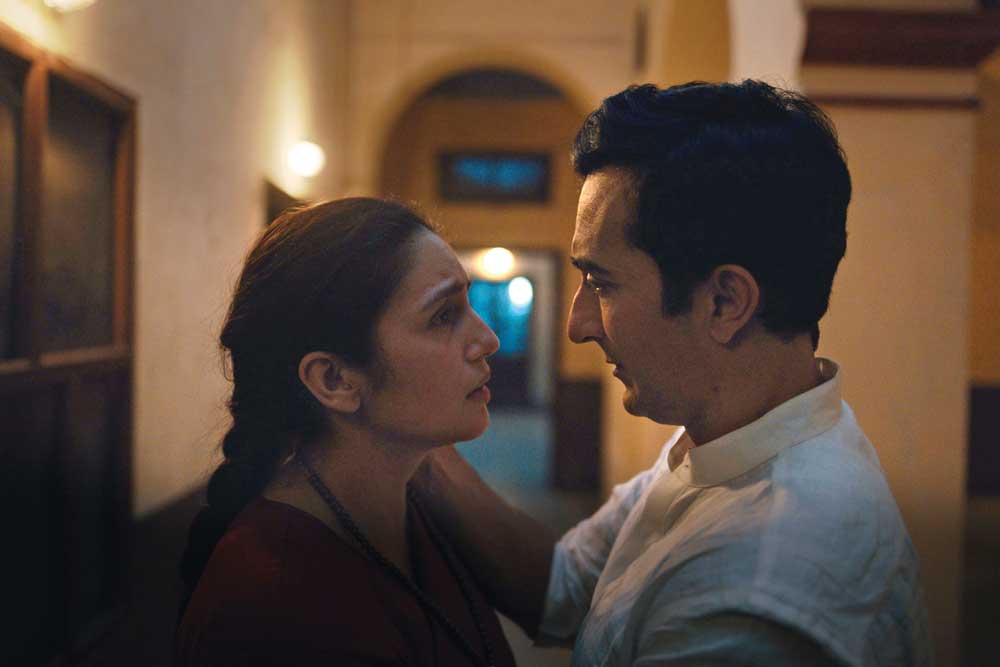 “WE ARE ALL Shalini now,” says Deepa Mehta, living in our purified air bubbles with our Evians and Vogmasks. She’s referring to the lead character of the new Netflix series Leila of which she is creative executive producer. In the web series based on Prayaag Akbar’s dystopian novel, the future is almost here—water ATMs, water riots, mountains of garbage, sulphur fumes, high walls keeping out the unwashed and clearly defined sectors in which purity of communities is maintained. In the midst of this is Shalini, once a privileged upper- middle-class woman who could afford the freedom to marry outside her religion and live in the East End in the company of fellow professionals in relative insularity, thinking she will be protected by the class she belongs to.

We are all complicit in how we got to this point, where we are all Shalini. She is uncomfortable when her domestic help kisses her child on the cheek, frowns upon her use of water without permission (spraying the tap with a disinfectant after use) and unthinkingly humiliates her by instructing her to get wine in a glass, not a cup. “I recognise Shalini in myself, in my friends, and it makes me feel ashamed,” says Mehta, talking of the powerful relevance of the world she has co-created with directors Pawan Kumar and Shankar Raman. It’s a world based on Akbar’s novel but embellished with more characters, deeper divides, and invokes a Hindu Rashtra in a not-so-faithful adaptation. Called Aryavarta, this world is run by a dictator called Joshi, whose visage bears a startling resemblance to Veer Savarkar. Aryavarta believes that unity is purity, and that there should be no mingling of castes, communities or religions. Each community is expected to live by its own rules behind high walls and in clearly defined sectors.

For Mehta, who has been in confrontation with right-wing forces since she made Fire, the first of her elemental trilogy, in 1996, the world as we knew it has ended—not merely in the fictional Aryavarta but also in reality. “When I see Nancy Pelosi or Alexandria Ocasio-Cortez or Hillary Clinton, I realise that they don’t exist anymore. It is the end of the Saks Fifth Avenue liberal elite. Something will replace it but I don’t know what it is. And though civil liberties are under attack everywhere, I don’t see it as the world coming to an end. Life is balancing out.” But the role of the artist, she says, remains the same: to keep questioning. In this war between left and right, liberals and nationalists, she just wants to be Toni Morrison. In Morrison’s words: ‘There is no time for despair, no place for self-pity, no need for silence, no room for fear. We speak, we write, we do language. That is how civilisations heal.’ Like her great friend Ava DuVernay, the director of Netflix’s stunning new drama on the Central Park Five, When They See Us, Mehta never wants to stop questioning, never wants to stop making and never wants to just walk away because she has been shut out.

And in Huma Qureshi, who plays Shalini, Mehta found an able collaborator. One who conformed to her no-makeup rule, who did not bring the baggage of Bollywood with her and who was up for anything. Says Qureshi with a laugh, “Every day I was asked to do something even more degrading than the day before: whether it was bathing in fetid water, or rolling in half eaten food.” And that was merely the physical. Survival meant she had to betray those closest to her, to spy on those she worked for and to abandon those who would be a burden to her. Stripped of the benefits of her previous life, like Offred in Margaret Atwood’s takedown of a righteous Christian world in The Handmaid’s Tale, Shalini loses her child. Much like Offred, she is willing to do anything to get her back, even as she finds herself tossed from the relative safety of the women’s welfare centre to the labour office which sends her out to work as a domestic help, ironically subjected to much the same discrimination that she herself practised in another lifetime. But her spirit is unbreakable, much like Offred’s: Nolite te bastardes carborundorum (Don’t let the bastards grind you down).

For Akbar whose novel has been expanded beyond recognition, Leila was a deep response to a personal angst—of the difficulty of finding a house to rent with a Muslim surname in contemporary Mumbai. But it was heightened by the photograph he saw in a newspaper in December 2013: of an imam, a Hindu saint and a Christian priest celebrating the Supreme Court decision setting aside the Delhi High Court judgment of 2009 and upholding the constitutional validity of the outdated Section 377 of the Indian Penal Code that criminalises ‘unnatural’ sex. “Who are these people talking for all of us? How can they overturn the people’s right to choose how they want to live? What would happen if a coalition of extremists were to run the government?” says Akbar. That was the starting point of Leila, but that subtlety of aiming at all extremisms may have been lost in Netflix’s Aryavarta. Akbar underscores his discontent saying, “When I first saw Aryavarta it was surprising to me because it is a very big shift from the novel where the Council of all elites of all religions comes together to shape the unnamed city for people of all communities.”

Yet devoid of its mono-religious obsession, this world with its thuggish law enforcers, the Repeaters: the underground rebels; the citizen spies; the black rain; and chained child labourers is horrendously possible.

So is the probability that the iconic Taj Mahal can be blown up in a world that has no place for love; that children of mixed blood can be traded because they have value only as bodies; and that water can be the new currency of exchange.

In this malevolent republic, portraits of Gandhi are replaced by those of Joshiji, whose stories are told to children as modern fables of singular courage. Books, especially by ‘Sen’ are suspect. One’s lineage is one’s destiny—mera janm hi mera karm hai. In order to move ahead one has to erase the sins of the past. Progress and prosperity, as in all fascist states, are supposed to go hand-in-hand with purity. And one has to live for Aryavarta, die for Aryavarta and work for Aryavarta.

Qureshi, with all artifice removed from performance, embodies Mother Courage. “I have always found the mother-daughter relationship to be the closest in a family and I wanted to explore the resilience of a woman in the face of great odds,” says Akbar, whose feminist anthem shields a quiet, burning ambition in its political heart: the relentless search of a woman for her daughter over 16 long years.

Mehta, whose previous TV experience was directing two episodes of George Lucas’ The Young Indiana Jones Chronicles, says the lesson she learnt from the great director is to have loyalty to one’s material.

In her hands, Leila is not quite devoted to the book. But it is eminently watchable.