The Invisible Legacy of ‘Art Films’ 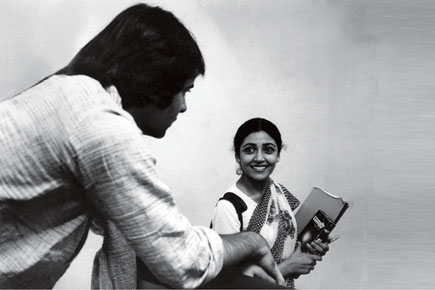 
On 5 April, Rediff.com reviewed the original Chashme Buddoor alongside David Dhawan’s take on the 1981 cult classic. Forget the reviews, the headlines said everything there was to be said about the two films. One gushed: ‘Sai Paranjpye’s Chashme Buddoor is special’. The other scoffed: ‘The new Chashme Baddoor is awful’. Most critics declared the new version a disaster. In essence, the two films, about three boys and their wackiness, couldn’t have been more different—while the original had gentle humour, its remake was slapstick. In a comment on Facebook, somebody wishfully proposed, ‘What if Raju Hirani had remade Chashme Buddoor?’ In the end, it took Amul’s witty hoarding to close the deal: ‘Chakh Re Baddoor! Original tastes best!’

Chashme Buddoor belonged to the middle-of-the-road cinema that emerged in the 1970s and 80s as an offshoot of the parallel movement. It was called so for its ability to reach a middle ground. Besides director Sai Paranjpye, its leading exponents included Hrishikesh Mukherjee, Gulzar and Basu Chatterjee, who could blend, as author Sangeeta Datta puts it, “realistic cinema with sufficient sentiment to capture larger audiences”. Of them all, the name Hrishikesh Mukherjee or Hrishida keeps cropping up with regularity. His clean, feel-good comedies find a resonance in Raju Hirani’s works, perhaps best embodied in the Munna Bhai series.

Whether it was Sai Paranjpye, Basu Chatterjee or Hrishikesh Mukherjee, their films, says Datta, “engaged with romance, quiet heroism and innocent humour; this was, in fact, the credo of the filmmakers if you knew them as individuals”.

Parallel filmmakers believed in cinema’s function as a social tool—to educate and inform viewers. As Shyam Benegal said, “Cinema can certainly be a vehicle for creating social awareness.” From the 1970s until the late 1980s, the movement ran for close to two decades, conjuring a world that was the polar opposite of Bollywood’s song-and-dance routine. Ironically, as the movement died down, it left its imprint on commercial cinema.

To the general movie-going public, parallel cinema draws a blank. In the introduction to her book on Benegal, Sangeeta Datta laments that while researching the text, there wasn’t enough material available on the filmmaker. ‘More of his films,’ she urged, ‘should be urgently released on DVD.’ That was in 2002, when the book was first published, and that complaint still holds. Indian audiences are preoccupied with the idea of ‘entertainment’ and ‘escape’. Parallel films were a bit too hot to handle. It was always, to borrow critic Chidananda Dasgupta’s words, ‘intellectual elites’ —a band of outsiders—that made such films.

“I was an associate director on Mirch Masala—or Garam Masala, as it was called then,” recalls Amole Gupte. “I stayed in Saurashtra for six months in 1985. The idea was not to glam up the locale. You know, there are two types of films: one, where you want to discover the undiscovered location and glamourise it. Another way is to let the story and the setting merge. That was Mirch Masala. And that was Ankur and Nishant—all these films you mentioned.”

Gupte, who made the acclaimed children’s film Stanley Ka Dabba, counts Ketan Mehta, Kundan Shah and Saeed Mirza as his mentors. But he dismisses any notion of parallel filmmakers being underrated in the broader historical context. “Ketan, Saeed, Kundan—they all had their run. They were no less in their time,” he says. “They continue to have a students’ following.”

Their work is widely watched and discussed at film schools. For an autodidact like Ram Gopal Varma, parallel cinema came as a blessing. ‘In my growing years,’ Varma wrote on his blog in 2008, ‘I was greatly influenced by Mr Shyam Benegal’s Ankur, Nishant, Kalyug etc… Company is actually a rehash of Kalyug. Instead of politics in the corporate world, I dealt with politics in the underworld. But I very heavily borrowed from Kalyug.’

Earlier in the same blogpost, Varma speaks of watching Govind Nihalani’s Ardh Satya seven times, a fixation that led to Satya. Based on DA Panvalkar’s short story Surya and a screenplay by legendary Marathi playwright Vijay Tendulkar, Ardh Satya (1983) remains a seminal study of the mafia-police-politician nexus. Kalyug, on the other hand, was an allegory of the Mahabharata. Benegal set the action in 1980s Bombay—more precisely, in a warring business dynasty. It has a complex texture: themes of capitalism, violence, greed, incest and lineage are deftly explored. For the first time, Benegal trained his lens on the rich and their decadent lives. Besides influencing Company, Kalyug’s other major contribution to contemporary films are its Ganapati immersion crowd scenes that inspired several latter-day Bombay films including Satya, Salaam Bombay! and Vaastav.

Datta feels Bollywood picked up the idea of feudal narratives and urban conflicts from parallel cinema. ‘Take Mani Ratnam,’ she writes over email, ‘who has an interesting style of romanticism and melodrama in his use of music and song-and-dance in the middle of a strong socio-political drama.’

Women were often at the centre of many parallel film narratives. Think Smita Patil and Shabana Azmi whose fiery performances brought them to the edge of rivalry. “Shyam Benegal gave Smita Patil to the world. [Martin] Scorsese fell madly in love with her. There was a retrospective of her films in Paris while she was alive,” recalls Gupte. Citing Sridevi’s English Vinglish as an example of good writing as far as the female character goes, Gupte says, “It’s a beautiful poem, written by a woman for a woman. It’s a good mirror piece for our times.” The movement is also credited with discovering and honing the metier of a repertory of male actors: Naseeruddin Shah, Paresh Rawal, Om Puri and Amol Palekar. Some of them were later successfully absorbed by Bollywood.

For screenwriter Juhi Chaturvedi of Vicky Donor fame, it is parallel cinema’s gritty and rooted dialogue that struck a personal chord. Consider this exchange at a riverside between the oppressive subedar (tax collector) played by Naseeruddin Shah and Smita Patil’s Sonbai in Mirch Masala:

Chaturvedi is also reminded of Ankur, in which Shabana Azmi talks in Dakhini. But above all, it was the Awadhi Urdu cadence of Junoon that spoke to her. “I am from Lucknow,” she says. “I could connect with that language. It was as if the makers didn’t care if people [would] understand [it] or not. They simply went by the requirements of the story.”

Chaturvedi suspects Ankur, Mirch Masala, Junoon and others may have consciously or unconsciously prepared directors like Vishal Bhardwaj and Tigmanshu Dhulia who typically rely on rustic dialect. “Paan Singh Tomar,” she says, by way of example, “is rooted in the Bundeli dialect. Irrfan [Khan] refers to a boy as moda and girl as modi. My mom is from the Chambal area. That language is exactly what I used to hear whenever I went to my grandfather’s place. We heard that in Bandit Queen, too.”

More importantly, the virtues of both parallel and middle-of-the-road cinema lay in their canny borrowings from literary sources. “Gulzar took stories from Tagore and Saratchandra Chattopadhyay,” says Datta. “His is not an epic style, but a lyrical, short story style.” She feels Vishal Bhardwaj, Gulzar’s famous pupil, shows the same respect for literature, particularly in his treatment of Shakespeare plays.

Many of these films were derived from direct observation and engagement with society. Parallel cinema has always had an abiding concern for the proletariat. But to say that these parallel filmmakers invented social realism would be a bit of a stretch. India has had a tradition of realistic films which goes right back to the movies of Prabhat studio, Calcutta’s New Theatres, Mehboob Khan, Raj Kapoor, V Shantaram and, of course, the Indian People’s Theatre Association (IPTA) and Progressive Writers’ Association (PWA), which were full of Marxists. As Gulzar, who had many friends at PWA, admitted to Nasreen Munni Kabir, “I believed in their way of thinking.

I had read Karl Marx but was a soft Communist.”

Datta feels it was always a leftist vision that called for change in art, theatre and films. Gupte, whose next film deals with inequality, agrees, “If we say something, we are branded as leftists. It’s not about Marxism. It’s about humanism. In a country where there is rampant inequality, where people don’t have food to eat on one hand, and on the other there are nonstop parties happening at five-star hotels, you wonder, ‘Are people deaf and blind to the sufferings of the poor?’”

Art-house Cinema’s grim depiction of Indian society had a small but loyal following. “Of course, they never drew the huge crowds that Sholay or Deewaar did,” says Gupte. “But they become underground hits. Kamal Swaroop’s Om-Dar-Ba-Dar is a prime example. Cinéastes freak on it.”

Often, their films suffered from poor distribution and marketing. Most of their funding came either via independent sources or government bodies. Part of the reason they went to villages to shoot was that they couldn’t afford to do so in Bombay. Mirch Masala, for example, was made for Rs 20 lakh, a modest amount even at that time. “People had already started making films for a crore and a half. Rs 20 lakh was nothing,” says Gupte.

For two decades, parallel cinema plodded along. But in the 1990s, times changed. Economic liberalisation lifted the gloom, exposing Indians to Western-style consumer culture. This called for changes in cinema, and before long Big B’s angst made way for breezy romances by the likes of Sooraj Barjatya and Aditya Chopra. Films were now being custom-made for nostalgic, homesick NRIs. There was no place for cinema that held a mirror to show India its true face. The proliferation of TV shows made it worse and the movement fizzled out—sending many of its masters into early retirement.

So what happened to them? Shyam Benegal marched towards commercial cinema, somehow managing to retain his aesthetics. So did Govind Nihalani, with Thakshak and Dev, and Ketan Mehta, with Shah Rukh Khan starrers Maya Memsaab and Oh Darling! Yeh Hai India! Others, like Saeed Mirza (with brother Aziz) and Kundan Shah, ended up enriching Doordarshan in the late 80s with Nukkad and Yeh Jo Hai Zindagi. Their biggest gift to Bollywood was probably Shah Rukh Khan. Critics complained of their selling out, calling their later work inferior to the brilliance of their earlier films.

In the end, it seems their efforts haven’t gone unrewarded. Datta says: “Thankfully, there is a legacy which younger filmmakers are acknowledging—which is a good thing.”