Vidya Balan does a great Silk Smitha, but the film robs her role of some of the sheen 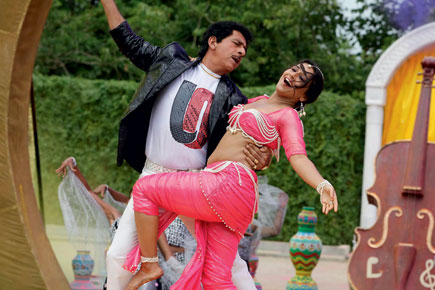 Vidya Balan does a great Silk Smitha, but the film robs her role of some of the sheen


The Dirty Picture is great at creating a complex and engaging persona, but forgets all about ambience and location. Which is odd, because in Once Upon a Time in Mumbaai, it is precisely this evocative picturisation of period and city that turns Milan Luthria’s movie into a little gem. Had The Dirty Picture got Chennai right and had it been able to fine-tune the feel of the ‘Madras’ cubbyhole of the 1980s that produced male fantasy in South Indian languages, this film would have been a winner.

Instead, the film is shot in a studio, on badly designed sets that don’t authenticate the evolution of ‘Silk’ and don’t convey how she was able to zero in on a niche that brought her lucre, publicity and unhappiness, all in equal measure. This is so terribly unfair to Vidya Balan who has got everything right with character construction, but is eliminated from the cultural context  that conjured a Silk Smitha.

Where the movie works well is in the consistent ability of both the writer and Balan to keep tension between a private and public life in foreground and to demonstrate that money doesn’t buy you a damn thing, least of all happiness. ‘Silk’ is intelligent and self aware and this is her undoing. Addicted to glamour and fame, she  knows that her sex appeal is not going to last and is haunted by the inevitability of  fading into obscurity.

Vidya Balan’s Silk puts Naseeruddin Shah’s portrayal of Suryakant, the ageing star who promoted her, into the shade. In cinema, if not in theatre, this actor has reached a plateau. He plays the part of a womanising actor with more industry than art. When Silk promises him that he can have her 500 times if he so pleases, he arches his eyebrows.

Surprised, is he? Someone should tell him that he is not in an Oscar Wilde play.