The Biography of a Song 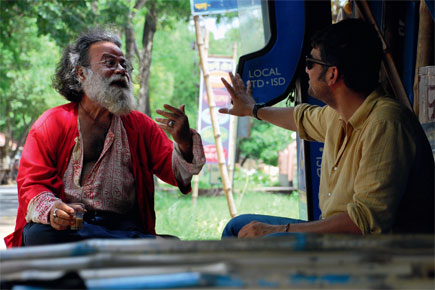 
At some point in Spandan Banerjee’s beautifully shot documentary, You Don’t Belong, the musician Paban Das Baul, sitting in the backseat of a taxi on his journey from Delhi to Jaipur, addresses the Sikh driver. “Gurdeep Singh?” he muses, in Bangla-accented Hindi. “Gur, jaise meetha? (Gur, as in sweet?)” The taxi driver’s initial response is a vague assent, as if he hasn’t quite understood what was being asked. After a few seconds, he decides to correct Paban Das. “Guru means teacher, deep means lamp,” he says in English.

When I first watched You Don’t Belong, at the Persistence Resistance Film Festival in Delhi in 2011, this cross-linguistic conversation about a taxi driver’s name seemed merely an amusing aside. I remember laughing at Paban Das’ typically Bengali insistence on informing the uninterested taxi driver that his name in Bangla would have been ‘Guru-deep’. The second time, though, this stray reference to the light of a guru’s knowledge seems to have greater resonance. After all, what you learn from a guru may be Sanskrit verses or computer algorithms—but it could also be a song.

Spandan Banerjee’s National Award-winning film is about a search for a song. As Banerjee puts it in an early voiceover, his idea was “to follow a popular Bengali folk song from the 1980s and the path it took”. Whichever way one looks at it—tracing a song’s elusive roots, or accompanying it on its journey as it branches out into the world—You Don’t Belong is a film about origins and transformations, about the mysterious act of creating something and the even more mysterious process of letting it go. It is also a film about being out of place—and going back home.

A lot of the film’s evocative charm, its sense of nostalgia, is a function of the song itself. ‘Lal paharir deshe ja, ranga matir deshe ja. Hethake toke manaichhe na re, ikkebare manaicche na re,’ is the recurring phrase. ‘Go to your country of red hills, your country of coloured soil,’ it says. ‘Here, where you are, doesn’t suit you; it just doesn’t suit you at all.’

The film—which translates that last line as ‘you don’t belong’—is as meta a comment on these lyrics as you could want. The song’s imaginary addressee is a migrant, a traveller, someone who has left his home far away. The first time we hear the song in the film, it is being sung by a Baul musician from Bengal, at the Jaipur Literature Festival in Rajasthan. The camera moves down to the JLF identity card, which reads ‘Nimai Goswami, Artiste’, before panning upwards again to show us the face of the man singing. Soon after, back on that same car ride to Jaipur, we hear a version of it sung by Paban Das Baul: a man whose musical collaborations with Sam Mills and Susheela Raman, among others, have hit the international big league, a man who has lived in Paris for years—an itinerant far, far beyond his native Bengal.

As the camera zooms into a huge ‘Tourist’ sign reflected in Paban Das Baul’s spectacles, we have the distinct impression that Banerjee is trying to tell us something.

The song that Banerjee’s film chooses to follow is much more alive in many ways. With versions being sung and recorded by all kinds of contemporary performers, from Baul singers to Bangla bands to the pop artiste on Bangla television, it is a song that feels like it’s part of a live folk tradition.

And yet, the very slotting of it into this category of the ‘traditional’ (Bangla: ‘procholito’) is messy business. Because this ‘traditional’ song has an author.

The poet, Arun Chakraborty, is a 60-something man with a straggly beard, a bird’s nest of hair and a twinkle in his eye. He lives in the sleepy town of Chunchura (Chinsurah changed hands between the Portuguese, the Dutch and the British) in West Bengal’s Hugli district, and his story of how he came to write Lal pahari is a lovely one. In the 1980s, he tells Banerjee, he used to travel a great deal, taking trains up and down the tribal regions of Bengal and what was then Bihar. One afternoon, he happened to get off at Srirampur station. “It was hot, April. The platform was empty. Then, at one end of the station, I saw a leafless mahua tree had blossomed.” Chakraborty, clearly a rather unusual man, did exactly what he would have done if he had been in a jungle: he began to pick up the fallen mahua flowers from the ground and eat them. It was only when a crowd gathered to gape that he realised he’d become a spectacle.

He left the spot, but the tree stayed on his mind. “I saw this mahua tree and my first thought was: ‘why are you here?’” Chakraborty says. “It was not meant to be there, it ought to have been in a jungle; in UP, Bihar, Bankura-Birbhum.” The tree, like so many of us, was a misfit. From that thought came this marvelous song, written—like a great deal of Chakraborty’s poetry—in the idiom of the tribal regions he has adopted as a spiritual home. He and a friend of his recorded a version on tape one Puja season. “It sold like hot cakes… in Assam, mofussil Bengal, Tripura.” Soon, Bauls began to sing it—and for some who asked, Chakraborty says, he wrote an extended version of the song.

A tradition of something like gurudakshina still seems to operate in Chunchura. Schoolchildren who have won a prize for reciting Lal Pahari bring Chakraborty sweets. Nemai Goswami, the Baul artiste we met at the start of the film, comes over to display a green Honda bicycle he won for singing the song.

Versions of the song proliferate. The rustic ‘go’ of the poet’s first rendition— ‘Hethay toke manaicchhe na go’—has become in most urban versions, ‘re’. Other phrases change, the tone changes, even the tune changes. But as the filmmaker interviews more and more people for whom Lal Pahari is now a ‘folk’ staple on the commercial circuit—Kolkata-based recording companies, Bangla bands like Bhoomi and Parashpathar—it becomes clear that none of them either knows of or wants to acknowledge Chakraborty. Two Bhoomi band members—Soumitro and Surojit—talk of hearing a version of it from a Baul who once sang with them, but they cannot quite remember his name. They don’t seem to know anything about its origins. But they have no hesitation in declaring it procholito.

Earlier in the film, still in the back of Gurdeep Singh’s taxi, Paban Das Baul has already staked his claim. It was he who set the song to music, he says, with this poet called Arun Chakraborty, in Tamal-tala, 30 or 35 years ago. Everyone sings the song, but no one acknowledges his contribution, he laments. “E-ke bole guru-mara bidya. (That’s called knowledge-that-kills-the-teacher.)”

A musician called Prabuddha Banerjee, strumming his guitar in Kolkata, says he heard American folk icon Pete Seeger sing a Korean folk song (in translation), and the structure of it was identical to Lal Pahari’s.

Meanwhile, in Chunchura, Chakraborty continues with the tale of how he set the song to music in Tamal-tala. Was there anyone else present, asks the filmmaker. No, just me and Subhash, says the poet.

Banerjee’s film is more interested in throwing up questions than in providing definitive answers. Even when the versions—of the song, of the story of the song—do not match, Banerjee does not insist on a cross-examination. One has some inkling of where his sympathies might lie, but he lets the various tellings sit side by side, leaving us to make of it what we will.

On the one hand are the film’s many gentle references to gurus, which I read as suggesting that those who learn from others ought perhaps to acknowledge their debts. The person you learn from might be the published author of a text, or the villager you heard singing the song on a train—but it is your job to remember him. The way of forgetting is the way of gracelessness.

But it is also true that you never quite learn something until you have made it your own. And whatever premium the modern world might place on the idea of absolute originality, nothing new ever emerges from a vacuum. Arun Chakraborty may have written Lal Pahari, but the dialect he chose, the imagery he used, the lovely lilting rhythm he set it to—these came from a community of people whose language, whose music, whose very geography was one in which he had made himself at home.