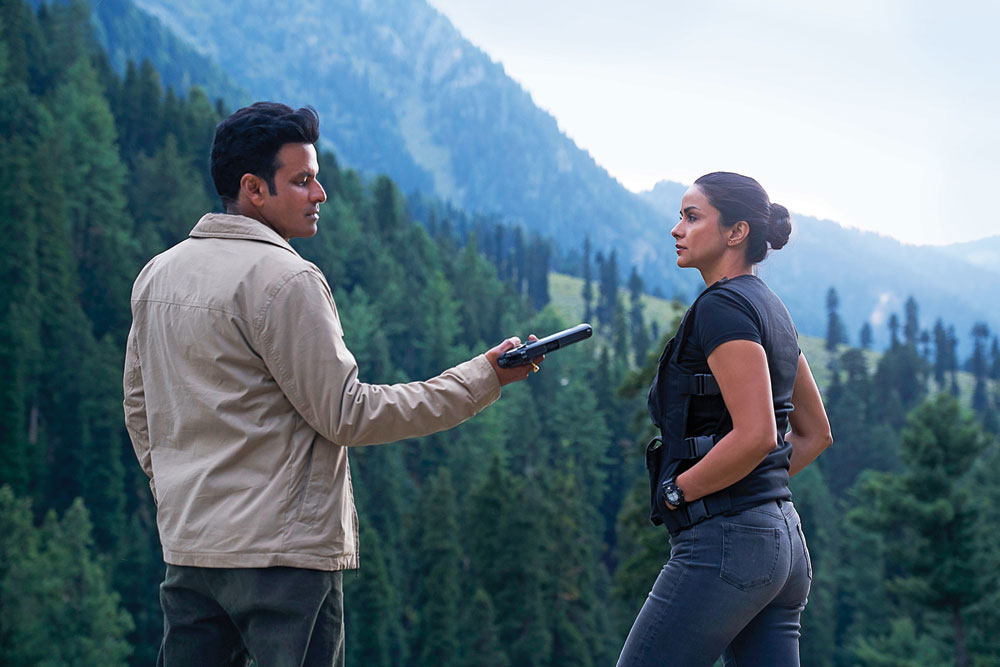 Manoj Bajpayee and Gul Panag in The Family Man


HE IS MANIPULAT­ED BY HIS SON, scoffed at by his daughter, and largely ignored by his wife. He is scolded by school principals, bullied by road ragers, and tormented by his young boss. Yet, like the good, middle-class man that he is, he tries to keep it together for his family. Until he snaps, and his inner superhero, the man TASCed with saving the country from terror, emerges.

In a career crowded with iconic roles, Manoj Bajpayee’s Srikant Tiwari has captured the zeitgeist like few others. Audiences have invited him home and are ready to spend eight-nine hours in his company every time a season of The Family Man unfurls. But that is only part of Bajpayee’s genius. His greatest ability is to reinvent himself at critical points in his career, without compromising his in­tegrity. In a digital world, he remains an analog man, using brainpower to defeat those with bigger weapons and noisier machines.

The 52-year-old first captured the urban imagination when he announced his ar­rival in Ram Gopal Varma’s Satya in 1998 where his Bhiku Mhatre and “Mumbai ka king kaun?” told the story of a city which had a geography and a history—here was Mumbai as a city of outsiders, rejects and peripherals. As the voiceover says at the beginning of the movie: “Kahin se ek aadmi aaya tha, yeh uski kahani hai (A man had come from somewhere. This is his story).” This was not a neverland of summer camps and basketball courts, embod­ied in the big hit of 1998, Kuch Kuch Hota Hai. It was as critics said of that time, a film where you could smell the sweat and feel the grime on Bhiku.

But it was an instant stardom that didn’t translate itself into the stratospheric heights ascended by another young man who had made the journey from a Delhi college via Barry John’s theatre workshop to Mumbai, and who starred in the fantasy of Kuch Kuch Hota Hai. Shah Rukh Khan went from Hansraj College via theatre to television, with Fauji making him a star. Bajpayee, who studied at Ramjas Col­lege, was hyperactive in the theatre soci­ety, and nearly won the part that made the late Nirmal Pandey a star in Shekhar Kapur’s Bandit Queen (1994). Having moved to Mumbai at Kapur’s insistence, he did finally land a big role, that of Bhiku, but not before he had put together a team of writers and actors for director Ram Gopal Varma, including Saurabh Shukla and Anurag Kashyap.


It is something that would serve him well later in his career, creating an eco­system around him, generating work for himself. That was a lesson that served him well after the fallow period between 2003 and 2010 when the applause died down, the cameras turned away, and he stopped being the bright new kid in town. Veer­endra Pratap Singh in Prakash Jha’s Raa­jneeti (2010), based on his interpretation of Duryodhan, was his sleek, new comeback vehicle, and his “karara jawaab milega” became the new buzz phrase. Two years later, as Sardar Khan, the foul-mouthed, wild-eyed mafia don of Gangs of Wassey­pur (2012), he became the darling of the millennials, as a new generation of movie-lovers and critics rediscovered him, just as they embraced his onscreen son, Faisal, played by Nawazuddin Siddiqui. “Keh ke lenge” became the way cool, teenage boys would relate to each other in the new bro code.

Audiences are ready to spend eight-nine hours in his company every time a season of The Family Man unfurls. But that is only part of Bajpayee’s genius

Preparation met opportunity—the years he had spent honing his craft, work­ing on his anger and quietly building a ros­ter of young directors-writers he wanted to work with paid off. Bajpayee’s influence extends beyond writers and directors he has enabled. Men like Devashish Makhija, for whose film Bhonsle (2018), he won a Na­tional Award for Best Actor. Or men like Neeraj Pandey, whom he has sought out and with whom he has done six films. Or old friends like Hansal Mehta, with whom he collaborated on the extraordinary por­trait of an ageing and anguished gay man in Aligarh (2016).

It extends to actors such as Kay Kay Menon and Pankaj Tripathi who feel they would not have been able to make it in a notoriously difficult industry with­out sacrificing their self-respect and their independence if Bajpayee had not shown the way. Bajpayee has been a vocal critic of the A-list in an industry that decides who is worthy of its attention, but instead of wasting his energy by getting caught in an unseemly verbal scuffle, he has spoken through his work.

And in OTT he has found the perfect platform for his talent. After years of flirt­ing with stardom, he became a born-again superstar with Raj and DK’s The Family Man on Amazon Prime Video, now in its second season. In many ways, Tiwari is the perfect hero for our paranoid times, an or­dinary man with extraordinary powers of deduction, who can sniff out terrorists and other such anti-national elements. Bajpayee, the person, is also the embodi­ment of our era—a hero from Belwa, a tiny village in Bihar, who couldn’t make it to the National School of Drama despite four attempts, who taught himself English, who refused to succumb to depression, and who carved out a place for himself against all odds.

In Bajpayee’s persona, there is a perfect ­ meeting of the opposites that define India currently. He is a Hindu married to a Mus­lim. He is a star who lives a middle-class life, laughing at how he can embarrass his daughter by haggling over everything when they visit the mall. He is a Bihari mi­grant who often plays Marathi heroes in a city whose ruling class is deeply suspi­cious of “bhaiyas”. He is an outsider who has been ostracised for declining roles, yet doesn’t wear that awareness like a chip on his shoulder. And he is an actor who has finally got his due as a star.

INDIA IS IN THE MOOD FOR ACTORS like him, men and women who have stories to tell. And Bajpayee’s story is as inspirational as it is aspirational. Here is a boy who leaves his village at 18, convinced he will become an actor in Mumbai, and he does. There is struggle here, years of living in a chawl, not having enough to eat, falling ill, eating and drinking when he could. There are days of rejection, of losing jobs, of seeing films going to more ‘commercial’ actors.

And what is wonderful is that in­stead of becoming yet another member of the Bollywood elite who closes ranks on mavericks and non-conformists, he chooses to have empathy, whether it is speaking up for Sushant Singh Rajput and the treatment meted out to him, or the mass exodus of migrants for their homes. In a world of brand-building fak­ery, he comes across as totally authentic, proud of his roots and also of the distance he has travelled from them.

The Family Man writer and director Suparn Verma says the thing that’s unique and most resilient is Bajpayee’s take on life and his work. Says Verma: “He has seen ups and downs. Highs that could drive you crazy and lows that could break a man. So what does this man do? He grounds himself further and goes deeper into his roots. Closer to his craft and stays close to the source of his passion. Films!” As an ac­tor, he adds, Bajpayee comes from a space of “the scene has to work”, which means if he has to subjugate his own character to raise another for the scene to work, he will unselfishly do so. “Taking out the self has made him raise the bar for everyone else around him and for himself as well. He is now driving himself further than most, he loves slave drivers who push him to zones he hasn’t gone to yet,” Verma says.

India is in the mood for actors like him, men and women who have stories to tell. And Bajpayee’s story is as inspirational as it is aspirational

Challenging himself on a daily basis, Bajpayee uses yoga to create a Zen mind­space. Because though he might be creat­ing illusions, he doesn’t live in an illusion. That makes him work towards the purity of his work as an artist. He is at this point when Bollywood is struggling with the idea of stardom and how to define it. The absence of box-office numbers has meant other metrics are more in use now—how many memes does a show generate, how viral does the dialogue become, how re­latable are the characters. And it’s not just The Family Man. OTT has opened up the universe for a particular kind of indie film—the small, compact thrillers; the little shorts; and the film anthologies, where he was most recently Musafir Ali, the kleptomaniac ghazal singer in Hun­gama Kyon Hai Barpa in Netflix’s Ray anthology.

And the best part is that Bajpayee, like Musafir Ali, has done his rooh safa (soul-cleansing) a long time ago. Now all he wants to do is practise his craft.