Dilip Kumar turned 90 on 11 December. The legend and lore of perhaps the greatest Indian actor ever 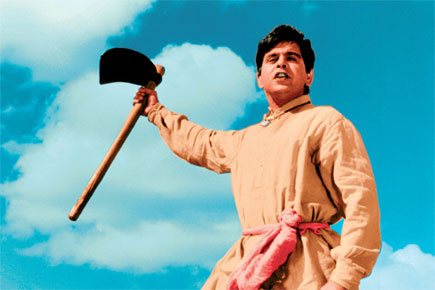 Dilip Kumar turned 90 on 11 December. The legend and lore of perhaps the greatest Indian actor ever


Dilip Kumar was, to use a term that’s trending currently thanks to a book and Mira Nair’s film on it, a ‘reluctant’ actor. He was merely looking for a job—any job—when Devika Rani of Bombay Talkies spotted him in Nainital and offered him a role on the spot.

Kumar’s father’s fruit-selling business was in dire straits. In the 30s, they migrated from Peshawar’s Qissa Khawani Bazaar to Calcutta and then, Bombay’s Nagdevi Street near Crawford Market. His father hated movie people. He used to proudly tell his friend Dewan Basheshwarnath Kapoor that his son would never enter the movies, ribbing him and calling him names—‘kanjar da pyo (father of a disreputable person)’—for allowing his son Prithviraj to become an actor.

The modesty may be self spun, but in acting, everybody agrees that he has few equals. Calling him an ‘idol’ and ‘inspiration’, Amitabh Bachchan blogged in 2011 that Kumar is, ‘2000 years ahead of me in our common vocation.’ In Big B’s book, film acting ought to be classified as ‘before-Dilip Kumar and after-Dilip Kumar’.

Bachchan further observed, ‘His greatest quality was his connect with those [who] stood before him in the frame to act. His strength of delivery and his strength of connect with any character he portrayed has been unique and unsurpassable.’ Jaya Bachchan, who rarely speaks, probably wasn’t lying when she said some years ago: “I do not believe in superstars. For me, the only superstar has been Dilip Kumar and he will always be. I don’t consider anybody after him a superstar.”

The Bachchans’ admiration is not lip service. Dharmendra is another die-hard fan. Mahesh Bhatt once declared on NDTV, “Half the Indian actors have tried to imitate him and half have tried not to. But they are all shackled to him in some way.” Shah Rukh Khan has been unapologetic about modelling himself on Kumar. Writer Salim Khan cites the thespian as his biggest influence. He was one of the reasons—the other was Marlon Brando—that he came to Bombay from Indore as a hopeful. He drops their names often in his conversations, whether it is while describing his own failure as an actor, “I came thinking I would become Dilip Kumar or Brando”, or to chastise others, “You cannot become Dilip Kumar or Brando just like that.”

Much of his mystique arises from the style that critics define as ‘method acting.’ It was Stanislavski who devised this dramatic technique, and his text was used by actors the world over to stage believable performances. Brando gave it a voice in actual practice, famously remarking in a television interview: “We act to save our lives every day.” But here is the catch. According to Javed Akhtar, Kumar could well be the earliest exponent of method acting in the world, a forerunner to Brando. “Brando is eight years junior to Dilipsaab,” he told Rediff.com recently.

Much before Brando could make it to Broadway, Kumar had made his debut in Jwar Bhata in 1944, the film for which Devika Rani was doing a recce when she ran into him in Nainital. Kumar, or Yusuf Khan, who was hired by Bombay Talkies at a monthly salary of Rs 500 (with an annual raise of Rs 200), was a bundle of nerves on the first day of his shoot. He had no formal training in acting. Films were not a part of his growing up years, though he had seen classic Westerns in school and had enjoyed watching them. That was his only connection to the movies.

His first scene was rather simple by any standard. The heroine is about to commit suicide and he jumps just in time to save her. The director instructed him to run, grab her and take her in his arms. Nothing was going right. After a few takes and retakes, he was reprimanded for ‘running too fast’. Then, he dropped his speed. Some more takes and retakes followed. Somehow, one of the shots was accepted. Now, he had to grab the heroine. This was the difficult part. Awkward and shy, he kept going up to her, but never mustered the courage to grab her.

“I felt humiliated. Even the heroine was making fun of me,” he said.

Eventually, he held her with such great force that she had to shake him off. That was Dilip Kumar’s first experience of acting. It is deeply ironic that he went on to acquire a reputation of a great romantic hero.

Through the late 40s and 50s, he was on a roll, belting out one blockbuster after another, starting with Jugnu in 1947. For the audience of his time, Shaheed, Jogan, Andaz, Aan, Naya Daur, Madhumati, Devdas, Azaad, Ram Aur Shyam and, of course, Mughal-E-Azam, remain perennial favourites. Those who came of age in the 1980s saw him in Shakti opposite Amitabh Bachchan as his father.

Some feel that the ‘tragedy king’ tag is unfair to his versatility. Naseeruddin Shah, who worked with Kumar in Subhash Ghai’s Karma, outlined Kumar’s sheer range: “There’s truth and honesty in his early works. And we see the same truth in his comic performances. When I was starting out, I didn’t have any inspirations as such. Of course, I liked Shammi Kapoor and Dara Singh, but I don’t think I could have been like them. But I always felt the truth that Dilipsaab represented in his acting was something I could do as well.”

Kumar had a unique style of working. He had a literary bent of mind and picked his scripts thoughtfully. Today, when we hear terms like ‘calling the shot’ and ‘creative interference’, we think of Aamir Khan. Back in the day, Kumar was the first ‘thinking actor’, just that the term wasn’t coined then. On one occasion, he reportedly told Salim-Javed: “I do have my say whenever I feel incompetence is taking a toll on a film I am part of.” Later, Salim admitted the difference his suggestions made to Shakti. “When we saw the rushes, we were amazed by the new dimension he had given the character we had conceived.”

He worked the way he spoke—slowly and considerately. While his contemporaries were churning out films by the dozen, Kumar prided himself on not being a ‘factory’. Hrishikesh Mukherjee called him the poorest, financially, among superstars. “His choice was always guided by a good script and good director, not merely a good role for himself or big money,” the filmmaker told Screen in 1997.

Often, he was so consumed by his character that he would slip into depression. There is a popular story that he had to visit a leading psychiatrist, Dr WD Nicol, for consultation. In 1982, he gave Filmfare magazine the story: “Yes, the tragedy king. He was getting into the marrow of my bones and disturbing my personal peace. Because that’s what I started believing, that I was born to suffer [and] die. Then when I used to go to England to consult drama coaches and psychiatrists, they asked me to shift to comedy.”

On their advice, he started doing lighter films—and felt “great relief”. In the same interview, he also shared his acting secret, laying emphasis on preparation: “Homework is absolutely essential. If there are any points you have to suggest or discuss with the director, you should do that before you go on the floor. It’s very, very helpful. And all good directors appreciate this. Learning the lines or committing them to memory is one thing. And ‘owning’ them is another.”

He would also do research to get under the skin of the character. For instance, to get the Bhojpuri accent right in Ganga Jumna, he drew from his gardener in Deolali, Nasik, where he went to school. For the song, Madhuban Mein Radhika Nache Re in Kohinoor, he took lessons in sitar from Ustad Vilayat Khan for nearly a year.

The touch of realism that he brought to his performances made him stand apart from his competitors, chiefly Raj Kapoor and Dev Anand. The Big Three had different styles and fan followings. Kumar’s followers say that Raj Kapoor and Dev Anand could never do what he did, while he would have had little trouble playing their kind of roles. Kumar outshone them in the long run.

In real life, the Big Three were good friends. Kumar was particularly fond of Kapoor, his childhood friend from Peshawar. As kids, they used to play soccer together and Kapoor would tell him that they should both try their luck in the movies someday.

By the 60s and 70s, trends had changed. Rajesh Khanna and then Amitabh Bachchan displaced him. And he was ageing. While Raj Kapoor successfully went behind the camera, Kumar had to dump his directorial debut, Kalinga, midway. He took a long sabbatical until director Ramesh Sippy brought him back from hiding with Shakti. Almost in his sixties now, Kumar’s career got an unexpected second wind with Vidhaata, Mashaal, Saudagar and Karma.

And then, he retired while still at the top. If you compare his retirement to someone like Dev Anand’s, who turned himself into a joke, Kumar did well to retain his aura. Even his worst critics admire his conduct and grace.

Today, at  90, Kumar is expectedly weak and fragile. When he recognises old friends, his eyes light up. When he was ill in November, he tweeted (yes, he is on Twitter): ‘I was kept indoors for a whole week due to a touch of fever. A strong Pathan cannot be kept indoors for long.’

The only things that excite him now are his memories of Peshawar and meeting Bollywood friends for old times’ sake. Very few actors enjoy the goodwill that he does in the Hindi film industry, which had been his home since the 1940s, and of which he has been an ‘emperor’—in Hrishikesh Mukherjee’s words—for just as long. If Peshawar is his birthplace, then Bombay is his true home. ‘In more ways than one, it is Maharashtra that holds the roots of my life and career,’ he wrote on his blog (yes, he blogs too) last year.

He now spends time with his family, sisters, nephews and nieces—and friends. He walks at Jogger’s Park (near his Bandra home) in the company of wife Saira Banu. His only regret is not having had a child. In his free time, he catches up on new movies. He follows the films of a few actors and gives them a surprise call if he enjoys their performances. Looking back at his own performances, though, he thinks he could have done better.

“I thought people will soon find out that I know nothing about acting. But nobody did and I survived… Acting,” he told NDTV, “is my biggest accident.”