A film from Bollywood on stealing scripts. Nothing but good tips on the business of plagiarism here 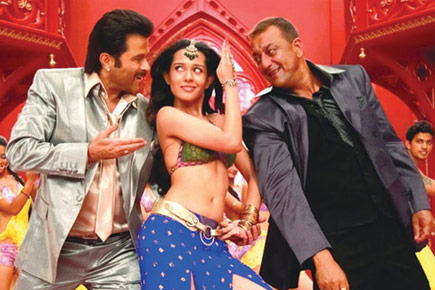 A film from Bollywood on stealing scripts. Nothing but good tips on the business of plagiarism here


Stealing scripts is par for the course in the movie business. In Short Kut, the theft is so unbelievably brazen, you know it’s true. A junior artiste called Raju rooms with a struggling writer called Shekhar. He picks up the writer’s script, gets it photocopied and hands it over to a producer as his own.

The flagrant abuse of intellectual property rights is a measure of Hindi cinema’s mediocrity. A film like Short Kut entertains you with skullduggery in the theft of idea, scene, sequence and climax, but treats it as a con job like any other, with no focus on the moral and criminal bankruptcy of such an act. In fact, Raju (Arshad Warsi) profits enormously from his crime and ends up as a major movie star. Shekhar (Akshaye Khanna) is left fuming, has to eat crow and write another script.

The problem with Short Kut is the casting. Akshaye is an actor who knows the importance of being earnest. He plays the role he normally does, an upright, hardworking character who is honest to the point of being naïve. Arshad is the liar, the go-getter with no scruples, and his chutzpah is so canny he ends up making a complete fool of Akshaye. He steals the film from him, literally, by grabbing much more screen time. Short Kut is a comedy and comedy depends on timing. When the chemistry between the central characters is lost, the film becomes a string of empty one-liners.

The romantic interest in the film, for both men, is played by an anorexic actress called Mansi (Amrita Rao). You can count the ribs in her cleavage. Fortunately, when the location shifts to Thailand, chubby Thai girls, in skimpy wear, provide relief. It is this section of the movie that brings the film to some sort of life. The script pincher gets his comeuppance.

There are very few reasons to watch the film. Neeraj Vora attempts an insider’s look at the industry and its disregard for plagiarism. He ends up giving useful tips on how to go about the stealing.