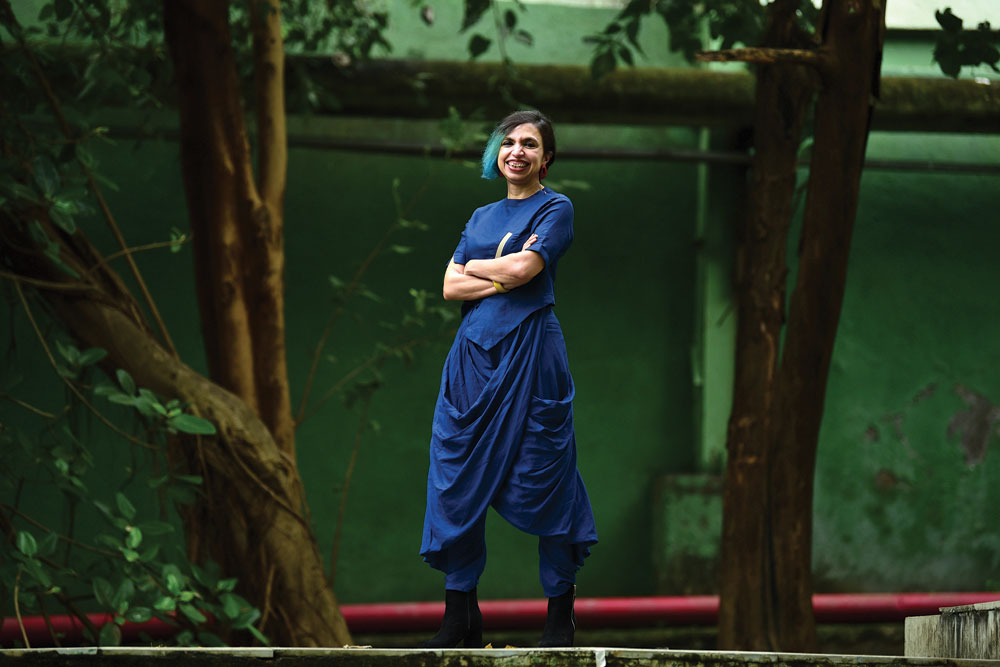 
AT THE AGE of 29, Shonali Bose was the only student in the UCLA School of Theater, Film and Television, California, who was a mother, and would bring her toddler to work every day. Her son Ishan was just two-weeks old when she strapped him to her side, and went back to directing a TV movie that she had to complete as part of her course work. “We shot on film those days. I would very often curl a strip of film on his stroller for him to play with while I work,” Bose says. That was Bose’s relationship with cinema. One that began before motherhood, and has been sustained through out. Not surprisingly, her latest film The Sky Is Pink thrives on this very bond.

This is the real life story of a Delhi-based couple who lost their 16-year-old daughter Aisha Chaudhary to pulmonary fibrosis. It is about a family that’s anticipating their child’s death, since her birth. It’s a subject that few directors would have been able to handle with the strength and sensitivity Bose has, thanks to the time she spent with the Chaudharys and her own attitude towards the loss of a loved one. “When we lose someone, nobody tells us to live that grief. We listen to music, meditate, go to the gym, but rarely do we sit down with our feelings and let it pass. We resist it because that’s what we are conditioned to do, and most of the time we never recover from the pain for this very reason,” she says.

This September (the month that Sky Is Pink premiered at Toronto International Film Festival) it will be nine years, since Bose’s son Ishan died. Her first born passed away at the age of 16, following a freak accident caused by an electric razor. It was an experience that changed her world, and more importantly her perception towards death. Sitting back in her vanity van, she speaks about him with a gleam in her eyes. You mention Ishan’s name and Bose smiles, she exudes power when she explains what that loss meant to her and how she overcame it. It’s surreal to see a mother speak about her deceased son with such infectious positivity, which also reflects in her work and her personality.


“It would have been hard for any other director, who would be conscious about discussing certain aspects of their child’s death. For me, there wasn’t a moment of hesitation,” says Shonali Bose director, The Sky Is Pink

“I had lost my mother at the age of 21, and the way I reacted to her death was the way most people do. I resisted it. But with Ishan, it was different. Ishan taught me how to feel euphoric with death. I actually celebrate his death day, because he made me understand that when your journey ends, it ends. The lessons you have to learn from life have finished. He finished the marathon way before me, at 16. That’s his win and I wanted to rejoice with him. Of course, it took me time, I allowed myself to grieve, but today he’s with me always. My younger son isn’t my constant companion, because he’s busy living his life. But Ishan is. When I shared this with Aditi and Niren [Aisha’s parents], I saw the immediate impact of my philosophy. It helped them heal, in some way,” she says.

Through hours and hours of conversations, she became a friend, a confidant, a well-wisher and most of all a guide to Aisha’s parents. “Very rarely do people lose their children, and this film would have been hard for any other director, who would be apprehensive or conscious about honestly discussing certain aspects of their child’s death. For me, there wasn’t a moment of hesitation. When my son Ishan died, I learnt to celebrate it, it changed everything for me. That is probably why Aditi and Niren were emotionally naked to me. They knew what I had been through. Aditi would call me at 2am sometimes to share something that she’s feeling, because she knew there’s nobody in her whole life who could understand it
immediately like me,” Bose says.

OUR FEAR OF death as a society, our limited ability to embrace pain, the way we shun this natural process, are just few of the many insights Bose brings to light with this film. In it we see parents who devote their lives to making sure their daughter stays alive, but when she’s gone they don’t shut her out. “It may sound bizarre but I talk to my son all the time. It could be my imagination, but the energy and love isn’t my imagination. He gives me signals all the time, especially when I’m nervous about something. He helps me, but first I had to help myself. The bond between a mother and a son is too strong, and now it’s even stronger,” she says.

It’s almost impossible to celebrate the loss of a loved one, but it’s what Bose pushes us towards. When Ishan died, she not only lost her son, but her marriage unraveled as well. “After watching the film some of the audience members came up to me saying, ‘We just need to hug you because it was life changing for us. Your attitude towards death makes us look back at the losses we have had with new eyes’. I can never forget that. No matter who you’ve lost, the love and energy of a person doesn’t leave you and you can seek it,” she adds.

Many viewers might find the film dark, uncomfortable, even overwhelming, but Bose is among the few Indian directors who can do justice to such emotional topics. She’s constantly challenging emotional stereotypes through her cinema. Her previous film Margarita with a Straw (2015) was about a girl with cerebral palsy exploring her sexuality and dealing with the loss of her terminally ill mother. She tackled multiple issues in the film, but she does it unabashedly, almost as though reiterating how these conversations are the need of the hour.

What’s commendable is that her style is never preachy, in fact quite the opposite. Her films are emotional, but she often uses humour as a tool to communicate intensity. A scene in Margarita where Laila (played by Kalki Koechlin) is trying to come out to her mother as bisexual, but her mother presumes she’s talking about a ‘bai’ (Indian maid) is testimony to that. “If you want to say something, or make a point you could either shout it out to the world, or whisper it to each of them individually. I think a film has the capability to do both. I am drawn to narrative cinema, where I can engage as well as entertain, and in the process say what I want to say. I love to take complex issues, break them down and make them easy. Take genocide or sexuality and disability or death, I can write a story about these, but I am not here to give you a life lesson,” she says.

From the character Aditi (in The Sky Is Pink) to Laila (in Margarita) to her debut film Amu (2005), Bose’s protagonists have always been strong, independent, even eccentric women, who take life into their own hands. Much like her, Bose’s characters have never toed the line. Amu, which won her the National Film Award, was set against the backdrop of communal riots and was about a young adopted girl discovering that her biological parents were killed in them. It was a time when the independent cinema wave was slowly rising in India, and Amu fit right in. It was also time in Bose’s life when she was juggling between being a stay-at-home mum and writing her first feature film.

“I started writing Amu when Ishan was six and Vivan, my second born was two. Honestly, in America if you’re a mother of two boys, without any help, you don’t know what’s hit you. It’s hugely impossible. Somehow I made Amu and I remember telling my younger son that I will be away for exactly 10 Sundays just so he doesn’t feel I’m gone for too long. When the film released, it was in Berlin and Toronto, and it was the same time as Anurag Kashyap’s Black Friday. I remember he came to congratulate me, but after that something told me I needed to be with my kids. Anurag’s career took off and mine didn’t. But I am grateful that I made that decision, because I could spend the last six years of Ishan’s life with him,” she says.

“I am drawn to narrative cinema, where I can engage as well as entertain, and in the process say what I want to say. I love to take complex issues, break them down and make them easy,” says Shonali Bose

Growing up, in Kolkata, Mumbai and Delhi, Bose was always the storyteller, the one who asked questions, and set out to find the answers when they weren’t addressed. “Reality, which was so underrated in Indian cinema, especially, is finally becoming the crux of the stories, and there are so many more to be told,” she says.

She leaves us with an anecdote from the shooting of The Sky Is Pink. “There was a moment when we were shooting in a hospital, and I got triggered by memories of my son who died in a hospital. I started wailing and Nilesh my co-creator covered my mouth because the shot was on. As soon as it ended, the wail came and everyone went quiet. I am the producer and director, I am the leader of the set. I could have left the space because I was such a mess. It was a massive meltdown. But I didn’t.”

Instead Bose went around and hugged her crew and spoke to everyone about her feelings. There were almost a hundred people, including gaffers, production boys among others. “I wasn’t sure if as a director and producer, if you show yourself as vulnerable what would happen. But as soon as I did that, I was true to my feelings and we continued shooting and I was absolutely at my best. I wasn’t suppressing anything inside. Today I am very very public with my emotions. As women we are completely discouraged to do that, but I decided to not run away. I decided to stay, for good.”