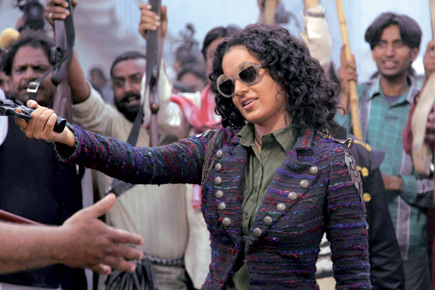 Satire is a demanding art and its first rule is that you have to be clear about what it is you are satirising. Is Revolver Rani an ironic take on the gangster politics of Uttar Pradesh, or is it just a parody of B-grade cinema on the dacoits of Chambal? Till the end of the movie, this is not made clear and the audience is never sure what to laugh at.

The one who suffers most from this confusion of directorial intention is the lead actress, Kangana Ranaut. In the first part of the film, playing dacoit Alka Singh, better known as ‘Revolver Rani’, she does the guns-blazing-while- flying-in-the-air routine as skillfully as a hidden dragon or a crouching tiger. However, once she demonstrates her banditry skills and rescues her paramour from the clutches of the enemy, the movie switches subjects and makes fun of the nitty-gritty of electoral politics in UP.

To be honest, one sequence in this political parody actually works. Alka’s lover is the aspiring Bollywood hero, Rohan Kapoor (Vir Das). Besotted with him, she funds his movies. She even gets married to him—against the beautiful backdrop of the Taj Mahal at Agra—and the video is played endlessly on a news channel. Her Uncle and guardian (Piyush Mishra) thinks this is terrible for her political image. He flatly denies that Alka has married Rohan, says the video is doctored, and then produces another video of Rohan getting married to a different girl at the same location. When people protest, because this new girl has a Muslim name and the marriage rituals are Hindu, he solves the problem by forcing Rohan to convert to Islam.

This is biting satire of political and media skullduggery, but shortly after, the movie goes back into B grade movie parody mode, and everything is over the top and not very funny. Revolver Rani is a disappointing film.