The condition of extreme loneliness in a big city is well known, and director Ritesh Batra examines this very carefully, both with his script and his camera 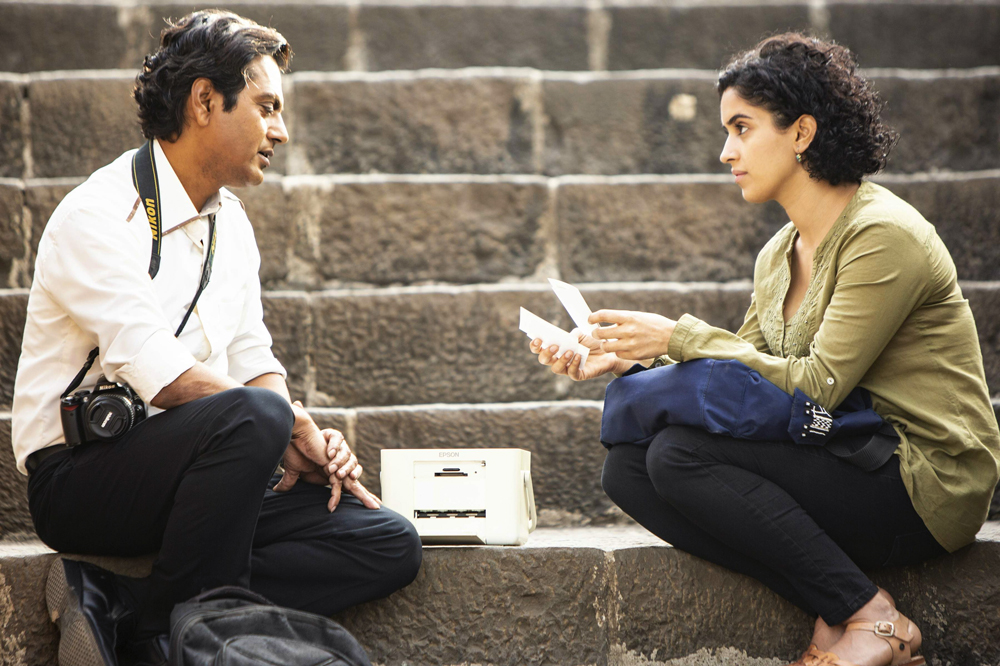 If this film were an Elizabethan play, it would fit in to the medieval theory of the four humours, and the dramatic narrative therein would be associated with black bile, equivalent to a melancholic personality type. Both central characters in ‘Photograph’ are sad in visage and temperament. They have no obvious reason to be so.

Rafi (Nawazuddin Siddiqui) is a photographer at the Gateway of India, in Mumbai. He takes pictures of tourists and sundry walkers, keeping the ocean and the architecture in the Indo-Saracenic style as a backdrop. He carries a portable printer in his backpack, and sells the photos that he shoots and prints. He is a skilled daily wage earner who has come to the city to pay back his rural family loans. He lives in a box like structure, next to the railway tracks, which he shares with four other men from his native Uttar Pradesh.

Miloni (Sanya Malhotra) lives in an apartment with her middle-class parents and their live-in maid. She is the topper of her chartered accountancy class, and works hard towards her qualification exam, one of the most heart-breakingly difficult in the entire labyrinth of the Indian examination system. Her parents know this and leave her to her own devices; a monotonous routine of bus, class, bus, and study after dinner. She appears to have no friends, and the only happy memory we hear about is how her grandfather bought her a bottle of ‘Campa-Cola’ every day, till he passed away. Since then she has drunk no Cola, as the ‘Campa-Cola’ factory has shut down. She has bottled and sealed that memory of happiness in her childhood. She reveals this to Rafi, one late rainy evening.

They met, of course, at the Gateway of India, when Miloni was persuaded to have her picture taken by him. She was so shocked at the photographic image of herself that emerged from his printer, that she left without paying. He tracked her down, not for the pittance he was to be paid, but because he found the persona in her picture interesting. She was as sad as him.

The condition of extreme loneliness in a big city is well known, and director Ritesh Batra examines this very carefully, both with his script and his camera in ‘Photograph’. The script looks at the obvious difference in class between the two individuals, and defines a possible romantic relationship between them as an impossibility. But the camera functions differently, independently, somewhat like the way Andre Bazin describes it in ‘The Ontology of the Photographic Image’. It possesses an objectivity of its own, separate from the author’s social and cultural conditioning, and gives another life, and another chance, to the relationship between Rafi and Miloni.

In this second world of the camera, the compatibility between the two characters comes through very strongly; the melancholia induced by the metropolis binding them together. In other words, there is a third character in the film playing go-between, as there was in Batra’s ‘The Lunchbox’. It is the city of Mumbai, which is so frequently and ubiquitously photographed that it has taken on a personality of its own, depending on the perspective of the photographer.

In ‘Photograph’ it is often the point of view from the old black and yellow fiat taxis. As Rafi and Miloni travel on their various excursions across the city, both real and pretence, the cab, and the space within, is their private world. It is from here that Rafi rebukes a taxi driver who gets chatty and familiar by constantly referring to Ballia, a district in U.P. from which both have migrated, suggesting that he is getting above himself by being a companion to the ‘Madam’ sitting with him. Miloni, in turn, finds refuge from possible sexual harassment from her own social class when she is picked up in the nick of time by Rafi in a taxi. She puts her hand across the space between them in the cab, and holds his hand, in relief and love. From the frame, magnification and contextual image in Batra’s camera, she has found her true love.

But the film script functions on social realism in art cinema, and melodrama in commercial movies. True love, such as it is, would not be possible in either format. So ‘Photograph’ decides not to get into either areas, and leave all judgement to the camera. Like the personalities of all three characters, it results in a melancholic and unresolved ending to a very watchable film.