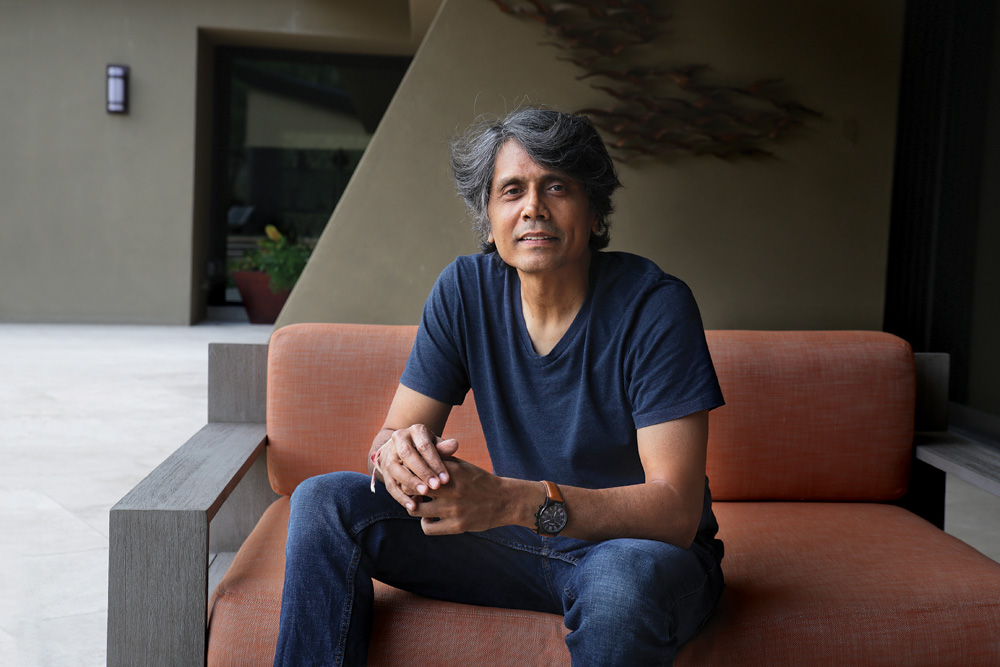 
For someone who has made Hyderabad an icon in the movies, it is ironic that the first home he purchased was in Mumbai in 2007, ten years after returning to India from Atlanta, Georgia. But then Nagesh Kukunoor, who returns to his beloved Hyderabad with a new anthology for Amazon Prime Video, is a spiritual gypsy. Since he first discovered Hyderabad in Hyderabad Blues (1998), after 12 years in the US, Kukunoor has divided his time between Scottsdale, Phoenix, Arizona, where his brother, an oncologist, and sister, a school teacher live; Narayanguda in Hyderabad where his parents inhabit the house he grew up in, located in the heart of the old city; and Mumbai, where many of his movies are developed. “Each place allows me to tolerate the other,” he says. It also means he knows the best biryani in Hyderabad (a caterer by the name of Asif Saheb), keeps his diaries boxed in Scottsdale, and hustles for funding in Mumbai.

Yet 24 years after his first movie, which sparked the independent movie move­ment in India, the 55-year-old filmmaker still works on the margins of the Bol­lywood behemoth. This outsider status gives Kukunoor, the creator, a clear-sight­edness that infuses Modern Love: Hyder­abad. Shortlisted from the 200 stories ar­chived in the Humans of New York series, he has picked up the quirky and the cute, the usual and the unique, the cliché and the oddball and reworked three of the six episodes from an Indian viewpoint. From a cartoonist who doesn’t understand why her live-in boyfriend doesn’t do away with the purple stilettos his ex left behind, to a young self-help guru who still cannot comprehend why his grandmother abandoned him in an orphanage, from a woman biologist who compares her potential dates to animals to another young woman who is troubled by her father spying on her love life, Modern Love: Hyderabad provides a peek into the most gentle of Indian cities.

With its unique Hindu-Muslim culture, its Deccani language that mixes Hindi and Urdu, and its food that celebrates the vegetarian and the meat-eater, Hyderabad is where Kukunoor (he doesn’t use his surname, Naidu) grew up before going to the US to study environmental engineering at the Georgia Institute of Technology after an undergraduate degree in chemical engineering from Osmania University. As writer and Hyderabad resident Balaji Vittal says, “There are no Hindus, Muslims or Christians in our city. Everyone is welcomed with ‘Aau mian (Come brother)’. No matter what the municipal delimitations say, there really is no Secunder­abad, Hyderabad and Cyberabad. There is only one Hyderabad, just like her people.” It is where Kukunoor’s mother kept his diaries, written consis­tently since he was in Class IX. One set of diaries even gave him the inspiration for Rockford (1999), his second movie set in a boarding school, which recalled his own experiences at school.

Kukunoor has retained the habit of journaling and ensures he looks for diaries, usually from Eagle, that give a full page for Sundays. He has diligently kept up with writing in his journal for the last 27 years. What does he record? Oh, anything and everything, says one of India’s most prolific writer-directors, from his wake-up time to his breakfast. “It’s nothing deep,” he says, “just a lot of mundane nonsense. There is zero pressure on writing anything mean­ingful here.” Since 2017 he has taken to backpacking and living in bed and breakfast places. “Travel is my only indulgence,” he says, “not cars, not homes, nothing else. It is who I am.” He says it is quite remarkable what stories co-travellers reveal to him sometimes.


I enjoy writing women characters because the wealth of roles I can explore with women is endless, says Nagesh Kukunoor, filmmaker

These singular journeys perhaps refresh him and give him the energy to try something new— whether it was Iqbal (2005), where he told the story of a hearing challenged fast bowler trained by a drunken coach, or Dor (2006), where two women decide the fate of a man whose life is hanging by a thread. Both featured Shreyas Talpade in important roles, as Iqbal in the former and as a behrupiya in Dor. Says Talpade: “Working with Nagesh has been one of the most amazing and satisfying ex­periences for me as an actor. Nagesh made me unlearn a lot of things. He is so unpredict­able as a director that when you think you’ve started to know him, he will throw a new challenge at you. Some­times he will ask you to improvise and there are times he will ask you to be specific about every little step he will take. That is one of the greatest qualities he has as a storyteller. He has never really repeated his genres. He has never really bothered about what is safe or what is formula. He has gone by his gut feeling and conviction. It takes a lot of courage.”

He has also told the stories he wanted, the way he wanted. One of his stipula­tions is that he doesn’t allow a preview of his film. Iqbal was an exception, because it was produced by Subhash Ghai who held several premiers with Kukunoor in tow. Kukunoor has also done two films with major stars, 8 x 10 Tasveer (2009) with Akshay Kumar, and Aashayein (2010) with John Abraham. While 8×10 Tavsveer was in the realm of science fiction, Aashayein was a celebration of death with some fine cameos by actors such as Girish Karnad and Farida Jalal.

He also writes strong women characters. “Movies generally would show women as one dimensional characters. They’d get some lines, get slapped and then disappear from the scene,” he says. His women have always stood for something, whether it was his latest Good Luck Sakhi about a villager who becomes a national-level shooter or the protective little sister in Dhanak (2015)—echoing the sister in Iqbal— who travels with her blind brother to find a cure for him. It comes from his exploration of newer genres, which pushes him to make even more socially relevant cinema. “The story has to talk to me, like Lakshmi (2014), where I told the tale of trafficking of women,” he says.

It’s not been easy sustaining himself outside Bollywood, which he carica­tured with caustic humour in Bollywood Calling (2001), with its unpunctual stars, its “different” storylines and its often chaotic functioning. He played a small part in it, a smirking villain in black. His creative partner Elahe Hiptoola and he are always frustrated when trying to raise money. “It’s always a challenge,” he says, and that’s when he sometimes thinks he could have had a good life in America, working 9-5, with a wife, two children, a dog, a house with a picket fence and a fat pay cheque. “Instead here I am, falling on my knees, getting up, dusting myself and starting off again,” he says with a laugh. “But there is a deep madness, an obsession to be a storytell­er that has still kept me going,” he says.

“There is a deep madness, an obsession to be a storyteller that has kept me going”

And that’s what sets him off on adventures, whether it is the world of politics in City of Dreams, the Disney+Hotstar web series now in its third season, for which he is shooting, or the relatively new Hyderabad of Banjara Hills of Modern Love. “The reason I don’t repeat myself is because it allows me to live different lives, and forces me to learn something new,” he says.

It’s a long way away from how he first entered the industry, in 1995, wanting to be an actor, which he had trained for, for three years at the Warehouse Ac­tor’s Theatre in Atlanta. “I didn’t know anyone from the industry and I didn’t know any better,” he says. “Now the OTT platforms have blown the industry wide open,” he adds. He, who never played by the rules of the wealthy and powerful, and still struggles to raise money for his films, is a little more at home now.

“I wanted to put my Indianness, my Hyderabad-ness into these stories and transplant them from a western environment. I wanted to put something out there that would be international, that was the challenge”

But his stubborn streak remains. It has both allowed him to make the movies he wants, as well as caused him much angst. With a few exceptions like Iqbal and Lakshmi, he has rarely shown his work before it has released. Cinema for him is an extremely self­ish exercise. “I am not going for the group vote,” he says. But where does he belong? Like the lead character in Hy­derabad Blues, he stayed on in India, but didn’t become the call centre founder in Hyderabad Blues 2 (2004)—he played both parts. But he says when he lands in the US, it’s as if he never left, and when he returns to India, it is a similar sentiment. “It’s a sort of schizophrenic existence,” he says. And he likes to keep the two lives separate.

Growing up in a household where his father wrote in Urdu, where he watched Hindi films with a smattering of Hollywood movies, with only the occasional Telugu mythological film, he is still surprised by the cross-gener­ational fan following of his early films. “The other day I met a young man who spoke movingly about Rockford, which I made in 1999,” he says.

He always has a finger on the city’s pulse, whether it is the timelessness of the cows on the road, the house full of relatives, and the endless helpings of food. All of which he framed in Hyder­abad Blues, which he shot in 1997 over 17 days with mostly friends and family playing themselves. Actor Abijeet Duddala was in Class X when he first saw Hyderabad Blues. As a fourth-generation Hyderabadi, it showcased the city to him like no one else had. He acts in the Modern Love: Hyderabad as a sitcom producer who falls for a female stand-up comic. “I expected him to be more restrictive, and to give very spe­cific instructions on how to emote but he was very accommodating,” he says.

Hyderabad Blues marked the rise of the Deccani film, notes professor C Yamini Krishna. These movies depicted the new city of Hyderabad, which was shaping itself as the high-tech city at the turn of the millennium in relation to the old city with its Nizam past. It also encouraged the rise of diasporic filmmaking. Kukunoor’s return to India was followed soon after by two other engineers who discovered the allure of cinema—Raj Nidimoru and Krishna DK who are now creators of weird and wonderful series and movies such as Go Goa Gone (2013) and The Family Man (2019). Directors like Raj and DK and others who are taking the less-beaten path are, perhaps, doing well because of the Hyderabad boy who first showed the way.