Like many of his colleagues, Tamil superstar Sarath Kumar juggles politics with acting. Now, he’s doing the polyglot thing with his first Malayalam film 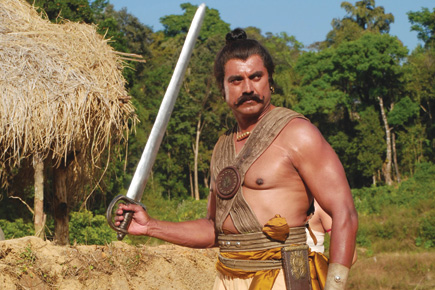 
Bodybuilder and Tamil star-politician Sarath Kumar plays an army general alongside veteran actor Mammootty in Pazhaasi Raja—the most expensive Malayalam film ever made. He recounts how he cut his teeth in politics, courtesy the DMK and AIADMK. Excerpts from an interview:

A No. But there is a pressure on Southern artistes to know other languages. You never know when roles will start drying up, so you need to build on your skill sets. Therefore, many actors here are multi-lingual. This film will be released in five languages, including Hindi and English. I’ve already done films in Tamil, Telugu and Kannada. Experience and working in the South, makes one adept at picking up other languages of the South.

Q Was working with Mammootty intimidating?

A Not at all. Mammootty was helpful and fantastic throughout the filming. My role of the 19th-century Kerala war general who led arguably the first resistance against the British 50 years before 1857 was brilliantly written by MT Vasudevan Nair. So I did it and prepared to get the right accent and intonation in Malayalam. Mammootty’s contribution to my performance was immense. We had worked together in his Tamil debut, so we have a good understanding too.

Q Could you do what you wanted in the film?

A Difficult to say. I did what the script demanded. I had to develop the body language of a chieftain leading a group of guerilla warriors. I enjoyed learning something entirely new. Lots of martial arts too!

Q Is there an ongoing trend in Southern cinema to deliberately make off-beat films, like this one?

A Might be. But one thing is for sure, no matter how much a film deviates from the norm, the audience must be able to relate to it. This film has a different kind of storyline, but the audience will be able to engage with it.

Q You floated a party, Akila Indiya Samathuva Makkal Katchi (AISMK), inspired by iconic Tamil leader Kamaraj Nadar. But your party got less than 1 per cent of votes in the by-election in Thirumangalam, Tamil Nadu. What is your political future now?

A You cannot judge me or my party by just one outing. Politics is a work in progress. We’re building strong foundations for the party. Our party members and volunteers have criss-crossed the length and breadth of the state to spread the message of ‘Kamarajar’ rule. This has meant coming up with employment and educational initiatives for the poor and other policy papers and proposals being shaped up for the development of the state and the uplift of the poor.

Q You were a DMK MP in the Rajya Sabha between 2002 and 2006 and later expelled. What happened?

A Though I was with the DMK for a long time, I was made to feel like an outsider. Key party decisions would always be taken by the family coterie surrounding ‘Kalaignar’ Karunanidhi. I got the impression the party was a family business and its political vision was muddled. But Tamil politics has run in such a feudal fashion for long.

Q And then you joined AIADMK, only to leave it after your actress-wife and party member Raadhika was expelled for anti-party activities. Tell us about that.

A That was a very brief stint. I realised that I did not need to be in a big party to do what I wanted. I had enough intelligence and leadership skills to go it alone and form my own outfit.

Q Since you’ve been with both the DMK and AIADMK, which party did you relate to more?

A In both cases, there is more politics than governance. That’s the problem. There is little in terms of ideation, institution-building or policy initiatives being undertaken. I see politics as a professional enterprise for all-round development. For me, the benefits of a policy should reach the last person in the system. I don’t think either of these party’s heads think that way.