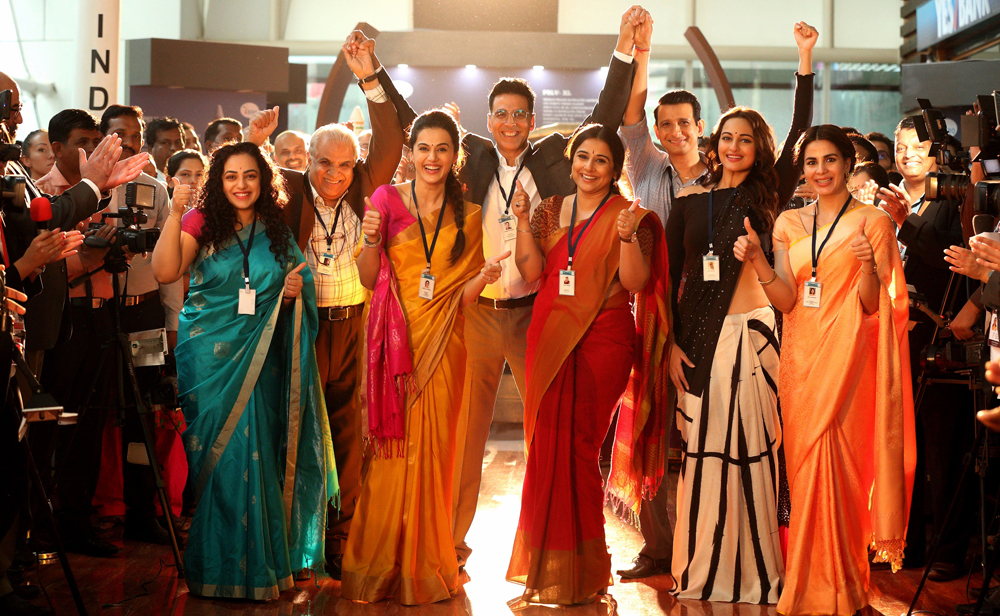 The tender mercy of ‘Mission Mangal’ is that Akshay Kumar, who starts off as the conductor of ISRO’s orchestra, ends up as just another fiddler. The first time you see him is from the back, with his arms akimbo, stage managing a rocket launch. Is he going to pick planets in the solar system, like mangoes from a tree?

Fortunately, it’s ladies day out in ‘Mission Mangal’, so Rakesh Dhawan (Akshay Kumar), the Chief of MOM (Mars Orbiter Mission), is portrayed as an eccentric scientist who is largely restricted to using highfalutin jargon in his acerbic exchanges with the management of ISRO, and with one particular NASA expert (Dalip Tahil), a sneeringly condescending NRI who expresses scepticism about India’s ability to go to Mars with such rudimentary technology. Dhawan is allotted a team of junior space mission specialists, five women and two men, and his most heroic moment is when he gets a set of safety pins, left behind by one of the ladies, stuck in his rear end during a fracas on a metro ride.

Women are from Venus, but not in this movie. As Tara Shinde (Vidya Balan) demonstrates, we are all on earth, and the idea of the mission is to use repeated slingshot like orbits to release the spacecraft from Earth’s gravity, and to propel it towards Mars’ gravitational field with short bursts of the engine, all the while conserving limited fuel by switching the engine on and off. MOM ends up as being the most inexpensive space project ever, both from a mileage and instrumentation perspective, and this is thanks to a team of homemakers, home hunters and baby makers, who use home conservation technology to micro-manage a scientific mission of this magnitude, and to get it right on the first attempt.

So the film is meant as a tribute to Indian women of science. Unfortunately, the film maker has a tendency to trivialise these achievements by using Hindi movie gimmicks from Mars. There is actually a song and dance routine held at mission control HQ, with various team specialists, including Eka Gandhi (Sonakshi Sinha), Kritika Aggarwal (Taapsee Pannu), Neha Siddiqui (Kirti Kulhari), and others, shaking a leg, hip, and torso, in their glamour girl best costumes.

A sense of pride at a nation’s scientific achievements is natural. Hollywood compliments NASA with films like ‘Apollo 13’ and ‘First Man’. These films look at nature, science, and human frailty, and are in awe of any triumph against the odds in space. If nationalism is derived from the experience of watching the movies, then that is a bonus.

Unfortunately, it is exactly the other way around in ‘Mission Mangal’. The film opens and ends with scenes of derision at failure, and scenes of patriotic chest thumping at success. In between, there are jokes about the domestic lives of the men and women of science who sacrifice so much, and who constantly and persistently strive to achieve a sense of perfection in their professional lives. Of course, neither does the film have any qualm about extracting entertainment mileage from Bollywood dancing Indian scientists.

‘Mission Mangal’ is mounted well, but this is a disappointing film on a stunning achievement of Indian Space Technology.