The Japanese Wife weaves an innocent love story out of an improbable modern-day fairy tale. 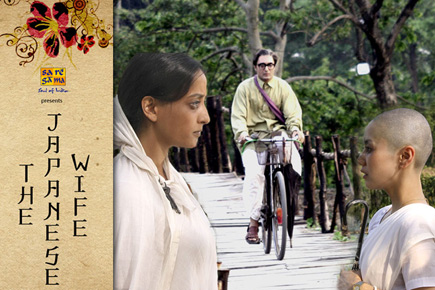 The Japanese Wife weaves an innocent love story out of an improbable modern-day fairy tale.


The Japanese Wife is a tale of three beings. Snehamoy, a reticent school teacher who lives in the interiors of the Sunderbans. Miyagi, a woman who tends to her unwell mother in remote Japan. And Sandhya, a quiet widow and a young mother living an unfulfilled destiny.

Snehamoy (Rahul Bose) and Miyagi (Chigusa Takaku) connect through letters, fall in love and exchange tokens through mail to get married. But their unrequited proximity and deliberate attempts to interact over the phone with the aid of dictionaries don’t help, and the two find themselves in a bizarre predicament of an unconsummated union that lasts more than 17 years. Sandhya (Raima Sen), who visits the teacher’s aunt (Moushumi Chatterjee) in his home, is an unobtrusive witness to this predicament and nurses a forlorn desire to supplant herself somehow in Snehamoy’s life.

Told mainly in English, the film weaves an innocent love story out of an improbable modern-day fairy tale—a world without computers, the internet and video conferencing. Rahul Bose, even as the protagonist, has managed to remain ‘invisible’ throughout the narrative. A difficult brief that Bose brilliantly manages to fulfill. Anay Goswami’s cinematography complements the narrative with wonderfully shot moments. In one such scene, Snehamoy’s hand falls limp on letters from Japan scattered on the floor of a boat. The boat is where the protagonist spends time alone reading his wife’s letters, sometimes even helping himself to masturbatorial pleasure.