Konkona Sen Sharma has played all kinds of working women characters. She speaks to Kaveree Bamzai about her recent role as a transsexual Dalit factory worker 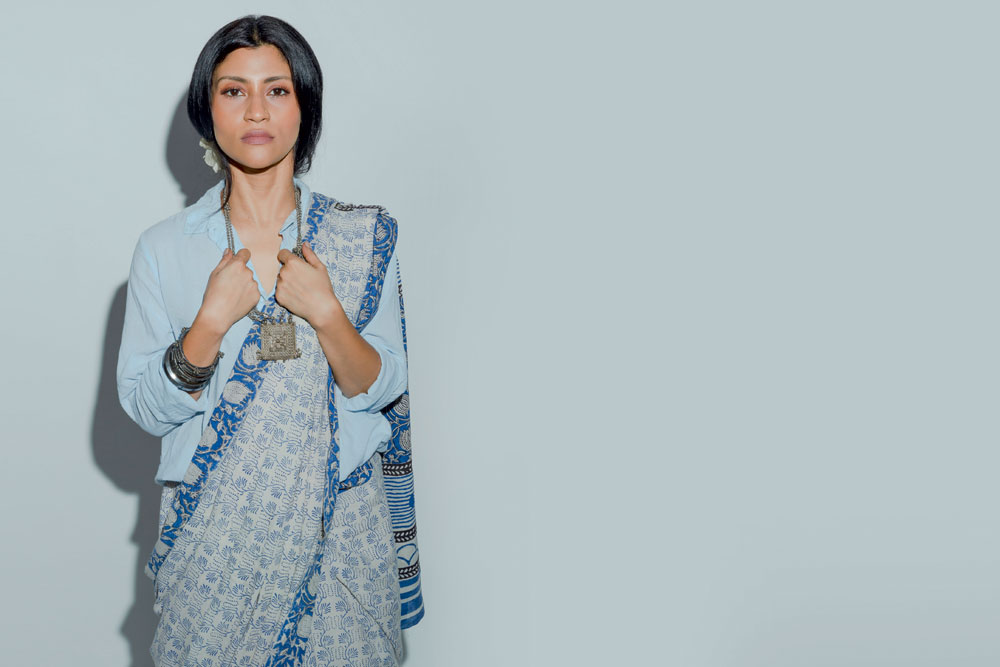 
A SCARF WHICH she ties and re-ties around her wrist, legs splayed when she sits down, and a rage bubbling close to the skin. Bharti Mandal, a transsexual, Dalit factory worker in Neeraj Ghaywan’s ‘Geeli Pucchi’, part of Netflix’s anthology Ajeeb Daastaans, is a triumph. It’s a riveting portrait of a woman on the margins of society, wrapped in her solitude, always the outsider with her face pushed against the window pane. Yet she is not a victim. She is a BCom graduate, wants an office job, is happy to learn whatever skills are needed for it and is unafraid to punch a colleague in the face in anger.

For Konkona Sen Sharma it’s just another day at the office. In a career spanning 20 years, she has played many memorable women characters. There’s Mrs Iyer of Mr and Mrs Iyer (2002), her Tamil accent pitch perfect, her dark eyes flashing at her co-passenger’s improprieties, her instincts always good. There’s Madhvi Sharma, the idealistic young journalist forced to report on pretty people and their foibles in Page 3 (2005). There’s Sona Mishra of Luck by Chance (2009), the young woman who chooses self-respect over selfish love and a career in television over a possibly shinier one as a movie star or star wife. There’s Dolly Yadav of Dolly Kitty Aur Woh Chamakte Sitare (2020) who will do anything to achieve her middle-class dream of a beautiful home and everything that comes with it.

But even for her, Bharti Mandal is quite an extraordinary creation, who embodies so many different identities in one. “Each of us is so many identities,” says Konkona in an interview with Open. “I am a woman, I am an Indian, I am a Bengali, I am an atheist. We can’t compartmentalise. It’s fantastic how Bharti can use one part of her identity against the other, and quite chillingly so.” Deconstructing Bharti, she says, “What options did she have to get ahead? She tried. She has a degree, she is a hard worker, she asked for a raise, a promotion, and she never got any of that. She tried all the right ways of going about it but it’s just that when you’re denied something repeatedly, for generations, you have to resort to other measures. It was very interesting for me navigating these different identities and playing it as one whole.”

Konkona’s fan club is understandably as long as the list of characters she has etched. Producer-director Nikkhil Advani says when she said yes to playing a doctor in the forthcoming Amazon Prime web series Mumbai Diaries 26/11 he was thrilled beyond words. He went back into the writing room and reworked parts of the script because he knew she was playing that part. Ghaywan says he had only her in mind when he wrote Bharti’s character. And Alankrita Shrivastava, who has worked with her in Lipstick Under My Burkha (2016) and Dolly Kitty Aur Woh Chamakte Sitare, says, “If I had to choose only one actor who I had to cast in every film I make, that actor would be Konkona Sen Sharma. I love her beyond words. Konkona carries a whole universe within her. I don’t think there is any part she cannot play. She is a unique combination of sensitivity and intelligence. She can literally convey a million different things with her eyes.”


And with her body, her diction, and her face. Many aspects inform her screen characters. For Bharti, Ghaywan gave her Yashica Dutt’s 2019 book Coming Out As Dalit so she could orient herself with caste dynamics. He asked her to re-watch Krzysztof Kielowski’s Three Colours: Blue (1993) and Patty Jenkins’ Monster (2003). Another film she re-watched on her own accord was April Mullen’s ode to female desire, Below Her Mouth (2016), for Erika Linder’s performance. Konkona says she just fell in love with Linder, a Swedish model and actor, for her extraordinarily fearless performance: “I was just transfixed by her; there was something in the essence of her being. She was at the Toronto International Film Festival when A Death in the Gunj [her directorial debut] was shown there and when Bharti’s character came to me I just channelled my inner Erika Linder.”

Adds Ghaywan, “She had the intelligence as an actor and as a director to understand the intricacies of the intersection she was playing. Both Konkona and Aditi [Rao Hydari, who plays Bharti’s upper caste co-worker] never judged the roles they played. They were keen and that was the biggest motivator for me.”

I am of the human gender. There are so many kinds of masculinity, so many different kinds of femininity. I feel there is a man inside me as well, says Konkona Sen Sharma, actor

Konkona is used to being told she doesn’t do enough work, but as she points out, she’s worked in over 50 films in the last 20 years. “There have to be roles that are good and then the roles must be given some money and resources to reach everybody,” she points out. And they have to say something. I ask if she ever imagines making Mr and Mrs Iyer 20 years later? “We did contemplate that,” says Konkona, “but realised it would be difficult to do it now.” But she’s sad that the Mumbai film industry cannot make “anything about anything” any longer. “Everything is so sanitised now and everyone is going around saying ‘everything is so wonderful, everyone is so amazing’. And that’s what we deserve. Because why can’t we talk about problems in our country and in our society?”

Shrivastava says the beauty is that Konkona makes each performance of hers feel effortless. She just inhabits the character in such a nuanced way that it’s rare. She has worked with Konkona twice, and treasures her not just as an outstanding actor, but as a profound thinker, a fine human being and a precious friend. One would think with talent like hers, there would be no need for her to prepare much for her roles. But Shrivastava has always been amazed with her keenness to read and workshop and explore the character intently before shooting. During the prep for Lipstick Under My Burkha, she says, “I realised that Coco [Konkona’s pet name] has so much humility. She was so willing to push herself, so we could really find the character, the tone of the performance, and the dynamics of her character with the other characters.”

And it was the same with Dolly Kitty. Shrivastava says they worked a lot on Dolly’s character and graph, before the shoot started and it was so helpful. “Even during the shoot Coco is an actor who gives you everything. She has really supported me wholeheartedly when we had to work under difficult shooting conditions because of low budgets. Never an ounce of complaint. In fact, she is always my biggest ally on set,” says Shrivastava. There is no doubt in that because Konkona is a writer-director herself, having made the almost perfect study of masculinities, A Death in the Gunj—her first as director being Naamkoron, a short film in Bengali in 2006.

AT 41, KONKONA is a woman supremely comfortable in her own skin, secure in her choices, clear in her convictions, and sound in her integrity. “I am quite a loner, I love being alone, so I relate to Bharti. Also she is quite jaded and disappointed with human beings, which also I relate to. Human beings from time to time, especially those you love, will disappoint you. Its part of life,” says Konkona, with a laugh.

Konkona says she feels quite androgynous by nature. “I am of the human gender. There are so many kinds of masculinity, so many different kinds of femininity. I feel there is a man inside me as well, like Bharti, just like I am sure there is a woman inside many men. It is so liberating. Often in mainstream popular culture, one sees one kind of desirable woman, or acceptable woman. It’s very difficult to take that conditioning out.”

It’s fantastic how Bharti (in ‘Geeli Pucchi’) can use one part of her identity against the other, and quite chillingly so, says Konkona Sen Sharma

She is also quite capable of laughing at herself. Rohan Sippy, who produced the 2009 comedy The President Is Coming, says, “She is criminally underused as a comic actor, has incredible sensibility, instinct, timing and is superb as a team player too. She did an over the top, completely batty version of herself in the first episode of Side Hero [a TV series on Eros Now in 2018], which I can’t imagine anyone else nailing like she did.”

Over the years, Konkona has developed a sense of detachment as an actor. Sometimes she says, she used to wonder about what she was doing. “Somebody is giving me my lines, somebody is giving me my clothes, somebody is giving me my mark and telling me where to stand, and I’m being somebody else, so what is my contribution? There are times I feel my body is on loan to this character which is a nice distance to have because we are so wound up with our bodies, with our skin,” she says. She always remembers her mother’s advice to her: to take care of her body because it’s her instrument, just as a musician has her instrument and a painter has her canvas.

Great cinema excites Konkona, as does great literature. She has just completed Shuggie Bain, Douglas Stuart’s 2020 Booker Prize-winning novel of a young boy growing up with his alcoholic mother. She also recently watched the recent Malayalam movie, The Great Indian Kitchen, “It’s a great comment on patriarchy,” she says.