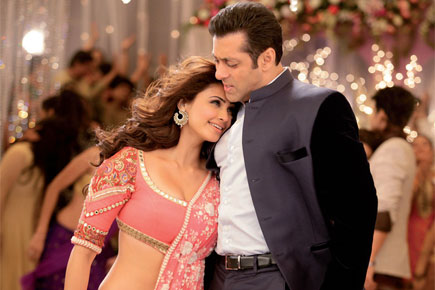 Jai Ho is a morality tale told by characters whose own moral positions seem murky. Coming down to us third hand, from Hollywood’s Pay it Forward (2000) and Telugu cinema’s Stalin (2006), the movie proposes that the world would be a better place if we repaid every favour done to us with three favours done to others. If that equation continues across the population in geometric progression, the film says, many social and economic problems of this country would be solved.

But to connect the philosophy of altruism with the image of Salman Khan is going to be one great leap of faith. Jai Agnihotri (Khan) beats up anyone who comes in his way, so it seems much more likely that the victim of his pummelling will do the same favour to three others.

At any rate, the two narratives, one of good deeds and the other of violent ones, continue in parallel. Jai was a hero in the Indian Army and is now leading the life of a private citizen and ‘do-gooder’. One of the things he does is help a physically challenged girl write her exam papers. One day things go horribly wrong and a chain of events leads to her death. Enraged, Jai uses his fists to exact revenge, violence begets violence, and he is brought into direct confrontation with the villainous Home Minister (Danny Denzongpa).

Meanwhile, the good deed stories continue unabated. The most amusing one is about a rickshaw driver (Mahesh Manjrekar) who takes a drunk safely. home every night from a bar. One night, when the rickshaw wala confesses that this is going to be his last ride because he is going to sell his rickshaw to send his daughter to college, the drunk pulls out a stash of money and pays for the girl’s education so that his rides to the bar continue. Even Ayn Rand had fewer flaws in her moral philosophy. The bitter truth is that morality and the Salman Khan character just don’t go together