Kiran Rao asked Aamir to shut up on the sets of Dhobi Ghat, Rakeysh Mehra’s wife Bharathi nearly walked out of Rang De Basanti. A look at the complexities and comforts of Bollywood’s working couple equations 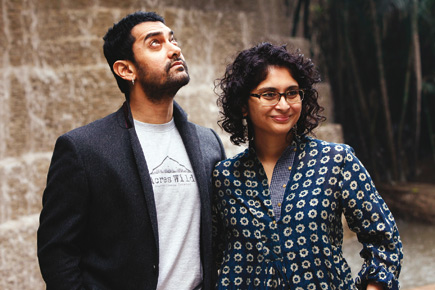 Kiran Rao asked Aamir to shut up on the sets of Dhobi Ghat, Rakeysh Mehra’s wife Bharathi nearly walked out of Rang De Basanti. A look at the complexities and comforts of Bollywood’s working couple equations


Let’s begin the story in Italy. And then head homeward. During the shooting of Nights of Cabiria, director Federico Fellini and his wife, the film’s lead actress Giulietta Masina, had an argument over a scene. Fellini didn’t approve of the way Masina was going about the shot. She wanted to act violently, pour out her frustrations, whereas he desired less aggression. In the documentary Fellini: I’m a Born Liar, Masina’s co-star François Périer recollects, “They were husband and wife and the situation was getting delicate. I reminded him that there’s nothing to worry because I’m married to an actress myself. So, he asked me, ‘Would you mind telling her (Masina) that and the fact that sometimes it gets difficult between couples?’ Before I could tell her, she heard it, came back and redid the scene magnificently.”

For the record, the 1957 film which could have so easily been marred by such creative disagreements went on to snap up that season’s Academy Award for Best Foreign Language Picture.

Working with a spouse —especially a creative equal—can be as rewarding as it is combustible. Yet, that has never stopped couples in cinema from collaborating on projects, Bollywood included, and we’re talking about more than acting together here. Think filmmaker Guru Dutt and his singer wife Geeta, or filmmaker Vidhu Vinod Chopra and his late wife Renu Saluja who edited his movies.

But there is, without doubt, a sharp rise in couples working together in Bollywood today, and this time, it’s not just the men who’re calling the shots.  For every Anurag Kashyap and Abbas Tyrewala who find a muse in their partners (Kalki Koechlin and Pakhi Tyrewala, respectively) there’s a Kiran Rao who breaks stereotypes by directing hubby Aamir Khan. Or, a Farah Khan whose husband Shirish Kunder edits her movies.

Traditionally, Bollywood has had its share of couples quietly but determinedly working side-by-side, shoulder-to shoulder. Yet, there is sense in which couples are being recognised more as equals now. Better halves are increasingly becoming that: better halves. So if Dhobi Ghat notched up critical acclaim, it is as much thanks to Kiran Rao as it is to her superstar husband, Aamir.

Director Siddharth Anand dubs wife Mamta an “equal partner” and admits to being dependent on her for mise-en-scène, mostly costumes and props. If Rakeysh Mehra directs a film, it’ll only be edited by wife PS Bharathi. Ashutosh Gowariker’s laboriously-mounted tomes are incomplete without the assistance of Sunita Gowariker.

So how does it play out on the sets (or the stage, as the case may be), this complicated thing called a relationship?

Naseeruddin Shah, who frequently directs his wife Ratna Pathak Shah on stage, says a work relationship will fail if the two people involved don’t treat each other as equals. “There’s no doubt that I respect Ratna’s talent. She’s indispensable to me and the team at Motley (his theatre group). She brings a certain discipline because she’s so meticulous in what she does. She contributes other than in her capacity as an actor. There’s a clearly-defined equality that exists between us. Having said that, we don’t have any defined roles that we are expected to play in either our family life or at work. Unless you count that I don’t cook,” chuckles Naseeruddin, who first met Ratna at a rehearsal for a play prophetically titled Sambhog Se Sanyas Tak in 1975.

As much as it is exciting to team up with your spouse, creative collaboration requires ground rules to be laid out clearly beforehand, necessitating a fair distribution of work. Producer Sunita Gowariker proposes a neat demarcation of duties. On any film, she heads the business side of affairs while Ashutosh takes charge of all things creative.  Says Sunita, “Because we look into different aspects of a film, there isn’t any conflict of interest. Being his better half, I’m able to envision his ideas and what he’s looking for. Yet, as a producer, I have to account for costs.”

Editor PS Bharathi points out that in any relationship, especially those involving two who share a workplace, it’s vital that they represent the same belief system. “I see things the same way (Rakeysh) Mehra does. Our values are the same. If you believe in the same idea and are both competent in your jobs, I don’t see why there should be any space for professional friction.”

But then, once in a while, there’s always the possibility of taking your spouse for granted, especially when it’s a first-time collaboration. For instance, Kiran Rao, in an interview to People magazine, recalls how during the shooting of Dhobi Ghat, she’d order Aamir to “keep quiet and do what you’re told” while she behaved more formally with other actors. She’s quoted as saying that Aamir noticed it and took her aside to tell her, “I’m not your husband here. Treat me like an actor.”

Kalki Koechlin’s advice for such times is, “When in doubt, keep quiet and keep working.” She remembers her partner Anurag and she had differences over the ending of their upcoming film, That Girl in Yellow Boots. Koechlin has written the script for the film. The situation could have become messy, she says. “I wrote an ending which he thought was too cheerful and final,” she says. “He wanted an open ending. We argued endlessly over it. Before I could get angry, I realised he has a point and took a step back.”

Similarly, Bharathi and Rakeysh had major creative disagreements during Rang De Basanti, and Bharathi almost walked out. She wrote a letter to Rakeysh and voluntarily resigned. Rakeysh says, “I got that letter laminated and kept it on my table. It’s still there, reminding me how that was the last thing I needed when everything was going wrong for me.”

Director Anand adds, “Every couple has differences of opinion. But there shouldn’t be room for ego. We take our arguments in the right spirit because nothing said in the course of a heated discussion is ever personal. It’s best not to take professional issues home.”

When one thinks of spouses working on the same project, one assumes that they get to spend personal time together. Koechlin, though, plays down the notion. “I don’t see Anurag enough and when I do get to see him, especially when we work together, we just don’t have the energy to talk about our personal lives. We concentrate on the shoot, not on ourselves.”

For someone like Shah, who call his family “one madhouse of theatre junkies”, it is a matter of privilege that he can talk shop freely at home. “We are lucky that we can bring our work home, discuss the aspects of acting without causing the sort of anxiety that a doctor couple would feel if they were to discuss the insides of a patient at the dinner table!”

For some couples, influences rub off on each other. Filmmaker Vishal Bhardwaj has often remarked that he developed a taste for classical music because of his singer wife Rekha. And Rekha has arguably rendered her best work for her husband’s films. Think Namak Ishq Ka, Raat Ke Dhhaai Baje, and more recently, Darrling.

More than a few people we spoke to feel that too much is made of couples who work together in films. Says Sunita, “Couples in Bollywood are very normal… they are like any other couple with similar concerns and aspirations.”

Yet, as Shah puts it, “Honestly, I couldn’t have lived with a woman who was in any other profession. It would have only added more woes to my life.”