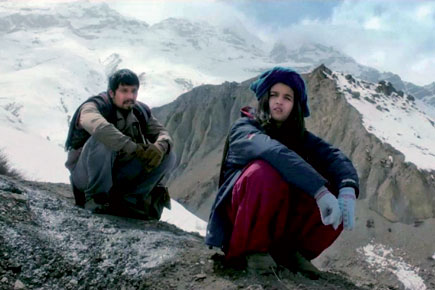 
This movie takes a sharp U-turn from the middle-class, consumerist aspirations of its regular audience and takes us on a journey to another country. Some of us might just get off the highway and trek back to where it all began, to before the never-ending wedding ceremony of Veera Tripathi; back to our comfort zone.

But if we play along, step aside, and give director Imtiaz Ali a longer rope in Highway, a new film emerges; a fresh idiom of narrative expression. In this new language, the experience of living in India is re-discovered. By exposing us for more than two hours to stunning geography, diverse cultures and musical traditions, Ali rescues an idea of this nation that is much older; an idea of India that includes the spiritual and the philosophical.

True, the dramatic tenor of the story sometimes strikes false chords. Veera (Alia Bhatt), the daughter of a rich businessman, is kidnapped one night—in error, it turns out. Had the kidnapper known who she was, he would never have taken such a risk. The rough hewed, monosyllabic Mahabir Bhati (Randeep Hooda), a petty criminal, is stuck with a millstone round his neck, a fresh faced urbanite who he has no clue how to handle, but who, for her part, handles the situation with some ease.

It doesn’t quite ring true here, but at this stage another much larger narrative papers over the cracks, the story of trying to find who we are—our identity and our soul—in this awesomely beautiful Subcontinent. It is a wide screen vision composed for Ali by cinematographer Anil Mehta, and you have to rove your eye from left to right to take it all in.

Basically, Highway is an evocative ‘back to nature’ film, a suggestion that the country we live in is actually in the wilderness, not in the incestuous confines of our infirmities. This idea is Veera’s solace, and perhaps the audience’s comfort as well.