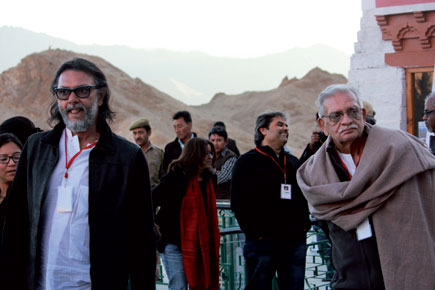 
The venue is an auditorium located on top of a hill and surrounded by tall bare mountain ranges on which shadows and colours dance according to the hour of the day. For those there, says filmmaker Vishal Bhardwaj while presenting the opening show of the Ladakh International Film Festival, it is a rare opportunity to watch the first film of a legend with him. The movie is Mere Apne, made by Gulzar in 1971. Gulzar looks his usual dour, pensive self and says he is nervous about seeing his first film. “Kehte hain hamare karam isi zindagi hamare saamne aate hain, aur yahi hone waala hai,” he says. (It is said that our karma comes face to face with us in this very life and that is what is going to happen.)

In the movie, Meena Kumari plays the role of her life (except for perhaps Pakeezah) as an old woman picked up from a village and brought to a town by a distant relative to look after his child. She then quarrels with his wife and leaves their home. Instead of returning to her village, she feels sorry for two orphans and starts living in the neighbourhood ruins with them. She also becomes a mother figure for two warring street gangs led by Vinod Khanna and Shatrughan Sinha. In the end, in a fight between them as they campaign for different politicians in an election, she is killed by a stray bullet fired by the very men in whom she had found family.

Gulzar is asked a number of questions. The first one is on the graffiti on the walls in the movie. He says that he wanted to reflect the times, especially the genocide that had just happened in East Pakistan. He also got the idea from the walls of West Bengal where such slogans were commonplace; he remembers one of them being ‘I can forget my father’s name but not Vietnam’. There are also posters of the movie Anand and that is because he was its writer and one of the songs, Koi hota, in Mere Apne, is in fact taken from the background score of Anand.

Rakeysh Omprakash Mehra, the director of Bhaag Milkha Bhaag, is sitting in the audience. He asks Gulzar about the impact of the movie at the time. Gulzar replies that there was no special impact, it was just billed as another action film. His peer group, however, saw the nuances and that satisfied him. He is asked many questions and is generous with ideas and memories. He answers only one question in one line and that is mine. I am curious about Meena Kumari playing an old woman and ask how she responded when he asked her to do the role. “I went to her and she agreed to do it,” he says and shrugs.

Ladakh is an unpredictable place. The weather is chillingly nasty for half of the year, but even in summer when snow does not cut it off from the rest of the world, nothing is guaranteed. Phone lines and internet connections are whimsical. Public transport is non-existent. To organise a film festival here is a logistical nightmare. The second edition of the Ladakh International Film Festival had a bit more to contend with. It was to be held in July but then the Uttarakhand floods happened in June. Since it would be in bad taste to host a festival under the shadow of such a tragedy, the dates were shifted to September. But by then, the tourism season was almost over. And in between there was one more unexpected obstacle—Arnab Goswami. And the rest of the media ratcheting up hysteria over Chinese incursions in the region.

Soldiers I spoke to said that there was nothing exceptional about the incursions. “We do it, they do it, it happens all the time,” says an officer. But it led to a 30 per cent drop in tourism and for a region that survives on it, that is heartbreak. At one session, the district magistrate of Ladakh speaks about how he noticed that one specific year the number of domestic tourists had shot up by a lakh, but foreign tourist numbers remained the same. When he asked around, he found the reason—3 Idiots had released the previous winter and it had extensive shots of Ladakh.

The chain of adverse circumstances this year shows in the film festival. There are three venues. The main venue gets a decent audience for main shows, otherwise there are only a sprinkling. At the other venues, filmmakers who are exhibiting films are despondent. One filmmaker finds only the projectionist watching his movie. A National Award-winning actress finds a handful watching hers. Over dinner, I tell a Malayalam filmmaker that there were three people for the movie. He corrects me and says there were two—he was one of them. But he liked the movie.

Rakeysh Omprakash Mehra has been requested by Vishal Bhardwaj to become the festival’s patron from next year onwards. He is a Ladakh regular. He had come here for his honeymoon 22 years ago. Some scenes of Bhaag Milkha Bhaag were shot here. He wrote Rang De Basanti in Leh.

His next movie is Mirza and he calls it a true-blue musical. Someone asks him how he differentiates a musical in Bollywood, where every movie has songs. It’s a good question and Mehra gives a cryptic one-liner that he doesn’t know what Bollywood is. He then speaks of how most songs in his movies are not sung by its characters. “Except for songs which [are required] to be sung,” he says. In Rang De Basanti, no one sang, in Dilli-6 there was only one song, Genda phool, and that was based on him remembering his aunties singing together while they made papad. In Bhaag Milkha, there is a song sung by soldiers in their dorm and that too is based on how he saw students singing in his hostel.

Later, Bhaag Milkha Bhaag is shown and it’s a full house. His inspirations might come from real life, but it’s plainly masalafied. In a scene shot in Ladakh, Milkha runs tied to a tyre and coughs up blood. His coach eggs him on and he starts running again. That is definitely not real. Any coach who does that wants to get the athlete killed.

The second evening’s main screening is The Frontier Gandhi, a documentary on freedom fighter Khan Abdul Ghaffar Khan by American filmmaker Teri McLuhan. She had once been given a book on Khan by a Classics professor in Berkeley. She took it back to New York and after several weeks opened it one night at 2 or 3 am, when she usually did her reading. And then, “within 15-20 minutes something happened and I thought all the electrons in the room had re-arranged themselves”. A few months later, she was in India for the first time as a guest of the Government representing the motion picture industry of the US. During the course of showing her work, she was asked what she would be doing next and she surprised herself by saying that she would be making this film. That was 22 years ago.

It took her so long because she had many hurdles along the way, such as no financier. But the movie is now being shown for the first time in India. It is a striking overview of Khan’s life. He lived to be almost 100 and one-thirds of that time he was imprisoned, first by the British and then by Pakistan, until his eventual exile to Afghanistan. But the film seems to mark no new territory and is more a recounting rather than an interpretation. Plus, it shows Khan’s character in monotonous greatness without even remote flaws.

After the screening, a Kashimiri Pandit filmmaker says that the film gives him hope that he will one day get his homeland back, and the atmosphere turns political because a minister from the state government is also there. He asks McLuhan why people like Khan always lose in the end. She says that towards the end of his life, a journalist asked Khan whether he did not think that his whole life had been a waste of time. His reply was that he did get to plant a seed. “And the filmmaker came along and watered that seed, someone else will come and fertilise it. We all stand on the shoulders of one another,” says McLuhan.

And then she switches to her own life. “After all these years, I still don’t have the distribution that I dreamt of having. But I will. I understand the reasons for the roadblocks and one of them is that we are dealing with powerful stereotypes. One of them shows Islam as unyielding and violent. This story of this man turns this stereotype 180 degrees on its head and that makes people uncomfortable. That’s one big reason I am encountering resistance, but if you think I am going to give up, that is not going to happen,” she says.