Even if you ignore the inane antics of an ageing star, this film is too sneery by half 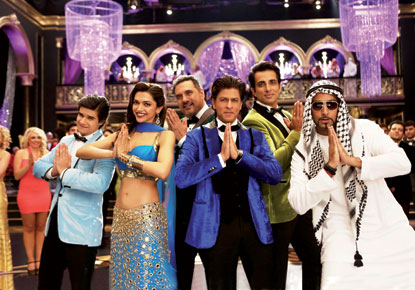 Even if you ignore the inane antics of an ageing star, this film is too sneery by half

Oozing with contempt from every pore, this film looks at the Hindi film audience as the largest gathering of duffers on the planet and then salivates. Lock them into a theatre on a Diwali weekend, it sneers, give them three hours of junk, and those grateful retards will give you a hundred crore for the exquisite pleasure of watching an ageing movie star pick up speed as he rolls downhill.

It is sad to say this, but both the director and the star know exactly what they are doing in this movie, and Happy New Year is not a film that has gone hopelessly awry whilst in production. It is a deliberately scripted, choreographed and designed film, shot exactly as planned, based on an understanding of the essential appeal of Shah Rukh Khan and a comprehension that acting skill or plot originality is not a criterion of excellence when it comes to selling the Khan.

As with Main Hoon Na and Om Shanti Om, the previous collaborations between director Farah Khan and this star, the film is contemptuous of anything remotely intellectual or artistic and instantly satirises it, should it wander across its peripheral vision. This includes the movies it is supposed to be a takeoff on. As it turns out, Happy New Year is not a grand heist film or an Indian version of Ocean’s Eleven. That was just the publicity trumpet.

The movie is about a bunch of jokers who want to rob some diamonds from the organiser of a world dance competition. They turn themselves into a team of dancers who con and blackmail their way to the final round so that they can get close to where the big shiny rocks are locked in a safe.

Charlie (Shah Rukh Khan) doesn’t want the diamonds for the money, but to destroy the Don (Jackie Shroff) who has ruined the good name of his Dad (Anupam Kher) and sent him to prison. He needs loyal allies and professionals for the job. The usual suspects are rounded up. These include a safe cracker (Boman Irani), who also happens to be a crazy Bawa from Colaba’s Khusro Bagh. Then there is a hacker (Vivaan Shah) who can rig things whenever the voting for the dance competition begins, a bomb disposal expert (Sonu Sood) for the heavy-duty stuff, and a clown (Abhishek Bachchan) for comic relief. Along the way, they add a bar dancer (Deepika Padukone) to teach them the basic moves. She is also a vernacular nationalist who believes that good days are here for India.

The film is a comic strip with an unending series of set pieces, mostly gags and Hindi film dances. The big screen is used like a television monitor and apart from a few establishment shots, the film looks like several episodes of a TV serial compressed into a three- hour jamboree. The theme tells of how a bunch of ‘losers’ turn into ‘winners’, thanks to a cool dude called Charlie.