The celebratory and introspective spirit of drunkenness on screen 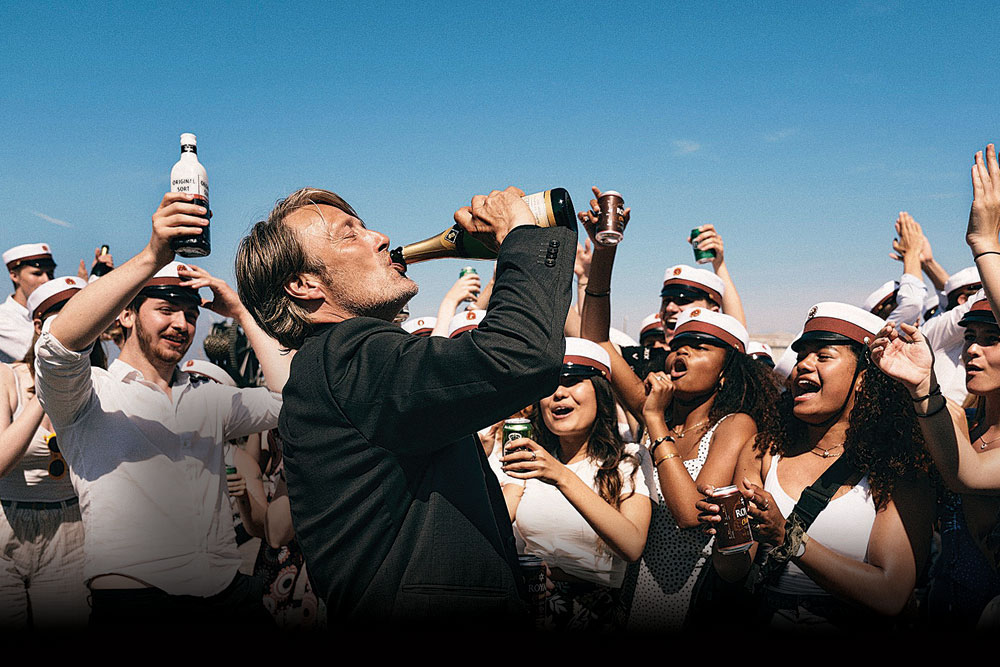 Mads Mikkelsen in Another Round


THE STENCH OF vodka is so strong on Mads Mikkelsen’s breath in Another Round, we can smell it off the screen. In Danish director Thomas Vinterberg’s 2021 Oscar-winning film, four teachers suffering a mid-life crisis decide to participate in an experiment. Norwegian psychiatrist Finn Skårderud suggested that humans are born with blood alcohol levels that are at least 0.05 per cent too low, and the key to self-actualisation lies in trying to make up that deficit. The four men put the theory into practice only to realise the increased dosage leads to results more self-destructive than self-actualising. If you decide to take the glass half-full perspective, there’s some joy to be had in Mikkelsen and Co’s misadventures. Like Homer Simpson said, “Here’s to alcohol, the cause of, and solution to, all life’s problems.”

Remember in the Steven Spielberg classic, when ET knocks down a few beers, and Elliot gets second-hand drunk through him, burping and slumping into his chair. Watching Another Round and revisiting some of our boozy favourites over the past year, we can’t help but feel a similar psychic connection with the drunken characters on screen. Stuck in isolation, you get to taste more than champagne on a beer budget. Sip on Suntory Whisky “for relaxing times” with Bill Murray in Lost in Translation (2003), and martinis with Bill Murray in On the Rocks (2020), before topping it off with Pinot Noir, not merlot, with Paul Giamatti in Sideways (2004). An ideal one for the road would be “Singapore Slings with mezcal on the side and beer chasers” with Raoul Duke in Fear and Loathing in Las Vegas (1998).

There is a vicarious pleasure in watching people get drunk on screen, as we get to live through their inebriated exploits in a safe, controlled environment. True, no movie can beat the real thing. That feeling after the first couple of drinks where you begin to notice things you normally wouldn’t: the strained gentleness in the way your friend places her glass on the coaster so as to not break it. Couple more down, the moves of the bartender mixing a drink bleed together in a haze. Or how if you’re with a large group, how drunk you are doesn’t always depend on your blood alcohol level. The degree of drunkenness somehow averages itself out.

Alcohol has soaked some of cinema’s most memorable moments. For the most part, it has occupied the middle section of the spectrum between the cigarette and drugs. Meaning its identity has had positive, neutral and negative connotations. There was always a fetish to the cigarette. Those cancer sticks never looked cooler and more glamorous than when Lauren Bacall lit one, Humphrey Bogart held it between his fingers, or Jean-Paul Belmondo let it dangle from his lower lip. Drugs didn’t share the same reputation in the Production Code era. Their representation as a recreation has seen a seismic shift towards neutral and positive in recent years. Simulating the out-of-body experiences of taking hallucinogens has allowed for visual experimentation. Gaspar Noé has made a career out of it.

When alcohol is treated as “the rose-colored glasses of life” as novelist F Scott Fitzgerald described it, drunkenness takes on a celebratory as well as an introspective spirit. Much like Another Round, John Cassavetes’ Husbands (1970) too centres on middle-aged men in the throes of a shared existential crisis following the death of the fourth member of their clique. They too would rather go on a booze-soaked bender, rather than come to terms with their mortality. JeanPaul Belmondo and Jean Gabin go on a bender of their own in Henri Verneuil’s A Monkey in Winter (1962), reflecting on lives past and those that could never be. Alcohol becomes the catalyst for the rising homoerotic tension between Robert Pattinson and Willem Dafoe in The Lighthouse (2019).

Edgar Wright gave Philip Kaufman’s Invasion of the Body Snatchers (1978) a drunken update in The World’s End (2013), where five friends ward off an alien invasion in the middle of their pub crawl. A whole comedy tradition has been built on such drunken antics. Think Kristen Wiig trying to sneak into first class in Bridesmaids (2011) or Kangana Ranaut venting her frustrations in Queen (2013). Drunken antics over a quarter at a TASMAC (Tamil Nadu’s state-run alcohol retail outlets) are a regular feature in comedy sequences in Tamil movies. In the Malayalam film Paavada (2016), two alcoholics try to distil their own pee.


Alcohol has soaked some of cinema’s most memorable moments. For the most part, it has occupied the middle section of the spectrum between the cigarette and drugs. Meaning its identity has had positive, neutral and negative connotations

For a long time, Indian cinema had surrendered to moralising alcohol consumption. Filmmakers mostly took a black-and-white perspective. Drinking was a habit either associated with the villains, or the vice-of-choice for the urban rich and the lovelorn. Characters who drank responsibly were a rarity. Drinking was, and remains, a gender issue. While the alcoholic hero has often been romanticised (from every Devdas to Arjun Reddy), the women who drank usually fell in the vamp category. Be it Bollywood or Kollywood, often representations of alcohol consumption are limited to the item numbers where men drink and dance around a scantily clad woman.

There has been a slow shift away from the male gaze in at least some spheres. Recent films like Margarita with a Straw (2014) and Veere Di Wedding (2018), and OTT shows like Four More Shots Please! (2019) and Bombay Begums (2021) have helped destigmatise and normalise women drinkers to an extent. Watching women be free and self-possessed, of course, continues to draw the ire of threatened conservatives. Few critics have argued that simply equating libation with liberation turns alcohol consumption into a reductive feminist marker. But that’s a topic for whole other spirited debate.

The pleasure of joyful intoxication that comes from watching drunk people on screen depends on how convinced you’re by their drunk acting. The rule of thumb is: to act drunk is to try to act sober. Because those who are really drunk will try to blend in harder than the others to downplay their drunkenness. It is a thin line of difference. It’s about attempting to be calm and collected, but for the occasional slip-up: be it a stutter, a stumble or a swerve. Being drunk and acting drunk are two separate things, as Mikkelsen will tell you about his approach to Another Round. “The classical thing for an actor to do when they play drunk is to try to pretend they aren’t drunk. Like drunk people do, trying not to look drunk. That’s fine up to a certain limit but we pass that limit in some of the scenes. So, we had to check out other approaches, like the way you walk when you are just completely wasted. But truth is stranger than fiction. If you Google some of those YouTube videos of drunk Russian people, it is just insane what they do. That inspired us,” he said in an interview with The Hollywood Reporter.

The cast of Another Round not only drew from their real-life drunken experiences, but also learnt from changes in their own speech, movements and mannerisms during the ‘alcohol boot camp’ that director Thomas Vinterberg put them through. Mikkelsen called drunk acting “a classic danger zone for any actor.” He told Deadline, “You just have to make up your mind that it has to be integrated — we will try to take the clownery out of it, but in real life it is very clowny, just insanely clowny.” Then, there’s the outlined-in-bold style of drunk acting. Consider those whose inhibitions are shed with each drink, like Ranaut in Queen. Their flashier side also reveals their funnier self.

Charlie Chaplin, who was pretty much the gold standard for drunk acting, could do slapstick and subtle with ease. We see the former in One A.M. (1916), where chaos ensues when he returns home drunk, and the latter in Limelight (1952), where he plays a celebrated clown turned washed-up drunk.

CINEMA ASIDE, TV shows are full of local watering holes that are second homes to its beloved characters, and by extension, our own. From Moe’s Tavern in The Simpsons to Kavanagh’s in The Wire, we’ve hung out with many a makeshift family — in spirit at least. It felt like you had your own barstool to escape the mundanity of our daily lives. Cheers perhaps set the template with its “everybody knows your name” comedy, before How I Met Your Mother and It’s Always Sunny in Philadelphia built on it in recent years. Who hasn’t schemed up get-rich-quick schemes like the fivesome at Paddy’s Pub, if not with the same level of gleeful misanthropy?

We all have our own favourite bars, weekly if not daily hang-outs chosen more for their cheap alcohol than inviting ambience. The 2020 documentary Bloody Nose, Empty Pockets captures this with poignance. Brothers Bill and Turner Ross follow the regulars of a Las Vegas dive bar on its closing night. The truth is the Roaring ’20s is still open, it’s really in New Orleans, and these barflies were actually hand-picked by the directors. There is an authenticity to even this staged scenario, as the patrons sing, dance, flirt and drown their sorrows before they bid farewell. In the barflies finding refuge in this makeshift community are stories of unfulfilled lives, unrealised dreams and lots of regret.

Though the brothers imagined the film as a reaction to the Great Recession of 2007-2009, the film takes on a whole new meaning during a pandemic. “On the one hand, the themes in the film are still relevant and resonant. And, on the other hand, they change their articulation because of where we’ve ended up at this moment,” said Turner Ross in an interview with Slant Magazine. “And not only what they’re talking about, what the people are actually saying to each other. The context of the film, this idea of the end of things and uncertain futures, wrestling with identity and where we’re all headed, these sort of existential themes that are intertwined in the conceit of the film.”

The Roaring ’20s thus becomes a proxy for our own favourite watering hole. What once piqued us, now makes us pine: wading through waves of perspiring men to get to the bartender who still can’t hear our order, and the liquored laughs and awful tunes that soundtracked our nights. With our anxiety reaching fever pitch with a 24×7 bad news cycle, many of these movies and shows helped take off the edge. If not anything else, watch two old barflies bond over their shared alienation in Bloody Nose, Empty Pockets, and Mikkelsen’s climactic dance in Another Round, and it will cure at least some of the anxiety that ales you.