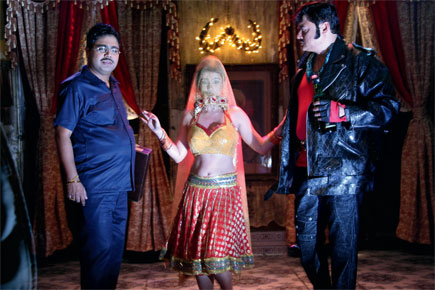 
Bengali nostalgia meets political satire and fantasy in Anik Datta’s Bhooter Bhobishyot. He collects generations of familiar angst, anxiety, satire and sentiment, and casts them in the mould of ghosts, defending their dilapidated abode (Choudhuri bari) against the onslaught of new hungers for space in the changing landscape of Kolkata. These bhoots betray a typical Bengali nervousness about the aggressively self-aggrandising Marwari businessman—in this case, a real estate shark, a ‘promoter’ (a popular Kolkata term for realtors), who uses legal and extra-legal devices to unshackle a property of its conflicted titles, in pursuit of designs for their predictable conversion into a shopping mall. Each ‘late’ character of Choudhuri bari represents a different corner of the memoirs of Calcutta. Cruelties, loyalties and ambiguities of worldly epilogue are brushed over with shades of ghostliness—some sepia, some black-and-white. Such is the nature of ruin, Datta suggests, as he endears his historical incumbents to the contemporary audience, for whom they are but fragile has-beens, much like the house they inhabit.

He slips in snapshots of their complex worldly lives—a merciless zamindar who met his match in vengeful dacoits, ever-sycophant to the colonial officer Ramsay, a disgruntled has-been-singer Kodolibala who had romanced a Choudhury dandy outside of wedlock and died of heartburn, a warrior-khansama (cook) from the court of Siraj-ud-Daula, a drug-overdosed kid, a love-suicide girl, a Partition victim, a 1970s revolutionary, a Kargil Army martyr.

Class, gender and culture battlelines are redrawn along the landscape of ghostliness. They are not citizens or consumers. They do not need the resource base that makes mortals captive to the power of State and capital. They do not need money, jobs, power. They do need some space, though, space that is increasingly feeding the greed of promoters. Bodyless, they turn stateless. Uncanny yet vulnerable subjects at the abject mercy of modern power, their claim to a home is not entertained by political parties, nor by the voluble subaltern-championing intelligentsia, as they don’t bring votes, publicity, populism, empathy, guilt and so on.

Yet, bhoots don’t shed the peculiar socio-historical baggage of their worldly existence. The has-been Kodolibala pooh-poohs her ghostly suitors, retaining the arrogance of her worldly charm. Her womanly confidence is somewhat shaken by the counsel of the younger, twang-accented, rich suicide girl who reminds her that seduction in this age is not the same as in the 1940s. She will have to learn the modern ropes of womanly intrigue. The ever-threatening fear of obsolescence that pervades aesthetic, cultural and sentimental worlds in neo-liberal times, manifests in Kodoli’s anxiety to be desirable in contemporary terms.

Calcutta trudges along with the ruins of its close encounter with colonialism, its postcolonial nervousness, violent Left-struggles of the 1970s, and animates the residual opportunist politics that rides any cultural marker available—Tagore, Nazrul and their ghostly fraternity—in the present-day impasse. Datta captures vividly the complex networks of arbitrage and opportunism, with footnotes of Bengali masculine humour about shit and sex, through the characters of party-boss Promod Prodhan who demands a cut on the land-deal, and Haat-kata Kartik—a don who doesn’t have an arm, played superbly by Saswata Chattopadhyay (Bob Biswas in Kahaani)— who is co-opted by the ghosts in their struggle to regain their home. Social networking, via Spookbook, is resorted to, to find allies. In a state of limbo, many of these characters, alive and dead, make sense of time as a concatenation of past vocabularies, present opportunities, buried sentiments and heroic postures.

Kolkata’s Metro was built in the early 1990s, and it still runs along a single route, albeit with two more stations having been added recently. Most of the newly-added stations are named after dead poets and nationalist heroes. A facade of heroic dignity is maintained through the most desperate of struggles to jump on the neo-liberal bandwagon of opportunity and imagination. Ghosts are writ large on every surface of this city. Spectres of Marx (with apologies to Derrida) quite literally circulate in the fluid networks of song, poetry, slogan, slang, graffiti, sentiment, hope and disgust that make time come alive in this muggy, irritable city. New Delhi got its complex grid of overhead and underground railway tracks, criss-crossing the vast city and its suburbia, all in a span of five or six years. The new-found pace and mobility of New Delhi is the site of the constitution of a legitimate ‘now’—one that has seen a nod from forces of sovereignty and control. The half-done Metro lines of Kolkata remain a sediment of a time, an ever-evasive promise that once tried to rise up in a glorious spectacle, of which only the debris remains today. The southern half of the city houses respectable middle-class apartment blocks, upmarket malls—here too, clumsily burdened with the burden of Partition and the Bangladesh war—in stark contrast with slums along railway lines and mushrooming bazaars, the unplanned concrete rhizome that raises its desperate head, time and again, in an attempt to snatch resource and opportunity from the sharp alignments of the upper-crust city.

The central part is noisy, official, memorialised and ambiguous. It houses tall administrative buildings, two big five-star hotels, Victoria Memorial, Race Course, Maidan grounds. This is the zone of political rallies and demonstrations, everyday political drama. The north is the relic wing of the city: decrepit houses with ornately framed crumbling windows, Mother Teresa lanes of messianicity, mosque lanes of pre-colonial memory. The eastern wing, developed over the past two decades, has the arterial bypass road, infotech and corporate visitors, NRI retirement blocks and new stages of land-controversy, agrarian transformation and informalised labour. The west houses the city’s industrial pockets of Metibruz, gated towers of Alipore and abode of two goddesses—Kalighat. The novelist Amit Chaudhuri recently published a lecture in The Telegraph, in anticipation of his new work Calcutta, lamenting the decay of the structures of memory in the relic wing, and the need for a Europe-like attempt at architectural and cultural conservation. Manas Ray argued with him in The Hindu, asking Chaudhuri to take cognisance of the economic narratives of various under-cities that manifest themselves in this ugly, incomplete rhizome, and the human faces of opportunism that give rise to its clientele. The call for nostalgic conservation is essentially a sentiment of the upper-crust.

In his film, Datta expresses a similar sentiment via the voice of sedimented history: the bhoot. And the ‘promoter’ and don—the new entrepreneurs of illegality—play to these claims of memory and conservation, he shows. An economy of memory breathes a good amount of life into the ‘dying city’. And it expects the applause of the likes of Anne Wroe (whose recent eulogy to Calcutta was published in The Telegraph), Dominique Lapierre and Sujoy Ghosh.

In the name of the colonial father, Leftist son and not-so-holy contemporary spirits, Anik Datta’s celluloid adventure is a worthy tribute to the city’s elo-melo (zigzag/irregular) material and ‘spiritual’ life.