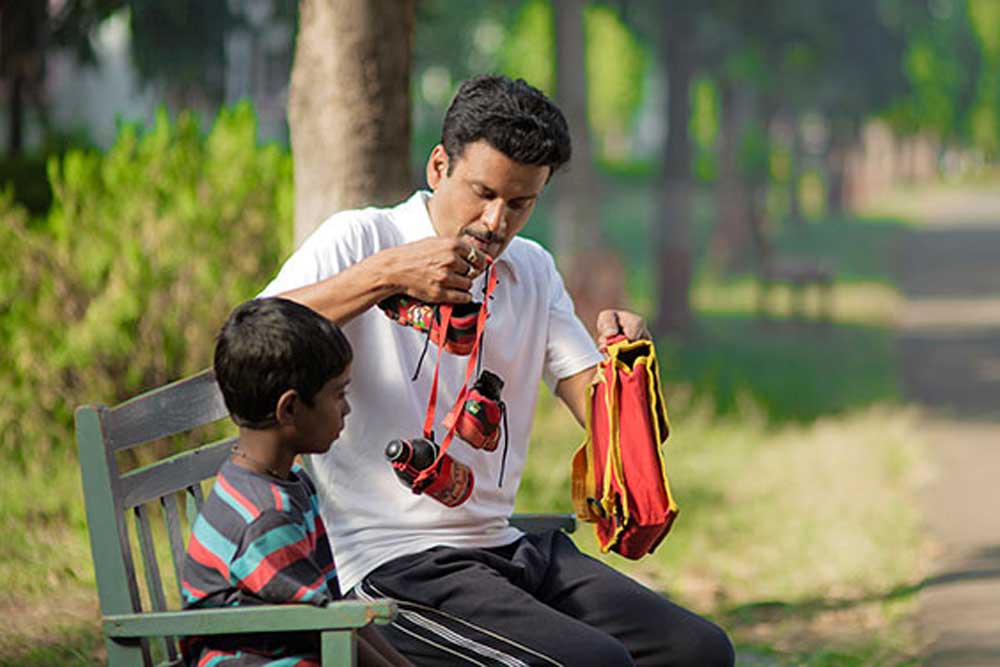 Budhia Singh may have been born to run, but what is more interesting are the twists of fate that followed him. He was sold by his own mother to a salesman, before being rescued and adopted by a Judo coach and a local do-gooder. The coach, Biranchi Das (Manoj Bajpayee), noticed that the boy could run for hours, and this is where the story begins.

That a four year old could be packaged as a professional marathon runner is a singular feat of rare imagination. What comes through convincingly in the film is the savvy and quiet aggression of his handler, whose idea it was. Sitting in Bhubaneswar, this coach is able to recognize the need for a regional hero who could become a national celebrity with some skillful marketing. Odisha pride is what was generated by the boy’s freakish ability to run long distances, and Odisha pride it was that turned both boy and coach into celebrities.

This Biopic is able to do what 24X7 media coverage of the boy’s running could not do then – to give us a perspective on the power of regionalism that sustained and nourished little Budhia Singh’s ability to run a series of marathons without any political and social welfare organization being able to stop what was arguably the cynical exploitation of a child. Budhia’s roadshows involved religious rites by priests to bless him and wild celebrations by village cultural societies that had never heard of a marathon runner before, let alone one that was four years old. No NGO or Government department dared to intervene, not even during the grueling 65 km run between Bhubaneswar and Puri that his coach made Budhia do in 2006.

The film shocks us more than it moves us, because it shows us the overweening ambition of an averagely talented individual who accidentally discovers a prodigy, and through him, is able to realize the social status he craves himself. Add to this, an assorted bunch of people, surrounding this coach, who have the same aspirations to regional stardom as he does, and you have an unhappy ending in the making.

Amongst other things, Manoj Bajpayee has this uncanny gift of being able to play a character who makes you uncomfortable from the moment you see him. This skill, coupled with the director’s inclination to present young Budhia Singh (Mayur Patole) more as a victim than a hero, turns this movie into a reasonably good watch.