Ali Fazal: At Home In the World

Whether he is the beloved Guddu Bhaiya in Mirzapur or the updated Cousin Andrew in Kenneth Branagh’s forthcoming Death on the Nile, Ali Fazal is showing us how to be a global star 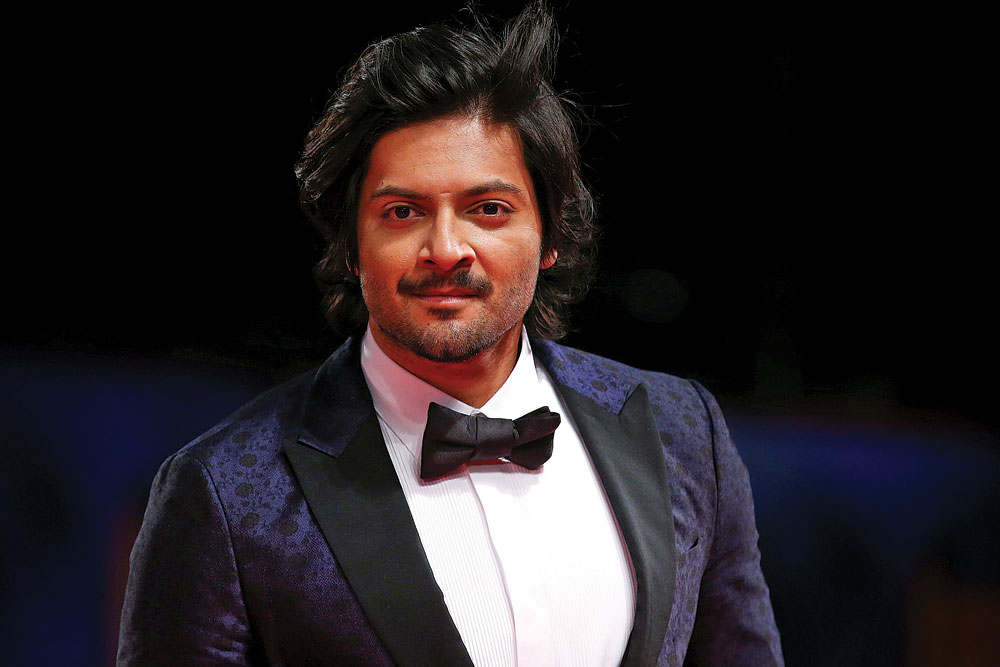 
HE SENDS MANGOES every season to Dame Judi Dench as a sly nod to a scene in Victoria and Abdul (2017) in which they starred together. He celebrated his birthday on set in London with no less than Annette Bening and Gal Gadot while shooting Death on the Nile. And he has just bagged another international film, a war drama Code Name: Johnny Walker, in which he is the lead.

Yet talk to Ali Fazal about his Hollywood career, and he barely mentions it unless prodded. The focus is on the here and now. And now, even as he awaits the release of Death on the Nile, an all-star reinvention of the Agatha Christie classic, he is enjoying the attention coming his way for his second outing as Guddu Pandit, the bodybuilder turned wannabe king of Amazon Prime’s Mirzapur. Having surprised himself by the bulking up he did for the first season of Mirzapur and the love he got for the character, Fazal is enjoying, in his typically bashful, low key manner, his rising fame in both the West and in India. Roshan Abbas, who directed him in his first lead role in the teen romcom, Always Kabhi Kabhi (2011), calls him “our first millennial international star”. As for Ali, all he says is “that’s what we actors do. We sign up to exploit ourselves and are just a click away from rejection”.

Fazal—whose upbringing is an unusual mix of Lucknowi heritage and the anglicised Doon School—allowing him to be as desi as urbane, has been able to play to these strengths in a career that began accidentally, having injured his arm while playing basketball and turning to theatre at school. Anand Tiwari who was to become his director in the breakout web series from YashRaj Films’ Bang BaajaBaaraat (2015) recalls how Ali would be much in demand as an actor for plays while he was studying economics at St Xavier’s College in Mumbai. “He was a paying guest in Churchgate and I was in Mahim, and we would sometimes take the late night train back home from Andheri. I was charmed by this young man, and saw there was something very approachable about him.” It took Tiwari a long time to convince Fazal to do the web series, but once he did, the series won him fans among men and women. The men wanted him to be their buddy and the women their boyfriend.


“Sometimes I still look for directors who can use me, help me churn out more. We all come with so many stories, don’t we?,” says Ali Fazal, actor

Fazal’s first big screen role was Joy Lobo, the young engineering student who commits suicide in 3 Idiots (2009), because of numerous pressures. “It was in my third year of college,” he says, and “it finally allowed me to have the chat with my father about not wanting his money anymore.” He had already made some pocket money with small roles in American productions like The Other End of the Line (2008) and the IFC miniseries Bollywood Hero (2009). A typical Bollywood lead debut followed in Abbas’ Always Kabhi Kabhi, produced by Shah Rukh Khan’s Red Chillies Entertainment, but it was in Fukrey (2013) that he was noticed. It also re-introduced him to his co-star Richa Chadha and the two have ever since been together, posting not just romantic videos of each other but also support of each other’s political and social choices.

Young actors in the film industry who don’t come from family firms usually have to attach themselves to ecosystems like Yash Raj Films, Dharma Productions, Anurag Kashyap’s school of filmmaking, or the Mukesh/Mahesh Bhatt camp. Striking a path apart from these is not easy. There is no one to advise you on which events to show up for, no one to push you for awards, or to gently suggest to magazine editors that cover stories be done. Despite being embraced by Yash Raj Films when he was making waves with Bang Baaja Baaraat, Fazal has made his own path, perhaps making mistakes, but also owning up to them.

Mistakes or not, the choices have always been interesting, whether it was playing lover boy to Vidya Balan’s Bobby Jasoos (2014) or a restless writer in Khamoshiyan (2015). For an actor what he chooses to act in is almost as important as what he or she gives up. This becomes especially tough for actors who want to straddle two cultures. Since Victoria and Abdul, which got Dame Judi her fifth Oscar nomination and Fazal a ringside view of an Oscar campaign, he has been up for consideration not merely for Indian parts but also for colour-blind casting in a Hollywood that has become increasingly concerned about diversity. “For a long time, though, the only Indian names casting agents knew were Dev Patel and Frieda Pinto,” says film writer Aseem Chhabra.

The film itself was a cozy period drama but it got him noticed with Variety calling him “yummy handsome”. Shrabani Basu wrote the book on which Victoria and Abdul was based. Abdul Karim was a 24-year-old clerk from Agra jail who was thrown into a royal wonderland for the pomp and ceremony of Queen Victoria’s Golden Jubilee. His life took a whole new turn when the Queen took a shine to him. She says: “Ali Fazal captured young Abdul’s innocence and sheer delight with humour and charm. It is entirely believable that the lonely and elderly Queen would want this handsome youth by her side.” Over the 13 years spent with the Queen, his character grows. He becomes pompous, and loves being the centre of attention. And yet, at the end, when his house is raided after Victoria’s death, and her letters to him are destroyed, he brings the audience on his side and we feel his pain and devastation. Fazal, for her, was the perfect Abdul to Dame Judi’s Victoria.

Back home though it was as Guddu Pandit in Mirzapur in 2018 that Ali developed a loyal fan base including some boys who thought it was cool to do as his character does, indulge in golis and gaalis (guns and abuse). Ali says he is lucky that he was championed by Excel Productions, who produced Fukrey and its sequel in 2017, as well as Mirzapur. “We actors are such prisoners of our last Friday,” he says. With Guddu Pandit and his physicality which he worked on for six months, he finally learnt to trust his instincts. “I never did that before,” he says, “but GudduBhaiya gave me confidence.”

“We’re here because of our writers, our directors, our technicians. Once you start celebrating everyone, the product becomes the king,” says Ali Fazal

Puneet Krishna, the writer of Mirzapur, feels there is a certain innocence to him that redeems his character, even though he is obsessed with power to the detriment of everything else in his life. He remembers Fazal was in London while they were rehearsing with the cast but would not let up despite the distance, working on his diction on WhatsApp voice notes. As for the second season, where he has fewer dialogues, not only did he insist on no bad language unless absolutely required but also remained in character throughout the shoot, using a stick or crutch and limping even when not shooting. And, says co-creator Mihir Desai, whenever he was free and there was a lull on set, they’d grab a camera and improvise with him, often retaining what they recorded. “He has a lot of nervous energy and is quite critical of himself,” he adds.

Much of his social conscience owes its existence toSaeed Akhtar Mirza, an early mentor who cast him in Ek Tho Chance (2014) and introduced him to Noam Chomsky. The movie is not particularly memorable but his association with Mirza was. “He was my guru and one of the coolest men I know. I remember walking into his office and there was this grand man, who reminded me of Francis Ford Coppola. I give him a lot of credit for my worldview,”Fazal says.

The boy who wanted to work for the United Nations, even interning with UNDP in Delhi, has his heart in the right place, feeling strongly about issues as varied as the Citizenship Amendment Act and the #MeToo movement. It informs his work as well. “It’s not just an actor-driven medium any more. We’re here because of our writers, our directors, our technicians. Once you start celebrating everyone, the product becomes the king,” he says. “Sometimes I still look for directors who can use me, help me churn out more. We all come with so many stories, don’t we?”

And he will use any platform he can to tell these stories. As director Roshan Abbas says, “the more you challenge him, the more he delivers”. But then Fazal is a firm believer that art exists to raise questions, if not social consciousness. “Who are we if we don’t do that?” he asks.