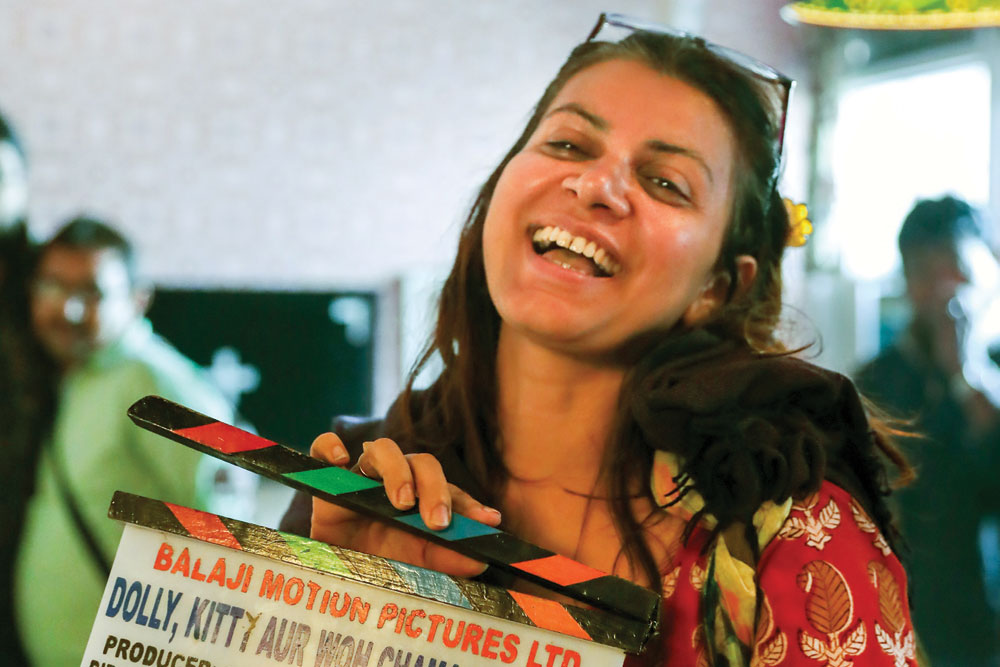 
VIRGINITY KO AAJ hum tata bye bye kiye aur pehli baar main hi maar kha gaye. Climax bhi nahin hua. Khoon baha bas [I lost my virginity today. My first time and it was so disappointing. I didn’t even climax, just bled],” says Kitty to cousin Dolly over a drink of whisky on the rooftop of the former’s hostel. Dolly responds by telling her about how she is supposedly frigid, probably because her hymen was restitched before her marriage.

Now meet Alankrita Shrivastava, 41. The soft-spoken writer-director has made it her business to go with her camera where few have gone before. Keeping the audience gaze on Naina as she breaks down by the side of her car in the pouring rain in Turning 30!!! (2011). Watching over Buaji’s shoulder as she masturbates while speaking on the phone to her dream lover in Lipstick under My Burkha (2016). Moving with Sobhita Dhulipala’s kinetic rage as she collects her clothes, packs her bag, grapples with her husband and smashes a picture frame in the final episode of Made in Heaven. Focusing on Kitty’s serene face as she has an orgasm in the back of a truck in Dolly Kitty Aur Woh Chamakte Sitare, her new film on Netflix.

Perhaps it comes from her loitering as a student of mass communication at Jamia Milia Islamia. “We would wander around the hidden nooks and crannies of Delhi—discovering the charm and beauty of the city. Sometimes recording qawwalis at the Nizamuddin Dargah, sometimes filming puppeteers and acrobats at Shadipur Depot. It was a lot of fun,” recalls Shrivastava.

She brings the same sense of exploration and adventure to her work, is uncompromising about depicting what women want and is determined to tell their stories.

For filmmaker Ruchi Narain, whom she considers her sounding board, Shrivastava is unabashedly bringing to the fore issues which affect and shape all women—and thus the rest of society too. “All other filmmakers have been unable to go beyond talking about basic empowerment or fundamental issues surrounding abuse when dealing with women characters, a fact that shows how far behind we are as a society in treating and seeing women as human beings, as equals,” she says.


My friends took me to a theatre to watch Turning 30!!! I just sat and cried through the entire two hours. I couldn’t believe people were watching my film, that they had bought tickets and come to see it, says Alankrita Shrivastava, director

For Shrivastava, the personal is political. Her initial training with director Prakash Jha, beginning with the cop-and-caste drama Gangaajal (2003), ensured that. Jha was doing social work in Bihar. And her mother was working with the UN. When Shrivastava was finishing from Jamia, he and her mother and some friends were having lunch. One thing led to another and soon she went off with her suitcase to Wai in Maharashtra to start work. “I loved being on set. And I was a hard worker. I asked Mr Jha if I could work on the post of the film too. He said yes. I moved to Mumbai full and proper, and worked my way up assisting on several films, being executive producer on some films,” she says. And then while being associate director on Raajneeti (2010), she shot Turning 30!!! with close friend and collaborator Gul Panag. The film emerged in her head with just an image of a girl whose car has stalled in the rain, and she is crying seemingly because her car has stalled, but actually because nothing in her life seems to be working out. And she is about to turn 30.

It was the first complete script she wrote. She was 28. It was the story she wanted to tell. But the weekend that Turning 30!!! came out, a few decent reviews and many bad reviews greeted the film. It was quite upsetting for the young filmmaker. Many of the reviews were sexist—passing judgement on the protagonist’s morality and character. “But my friends took me to a theatre in the evening. And it was running houseful. We got the last five tickets in the front row. I just sat and cried through the entire two hours. I couldn’t believe people were watching my film, that they had bought tickets and come to see it,” she recalls.

That moment changed many things for her. She realised that if people could connect to her work then that was enough. Over the weekend along with scathing reviews she started getting calls and messages from many people, especially women across the country, who were enjoying the film, finding pieces of themselves represented on screen. She felt quite overwhelmed.

She treasured that love. It gave her courage. She had not had a moment to breathe between 2003 and 2011 when the film released. So she decided on a long break. After that, while working to make ends meet doing marketing and publicity for Prakash Jha Productions, she wrote the first draft of Lipstick under my Burkha.

She realised she had not been still long enough to think deeply before that time. She grappled with questions about how free she was from within despite the external liberties that she seemed to enjoy. And she thought it might be interesting to look at characters who are trapped, who have financial compulsions too and have more traditional patriarchal structures blocking them.

And so four characters emerged—Buaji (Ratna Pathak Shah), an ageing widow who is the widely respected head of a century-old residential building, Hawai Mahal, where Hindus and Muslims live together. Shirin, played by Konkona Sen Sharma, a homemaker with three boys, whose husband works in Saudi Arabia in a construction company and doesn’t believe in using protection. Leela (Aahana Kumra), who works in a beauty parlour, frequented by all the women at Hawai Mahal. She’s in love with Arshad and likes him enough to have sex with him, often. Rehana, played byPlabita Borthakur, daughter of a tailor who sings like a dream.

IT TOOK SHRIVASTAVA forever to release the film. She went to several studios in Mumbai seeking its distribution. Every single studio said no. It was rather painful and heartbreaking.

Finally someone suggested she go to Ekta Kapoor’s Balaji Telefilms even as she started showing the film at festivals. But when she applied to the Central Board of Film Certification, the Board refused to certify it, in effect banning the film. The only way they agreed was when she cut 10-20 seconds from every intimate scene.

She learnt a lot from collaborating on the writing of Amazon Prime Video’s Made in Heaven with Zoya Akhtar and Reema Kagti. Kagti found Shrivastava’s thought process to be out of the box. “Her worldview is really progressive. She has a keen sense of human psychology, behaviour and society. She really pushes the envelope,” she says.

Shrivastava also directed the last two episodes, which whetted her appetite to work for streaming services. The result is Bombay Begums, a series for Netflix, which she has been editing and doing post-production work on during these pandemic months. Starring Pooja Bhatt, Shahana Goswami (who was smashing in A Suitable Boy), Amruta Subhash, Plabita Borthakur and Aadhya Anand, the series portrays five women across generations who form an unbreakable bond.

It mirrors her own life. Though she lives a solitary life in Mumbai, her adopted city, she has a vast network of friends. From Jha to Urmi Juvekar, script mentor at the NFDC screenwriting lab; from Anjum Rajabali, script writer/script doctor, who is still always just a text or a call away, to her closest collaborator her editor Charu Shree Roy. “And of course there is Ekta Kapoor. She really is the universe’s gift to me. She has backed my work when no one else has. When everyone warned her against it. She is brave and unique,” says Shrivatasva.

When Shrivatasva was studying journalism at Delhi’s Lady Shri Ram College, she did a project on women filmmakers for which she went to Mumbai to interview Tanuja Chandra. It convinced her that filmmaking was what she wanted to pursue. Chandra says she doesn’t remember but she told her she needed to move to Mumbai if she wanted to build a career for herself. “I laughed when she told me this and apologised for disrupting her life. But if I was able to push her in some small way, I’m happy I did,” says Chandra now. Indeed the more women there are behind the camera, the more they will tell stories the way they see them.

Shrivastava is a voracious reader and finds herself intimately attached to different generations of female authors. “I feel a strong connection with the works of Virginia Woolf, Jane Austen, Toni Morrison, Ismat Chughtai, Doris Lessing, Elfriede Jelinek and many other female literary figures. And in today’s times the work of Elena Ferrante really speaks to me,” she says.

The words shape her fantasies and her reality. At the end of Dolly Kitty, when Kitty says Greater Noida is the city of dreams and women will be its future, you can almost believe it. It would be a city in which Dolly can pursue her independence, her son can follow his heart on what he wants to be, and her mother, who abandoned her as a child because she just couldn’t take any more domesticity, could live without being stigmatised. And it would be a place where there’d be a phone service just to cater to women’s innermost desires. For Shrivastava, the world is not a dollhouse of polite figures and silent shapes, but an endlessly transforming fair ground when women can be, do and dream whatever they want.