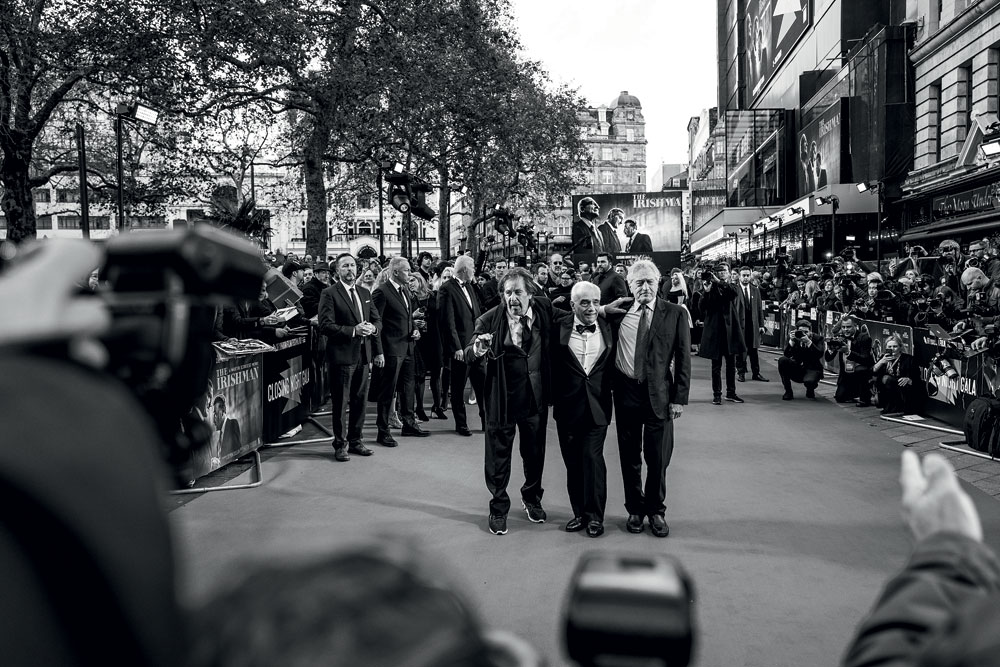 
THE FOUR SEASONS Hotel in Beverly Hills, tucked away at the corner of South Doheny Drive, a typical street in this quiet, posh neighbourhood, may not have the storied history of the Chateau Marmont, where John Belushi died of a reported overdose, and James Dean famously jumped through a window to impress a director. Neither does it have the sort of Hollywood mythology that’s attached to The Beverly Hills Hotel, where the notoriously reclusive Howard Hughes requested his meals be left by a tree on the property so he didn’t have to make contact with hotel staff. But at practically any time in the year it’s not uncommon to catch a movie-star sighting here given how many Hollywood events and press junkets are conducted on its premises. On this warm November afternoon though, there’s no fleet of black SUVs in the driveway, and the only ‘star’ one catches a glimpse of before making one’s way through the doors is Marilyn Monroe, or really the life-size statue of hers by American sculptor J Seward Johnson that greets you just by the entrance.

Don’t be fooled though. Inside, beyond the stunning floral installations that dominate the lobby, ensconced in a passageway you probably won’t notice, there’s a suite spacious enough to host a small party. On the other side of the doors to this room, two of America’s greatest living actors are dissecting the events of the previous evening.

Robert De Niro, 76, and Al Pacino, 79, are in town to promote The Irishman, their latest film, whose Hollywood premiere they attended at the TCL Chinese Theatre last night. “Seemed to have gone well,” Pacino deadpans, underplaying the long, enthusiastic ovation the film reportedly received at the end of the screening. De Niro nods in response, but almost dismissively, as if reminding his friend that they’ve been in the business long enough not to take any of this too seriously.

As it turns out though all the hype around The Irishman is legit. Adapted from the 2003 book I Heard You Paint Houses by Charles Brandt, the film chronicles the life and times of Frank Sheeran, a World War II veteran-turned-mob hit man who was allegedly involved in the death of notorious union boss Jimmy Hoffa. In the hands of Martin Scorsese, it’s a masterly three-and-a-half-hour epic that’s structured as a contemplative elegy. De Niro plays Sheeran both as an old lonely man in his final years looking back at his life, and (with the help of expensive de-ageing technology developed especially for this film) as younger iterations of the character, going so far back as his thirties. Pacino plays Hoffa, and Joe Pesci came out of retirement to take the role of mob boss Russell Bufalino and both men have been similarly ‘de-aged’ on screen.

The film has been making news for the fact that it was funded by Netflix, which put up the estimated $175 million budget after the project languished for nearly a decade because no traditional studio would invest that kind of money in a ‘non franchise’ film. This, of course, means that the bulk of people who will watch The Irishman will do so on their television, computer, tablet, or (ulp!) phone screens after the film completes its brief (26 days), exclusive theatrical run in the United States in whatever ‘select’ cinema chains Netflix can persuade to play it. It’s a similar rollout plan to the one accorded to Roma last year, which, like The Irishman, was turned away by the major chains because Netflix won’t give them the 90-day exclusive theatrical window that other studios commit to.


It is, no doubt, a baffling arrangement for someone like Scorsese to agree to, given that he’s been a vociferous defender of the big-screen experience. But it’s also a telling indicator of how dramatically the business has been upended, when one of the masters of modern American cinema—in case one needed a reminder, he’s the Oscar-winning director of films like Mean Streets, Taxi Driver, Raging Bull, and The Departed—can’t get a movie made within the traditional studio system…and one that stars two legendary actors. It’s something Scorsese and his leading men have spoken a lot about already, and today the septuagenarian stars don’t seem particularly keen to go down the same road. They’d rather focus on how pleased they are with the way their new film has shaped up.

In an interview with Variety in September, De Niro remembered attending the Italian premiere of Righteous Kill in Rome in 2008. Massive crowds had gathered to celebrate what was, in fact, a standard-issue cop thriller starring De Niro and Pacino; their first film together since that iconic restaurant scene in Michael Mann’s Heat over a decade ago. Taking in the throng of fans cheering loudly for them in the hope of snagging a picture or an autograph, De Niro revealed in the interview that at the time he turned to his co-star and said: “This is a great reaction, but it would be nice if they were here for a movie that we feel really proud about. Next time we’ll do one we like.”

To observe them together is to take in one of those legendary friendships of Hollywood up close. You can see Pacino only needs to start a sentence, and De Niro seems to know where he’s going with it

Both men claim that The Irishman is that one. You could argue that of course they would say that. Hello, they’re here to plug the movie! But no, they appear to genuinely mean it; there’s none of that Hollywood movie-star BS in the directness they speak with. Also, if the proof of the pudding is, in fact, in the eating, then you only have to watch the film to know why they needn’t be anything but proud. It’s Scorsese once again wading into the world of organised crime; a world he knows only too well. It’s Pacino, handsomely grandstanding as Hoffa, and De Niro, quietly intense, until he explodes. All of them going through the paces plotted in Steven Zaillian’s dense but brilliant script.

Pacino, kitted out in a complete black ensemble, including sunglasses, which he insists on keeping on indoors, admits he’d been looking forward to working with Scorsese. They almost did, many years ago, on a biopic of an Italian artist, but the stars weren’t in their favour and the project didn’t fructify. He jokes that he was always “a little envious of my friend here,” playfully nudging De Niro with his elbow, referring to the fact that Scorsese made ten films with his co-star, including Raging Bull and Casino which Pacino counts among his favourites.

Since his friend brings up the film, De Niro shares how Raging Bull came about. “I was given Jake LaMotta’s book, his memoir, by a guy who knew him. I read it while I was making a picture in Italy, and I remember calling Marty [Scorsese] from the set and asking him to look at it. I remember telling him it had heart.” He pauses, gathers his thoughts, then continues: “I was very interested in the idea of gaining the weight. We did a lot of research; met Jake’s wife. Then we all got together—Marty brought [screenwriter] Paul Schrader who gave it structure—and off we went to an island in the Caribbean and we worked on it.”

It’s evident that Pacino has heard this story before, and yet he has the unmistakable enthusiasm of a seven-year-old as he hangs on to every last word of his buddy ‘Bob’. De Niro, for his part, seems permanently amused by ‘Al’, seldom able to contain his smile when Pacino goes off on a long, rambling tangent while responding to a perfectly simple question, but one that inevitably yields a funny anecdote or a punch-line.

To observe them together is to take in one of those legendary friendships of Hollywood up close. You can see Pacino only needs to start a sentence, and De Niro seems to know where he’s going with it, nodding or smiling conspiratorially. There is warmth, but also an abiding respect. De Niro isn’t given to a lot of words; I suspect when Pacino jumps in and elaborates on something his friend just said it’s because he knows the interviewer needs more.

THE MEN FIRST got to know each other when they were both young actors in New York in the early seventies. De Niro famously auditioned for the role of Michael Corleone in The Godfather, but Francis Ford Coppola had his heart set on Pacino. He cast De Niro as a young Vito Corleone in The Godfather: Part II, but the actors never shared the screen until Heat. De Niro is not a big fan of nostalgia; he becomes visibly impatient when you ask them to recollect memories of filming that scene. He mumbles something about them doing no rehearsals. Pacino explains that they shot it late at night, and that it evolved over many takes. “Eleven,” De Niro offers, remembering the number of times they did it before Mann was satisfied. Pacino mentions that little things like a movement, a head turn, leaning in front, or “anything that signified the shifting of the upper hand” came in the moment.

De Niro doesn’t remember the details. Or in any case has little interest in rummaging through his memory for them for the sake of a magazine piece. Pacino chortles at his friend’s lack of interest and winds down the story.

Their chemistry is palpable, their understanding of each other’s personalities so astute it’s truly remarkable. As a parting shot I ask if they think they’ll work together again. After all, it has taken over 40 years for them to make a movie in which both have full-fledged roles and in which they don’t appear together in merely a single scene. Pacino chuckles again, as if he’s heard the question before, then mumbles indistinctly that there may already be something brewing. De Niro just smiles. Either because he’s decided he’s going to hold on to their secret, or because he’s relieved that our time is up.

(The Irishman is streaming on Netflix)