What a horror! This has to be the lowest point in RGV’s cinematic career 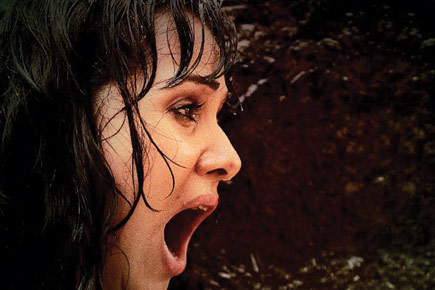 What a horror! This has to be the lowest point in Ram Gopal Varma’s cinematic career


This movie marks the precipitous decline of Ram Gopal Varma. From Satya, a landmark ‘noir’ film he made a decade ago, to Agyaat, an exceedingly common horror film that could give stiff competition to the Ramsay Brothers, is distance travelled. He seems to have lost the basic technical competence he was known for as a director.

Agyaat is about a movie unit on location deep in a jungle. The camera malfunctions during an early schedule and is sent back for replacement. The actors and crew are kept waiting for a few days in the forest and during this time, a ‘thingamagig’ is on the loose. It roars and screeches bloody murder and knocks off one unit member after the other in progressively horrendous fashion.

Interestingly, the ‘thingamagig’ seems aware of film unit seniority, starting with the murder of the producer (Ishrat Ali), followed by the director (Howard Rosemeyer). It also seems to have a keen sense of film appreciation, killing actors who ham the most.

Director Ram Gopal Varma uses sound and visual effects to highlight the creature’s characteristics, primarily high-decibel wailing and the eerie, observational, point-of-view camera that tracks the victims rushing blindly through the forest. The colours are vivid and when the gentlemen meet their ends, they look like tomatoes in a mixie. Shot in Sri Lanka, the wildlife in the film is exquisite and the finest sequence is an elephant appearing suddenly out of the bush.

Once the whole technical crew is wiped out, the protagonist (Nitin Reddy) finally gets the privacy he longs for, whispers sweet nothings to the leading lady (Priyanka Kothari) and tells her he loves her. Agyaat is a pretty scary visit to the movies. A nasty, splitting headache follows you all the way home.