Ageing in Life and Films

Retirement and the thrill of a new beginning 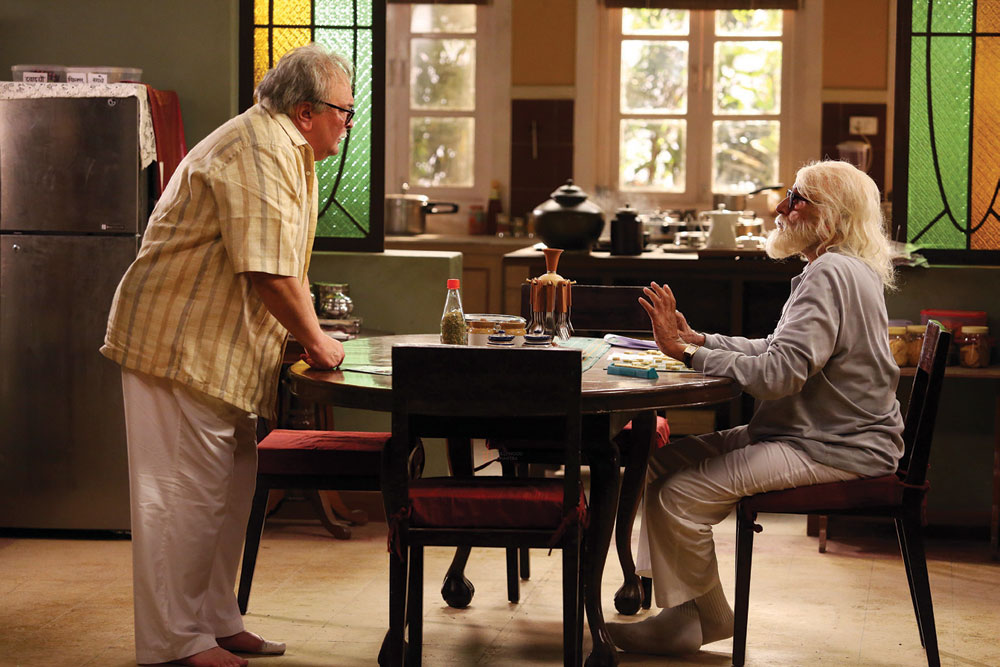 Rishi Kapoor (left) and Amitabh Bachchan in 102 Not Out


I HAVE TAKEN EARLY retirement from my job as Professor of Indian Cultures and Cinema but will continue my forty-year association with SOAS University of London as Professor Emerita and through my former students and colleagues and the global network of South Asianists. As Shailendra wrote and Lata sang, ‘Ajeeb dastan hai yeh, kahan shuru kahan khatam? Yeh manzil hai kon si, na vo samajh sake na hum.’

I can’t believe how lucky I’ve been. I don’t want to attract nazar so I’ll just say I’m grateful to have met so many wonderful people in the academy and beyond, and spent time in India and South Asia, making lifelong friends, looking at elephants, watching films, eating, going to amazing places and learning.

Even if I’m immobilised by Covid-19 and recent poor health, I look forward to returning to India soon. Retirement is a new stage of life, one which has only a fairly recent history, usually dated from the Old Age Pension Act in 1908 in the UK which first made state provision for it, but is unlikely to continue forever as life expectancy in the UK is now 81. The state pension age has risen in recent years to around 65-68 though many jobs (including most academic ones) no longer have compulsory retirement. When I began my career, I had a compulsory retirement age of 60.

In his book, No Aging in India, Lawrence Cohen argues that India has a different understanding of ageing from the USA and elsewhere. In the US the focus is on failing minds, in particular Alzheimer’s, whereas India doesn’t view ageing as a disease but rather sees its attendant problems as symptoms of the breakdown of the joint family. The idea of what age is old is also changing as India’s life expectancy has leapt from 32 in 1947 to
69 today.

Perhaps rather than using somewhat meaningless numbers, the concept of the four ashramas or stages of life is more helpful as a way of understanding retirement, not as giving up work but as retiring from one stage of life and moving to another. While the ashramas were designed for upper-caste males, their use can be extended. Retirement is the third stage, after brahmacharya (studenthood) and grihastha (householder), called vanaprastha (forest dwelling) before sanyasa (renunciation). The idea, in a nutshell, is this: of handing over to the next generation, whether one’s children or one’s colleagues, and taking a backseat, but still engaging with the material world.

Although many have the impression that movie stars are very young, in Hollywood and in Indian films, the male hero is usually an average age of forty, with about half the lead roles for men being taken by actors above that age. For women, this is the end of her career, thirty being the average age for a lead star.

In Hindi films, the length of the male star’s career is now longer than it was. Raj Kapoor retired as a lead hero in his early 40s after Mera Naam Joker (1970), and Dilip Kumar had his last hits as a hero in his 40s too.

Dev Anand continued having hits as a lead star longer, being 55 when Des Pardes released in 1978. Salman Khan at 54 is still a lead hero who romances leading heroines, though he may become the butt of jokes, as in Ek Tha Tiger (2012), when the heroine (Katrina Kaif) says, ‘Ab tumhari umar shaadi ki ho gayi hai [The time for your marriage has passed].’

Hindi films were routinely lambasted for having overaged heroes whose wigs and paunches were unmissable, but recent decades have seen many films featuring older heroes and heroines, rather than playing parents and others. (My favourite age passing was in Mission Kashmir, 2000, where Sonali Kulkarni played Sanjay Dutt’s mother despite being fifteen years younger than him.) While art and middle cinema across India starred older actors or actors playing older characters (including Jalsaghar (1958, Bengali), 36 Chowringhee Lane, (1981, Bengali/English), Sandhya Ragam (1989, Tamil) and Astu (2015, Marathi)), Hindi films, at least until 2000, struggled to accommodate older stars, even Amitabh Bachchan, in lead roles. As mainstream ‘Bollywood’ cinema widened its remit to include a wider range of styles and genres, so older stars began to feature.

While it was expected that an older couple won’t be romantic, let alone sexually active, films now allow this. Uttarayan ( 2004, Marathi) had a couple separated by marrying others reunited—to the horror of their families—but Badhai Ho (2018) had the mother of an adult child becoming pregnant, seen as a scandal and an embarrassment rather than a joyous event.

Perhaps the most celebrated film starring an older couple (Amitabh Bachchan and Hema Malini) is Baghban (2003), where the casual thoughtlessness of adult children towards their retired parents becomes cruelty. The revulsion this creates is saved by the adopted son (Salman Khan) showing love and kindness to them and the parents’ rejection of their own children after the father wins the Booker Prize writing on the theme of adult children and parents.

Most actresses retire from the mainstream when they are offered marginal roles but some older characters are still active. Kamini Kaushal, who first appeared in Neecha Nagar (1942) played Shahrukh’s grandmother in Chennai Express (2013), and was seen looking spry at a London Indian Film Festival a few years ago.


Hindi films were routinely lambasted for having overaged heroes whose wigs and paunches were unmissable, but recent decades have seen many films featuring older heroes and heroines, rather than playing parents and others

Older women in films are perhaps more changed than the men. No longer the widowed mother in a white sari now that ‘old’ means Waheeda, Hema, Sharmila and even Neetu who all look fabulous without needing the qualifier ‘for her age’. They simply hold the screen. Their performances, imbued with a hint of their younger glamour, have clicked with audiences of all ages, as did the ‘comeback’ film of superstar Sridevi in English Vinglish (2012). It is counted among her best performances as she played an altogether different role from her earlier films.

Among the men, two actors in particular never retired, namely Rishi Kapoor and Amitabh Bachchan who had worked together so often in the 1970 and ’80s. Rishi Kapoor was making movies until his untimely death in April this year. He partnered with Neetu Kapoor in Love Aaj Kal (2009), Do Dooni Char (2010) and Jab Tak Hai Jaan (2012) and appeared with Amitabh in 102 Not Out (2018). He found a new generation of fans with his performances in Agneepath (2012), Kapoor and Sons (2016), and in Mulk (2018). These films showed he was not just a top mainstream star but capable of a wide range of performances and styles.

Amitabh Bachchan, who was also a key figure in parallel cinema in its heyday of the 1970s and 1980s, has found central roles in the new Hindi films today, with acclaimed roles in Shoojit Sircar’s Piku (2015) and Gulabo Sitabo (2020), as well as Pink (2016) as the Angry Young Man became the Grumpy Old Man.

Rishi and Amitabh are exceptions to the rule on retirement, like Jack Nicholson and Clint Eastwood in Hollywood. They became models of successful ageing, manifesting no decline, mental, physical or social, showing the exceptional qualities that made them such stars.

Perhaps it is also the audience, of us oldies and retired people, who remember their superstardom but have enjoyed seeing them age and remain stars. The more fortunate among the older audience have time on their hands and continuous access to OTT platforms, such as Amazon Prime and Netflix. The retired audience can’t be dismissed and the grey rupee may be exerting significant pressure on Hindi films themselves, traditionally thought of as youth culture.