‘Acting was really an act of defiance for me’

In her recent film, Tillotama Shome forces the audience to reckon with class prejudices. The actor tells Divya Unny why she chooses movies that make her uncomfortable 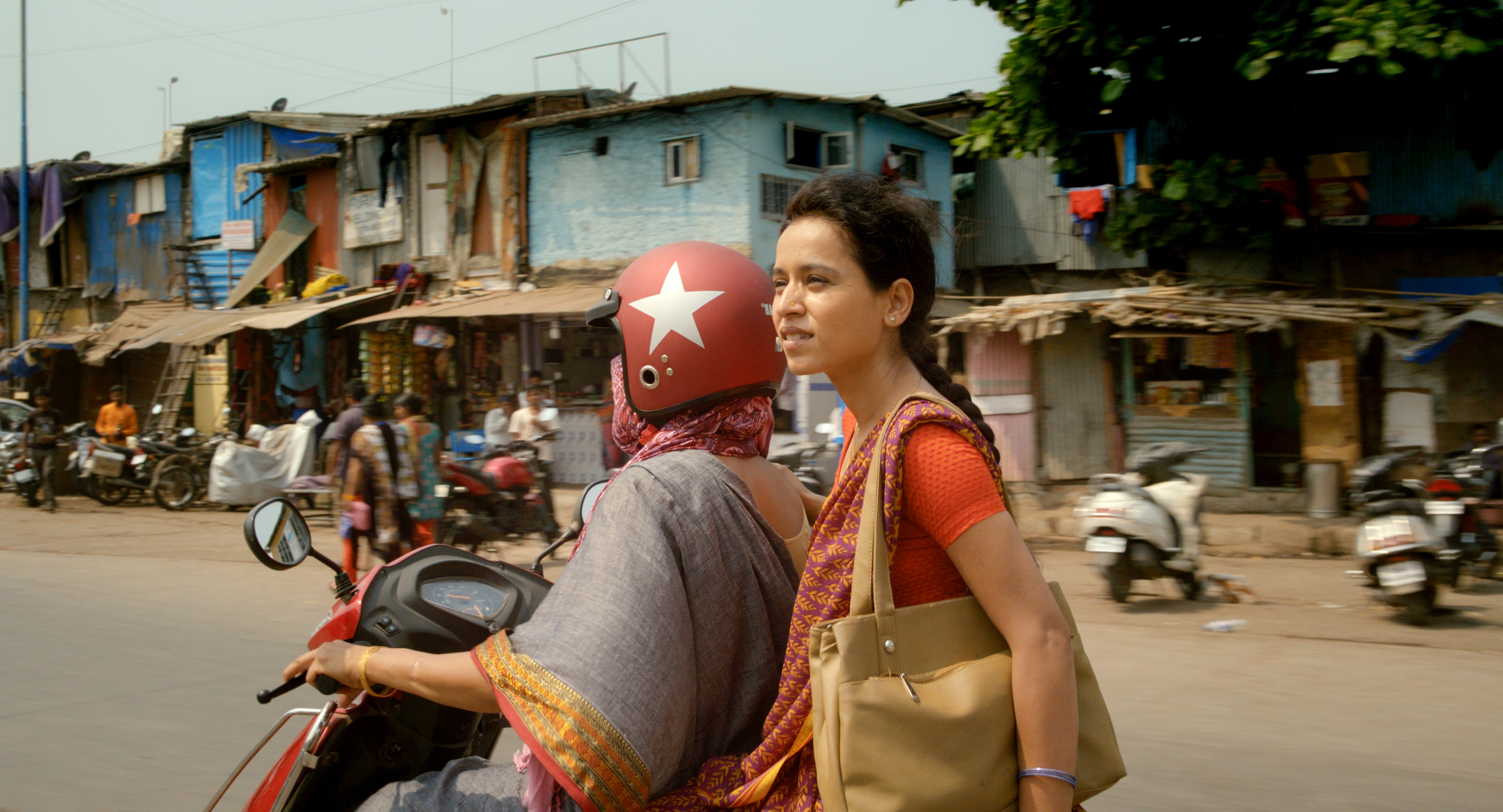 A still from Sir


As the wide-eyed Alice in Monsoon Wedding (2001), Tillotama Shome entered the world of independent cinema with a quiet bang. Subtle yet powerful, she could communicate her feelings with just a flicker of the eye. She was understated and old-school in her portrayal of a house-help who was often reminded of the class difference between her and the affluent Delhi-based family she served. Mira Nair’s Monsoon Wedding, despite being an American production, transformed the indie-cinema movement in India at the time. And Shome in turn became one of the most prominent faces of that movement. “It’s been two decades and even today I have people walk up to me and mention Alice and Dubey’s love story. I’m amazed how much of an impact it created to last this long,” she says coming full-circle with her newest film Sir. Here, once again, she plays a house-help, but one that defies barriers of class, and strives every day to protect her pride and dignity.

Sir is a sensitive love story between a live-in maid and her employer. At first it seems like an implausible plotline. But it deals with the complexities of this relationship, with such maturity, that it’s the two people you connect with, irrespective of who they are or what class they belong to.  Sir, directed by Rohena Gera, played at the Critics’ Week in Cannes last year. It made more than 10 crore rupees at France’s box-office in 2019, and was to release in India in March, but got indefinitely postponed due to the lockdown.


We managed to meet just before the country had to shut down. Sitting in the basement of her elder brother’s charming little café in Versova, Shome reveals how she herself felt guilty of the class prejudice that the film critiques. “We don’t acknowledge class because it makes us uncomfortable. I am okay with somebody making my bed, which I have slept on and my sweat is on it. I am okay with somebody making my food which goes inside my body. I am okay for somebody washing my clothes which I wear on my skin and strut out in. But I am not okay with falling in love with someone who works in my house. When I read the script, I checked in with my sense of discomfort and how much hypocrisy existed in me. This is why I was compelled to say yes to the film. It made me uncomfortable. It’s a great place to start I think, if your work makes you uncomfortable in ways that pushes you to be conscious at least,” she says.

In playing Ratna (her character in Sir), Shome undoes every stereotype of how we perceive domestic help. Ratna is ambitious and challenges prejudices to further her dreams. She is unapologetic about her feelings for the man she works for, but wouldn’t risk her dignity for love. Shome performs the part with so much grace and spunk, that you want her to win. “When I looked online for testimonials of marriages across class, the only hits that came up were pornography. That was really worrying for me. Even an imagination of desire across class in the world of fiction, is so exploitative. We felt like it shouldn’t come across as voyeuristic. The guy is genuinely not patronising, and Ratna never loses her sense of dignity despite the in-dignifying situations she often finds herself in. I’m glad there is a growing number of films and poems about caste from Sairat to Fandry to Court, which talk about caste in very explosive ways, but I feel class is still something that we don’t want to touch. And that’s because it is everywhere and runs too close to home,” she adds.

I’m glad there is a growing number of films about caste from Sairat to Fandry to Court, which talk about caste in very explosive ways, but I feel class is still something that we don’t want to touch. And that’s because it is everywhere and runs too close to home

Her opinions and beliefs are evident in the parts she chooses to play and how she plays them. She proudly declares that she has made a career out of playing marginalised characters and is conscious of not misrepresenting or romanticising them. “I know that I come from a lot of privilege and entitlement. My father was an Air Force officer and though we were a middle class family my parents are fiercely liberal and equipped us to have the kind of burning ambition me and my brother had. On the contrary, the characters I played are often beyond marginalised, they are really in the fringes, invisible, sometimes the poorest of poor and their challenges are so basic, that it’s a wake-up call for me. I feel responsible to portray their lives and desires as accurately as possible,” she says.

Most of her films have been multilingual and niche such as Shadows of Time (2004), Tasher Desh (2012), Qissa: The Tale of a Lonely Ghost (2013), A Death in the Gunj (2016) orKadvi Hawa (2017). That’s a filmography to be envious of for any actor looking for meaty parts. Her films don’t burn up the box-office, but the parts she plays have a soul of their own. Her performance as Kanwar, in Qissa, a girl forced to dress up and behave like a boy to fulfil her father’s desires is among the most credible performances by a female protagonist in recent times. Watch her surrender to her co-actor Rasika Dugal in a scene in Qissa where she undresses on her wedding night to finally reveal herself as a woman. There’s power and pathos in the way she interprets her part. You wonder how she gets into the skin of a character so completely. “During the prep of Qissa I was very concerned about the manliness or the brand of manliness I was expected to portray, when my director Anup Singh told me that he didn’t want me to play a man at all. All he wanted me to focus on was being the best son to my father. He made me understand that the way I am in my body in public and in private would be different and isn’t that the case with all of us? We never think of it, but as an actor that’s such a huge thing to be aware of. He also taught me to include my landscape in my scenes. Was I in rhythm with it or was I at odds with it? All of these little things form the basic understanding of the architecture of the scene that I carry with me from film to film,” she says.

Shome exudes a silent, defiant fire. She’s fiercely opinionated, well-read and prompts conversations that make you think. She’s political, but doesn’t insist that the world around her should be too. “I always feel like if I have a mind of my own, so do my characters and to be able to crack that mind is my biggest challenge,” she says.

It’s clear that her purpose to perform is more internal than external. The fame, the money, the conversations are all part of it, but for Shome from the very beginning, acting has been about personal evolution. As a child who lived in a new environment every few years, Shome immersed herself in books and music. She grew up around people who came from varied cultures and environments. She describes herself as an awkward child who preferred retreating into her world rather than interacting with society. Something that changed when she saw a play at Lady Shri Ram College for Women. “It was a one-man show by Piyush Mishra and I saw him transform into multiple characters. It was also when I started practicing Buddhism. And I thought to myself if I can act, if someone like me can act, then I can do anything. So, acting was really an act of defiance for me. I wasn’t playing to my strengths at all, but it worked. As I started performing on stage my stammer went and I knew something had happened. Something had shifted. I researched drama therapy and pursued that aggressively, even after Monsoon Wedding and Shadows of Time,” she says.

Her time in Mumbai was ridden with uncertainties, like most new actors who choose to walk the path she did. She calls the directors she’s worked with her biggest strengths. “There were weeks and months of joblessness where you are battling with your self-worth and most of the time it’s a battle you have to fight alone. But having said that I wouldn’t have survived it if it wasn’t for the directors who gave me the jobs they did. They were perfume gardens that kept me going in times I didn’t have work. They were friendships and relationships that kept me going. Even in that period of waiting, it never hit rock bottom because just the knowledge of the experiences you have had have been so priceless,” she says.

In the last few years with Hindi Medium (2017), Angrezi Medium (2020) and now the web show Mentalhood, Shome feels like that she’s finally spilling into the commercial zone, though she never gunned for it. She now often spends half her year shooting, and the other half hopping from one prestigious film festival to another, some of which she’s served as a jury member. She suggests it’s all by products of doing what she really loves to do. “Twenty years now and I finally feel like I am able to understand the business. You can’t afford to say, ‘I’m in it only for the craft’. And it’s very empowering to know what brings in the money. I have played so many intense parts, and now I want to explore comedy. And to finally be able to pick the parts you like is like a dream in itself. Hopefully, it’ll only get bigger and better from here.”