An implausible plot. Cardboard characters. And very unspecial effects. Even Akshay couldn’t save this dud 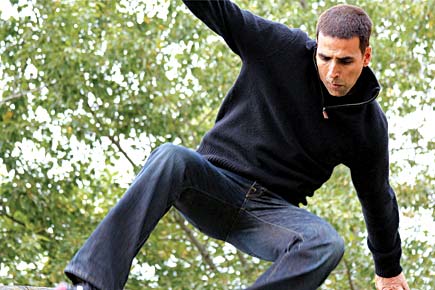 An implausible plot. And very unspecial effects. Even Akshay couldn’t save this dud


It is with sheer disbelief that you look at Nagesh Kukunoor’s name on the cred­its of 8×10 Tasveer. He is both writer and director of what has to be the worst-written movie of 2009. Ideas are ripped off from a hun­dred Hollywood thrillers, including Flatliners (1990), the film about a group of medical stu­dents who transport themselves into a world after death by bringing themselves to a near-death situation and then return to this world by cardiopulmonary resuscitation.

Jai Puri (Akshay) has the mysterious ability to get inside a photograph and witness events at the time the picture was taken. But whenev­er he does this, he has to be taken to the ICU for recuperation. On one occasion, he even ‘flatlines’, i.e. records no pulse on the monitor, and is clinically dead.

Jai wants to discover what actually hap­pened when his dad (Benjamin Gilani) kicked the bucket on a boat called Golmaal (yes, you read right). He thinks his dad was murdered and the suspects are a few  ‘A’ grade senior ac­tors in Hindi cinema, including Sharmila Tagore and Girish Karnad.  All this unfolds in Alberta, Canada.

The detective is a dude called Happi (Jaaved Jafferi), spelt with an ‘i’ and not a ‘y’, as he re­peats ad nauseam. And Jai’s fiancée is played by an off-colour Ayesha Takia. The visual ef­fects designer, whose visuals of entering and exiting the damned photograph take up 25 per cent of the running time in the movie, should perhaps undergo metamorphosis and be turned online into a graphic on his Avid.

Unfortunately, one suspects that when Kukunoor makes the occasional ‘masala’ film, he has little regard for the intelligence of the audience or the big stars he’s signed.  Akshay is no Naseeruddin Shah, but he has a good brand and he is a serious, hard-working star. To give him such a rotten part and third-rate lines is to mock him as an actor. Avoid this one. Unless you want a lesson in how not to copy a Hollywood flick.