Why We Leave Home

The story of a small Himalayan town in the Northeast 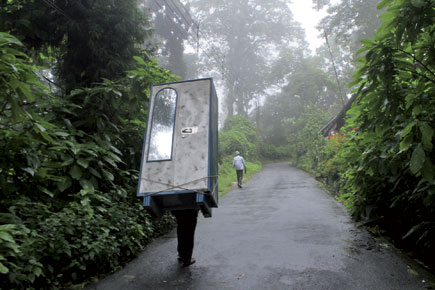 The story of a small Himalayan town in the Northeast


When I was young, I lived in an unremarkable house. It was made of wood and stone, and stood on a levelled boulder. But what was fascinating, at least to me, was a small see-through panel of glass that had oddly been built into a wall. Every few days, I would tiptoe to this panel, climb up a tall wooden stool, and peek through it to carry out what I believed was successful espionage on the rest of my family. I would observe my parents’ and my grandfather’s conversations, and, through the movement of their lips, try to ascertain the contents of their speech. I would later dwell satisfactorily on this activity of mine. I realise now that far from spying on my folks, the panel was used to keep me under supervision.

Once, as I went about this routine—I must have been about five then—a curious sight awaited me. There was an unusually large gathering of Khampa men (those from Tibet’s Kham region) in the room. Tall and broad-shouldered in their magnificent dark robes and broad-brimmed hats, they stood in deathly silence. Some had prayer beads in their hands. Some had daggers in their waistbands. When they moved a little, the ornate sheaths of their daggers ever so often caught the glint of the evening sun. My grandfather was with them in that gathering. His infirm body lay on a large bed. I saw an old Tibetan monk give him some water.

When I woke up the following morning, the same crowd had gathered on the street outside. It was still not dawn and the street was lit by a bright crescent moon. In one corner, I saw my dead grandfather.

Nobody spoke a word. There were no tears, there was no emotion. Somebody blew a conch and the rest just carried his body. But you knew they cared. As a magnificent moon looked on, this procession of silent mourners marched through the town from our house to a crematorium on the hill. They were carrying one of theirs to his final resting place.

These men, who had been deracinated in one land and abandoned in another, would soon go too.

And so would their world.

Kalimpong was a town of settlers. Located in the foothills of the Himalayas in West Bengal, about 55 km from Darjeeling, it provided permanence to the wanderer and the exiled. Nepalis came here. So did Tibetans, Bhutanese and various Indian communities. After Colonel Francis Younghusband’s ambitious expedition to invade Tibet in the early 1900s, for which he used a route via this town, Kalimpong became a flourishing trade centre. People dealt with salt, musk, caterpillar-fungus, medicinal plants, animal hides, and the most lucrative of all, sheep wool. The route stretched all the way from Lhasa to Kalimpong, and from there on to Calcutta and the rest of the world. According to some accounts, Tibet’s wool exports to the US, Britain, Italy and Japan in the 1950s were worth around $2 million annually, a large sum of money in the post-War years.

My grandfather was one such trader. He would make the journey from Lhasa to Kalimpong—sometimes on foot, sometimes on horse—over treacherous pathways and high mountain passes in around 18 days. After a few successful trips, he brought his wife to Kalimpong. He rented a house and found a shed for his 11 horses. And in this idyllic town, long before Tibet was occupied and before India regained freedom, he settled. Later when one of his horses delivered a pony, it was presented to my father as a gift.

Our house was located on a boulder between two roads. On the road above lived Tibetans, and below, the town’s Marwaris. Above, every meal was a feast of different animals, even of parts that the animal alive would not have been too proud of. Below, steel plates came with unusual contents: chapattis, curries and pickled vegetables. The Tibetan boys would often bully the other boys. When they grew up and started trading, though, the Marwaris proved too clever for them. On this fragile deal was their coexistence based.

My grandfather wasn’t originally from Lhasa. He came from Tibet’s Kham region. Far from the peace-loving Buddhists who now abound in popular imagination, the people of this region are martial. It is believed that when Ghengis Khan could not subjugate them, he drafted them to his army. My father remembers, when he was young, a head rolling about our house like a hairy football—the result of a Khampa acquaintance being accused of cheating in a game of dice. Khampas, as I noticed of my grandfather and his friends, did not speak much. When they did, their tongues were as coarse as their manners. Many of them in Kalimpong were involved in the Tibetan Uprising against Chinese rule in Tibet. When some of them secured an audience with Jawaharlal Nehru to present him with evidence of Chinese depradations, India’s then PM was struck by their appearance. “Just like cowboys,” he is said to have remarked, “just like cowboys.” In 1962, once the Indo-China war broke out, all trade ceased and the town’s commercial life came to a grinding halt.

There is an old undated photograph in my house. It is tattered on one side and tearing apart in the centre. Some Tibetans are seen sitting, while others stand. My grandfather is there too, seated some distance away from my young father. It is almost like a class photo taken in school, where subjects stand in rows with morose faces. Except that this is a wedding photograph of my father’s elder brother. There is, however, a strange expression on my grandfather’s face. I think he was smiling.

I remember this expression. Because I encountered it once while I sat beside him. I had turned around in a darkened hall and the light of a flickering screen had revealed a smile on his face. On the screen, an agile man was performing irresistible feats with his body. Many years later, I learnt that this man was Bruce Lee, and the film, Enter The Dragon. Like many other old-timers, in his advancing years my grandfather had two favourite pastimes: cinema and the Sunday show on Doordarshan. Kalimpong had two cinema halls. Kanchan was older and mostly screened Hollywood films, while Novelty, which had modern extras like cola and popcorn, screened new Bollywood films. Movie tickets, especially of Western and Bruce Lee films, would be hard to come by. And often the success of the films could be gauged by the fights that broke out outside the theatre. When we tried to get tickets at Kanchan for Enter The Dragon, a film that had been long released in other parts, not only were stones being thrown at each other, belts were being unbuckled and twirled, and fists strengthened with knuckledusters. The film ran for over a month. I remember having to ask my grandfather not to participate in the fight, even as an elder cousin had entered the melee with an unbuckled belt. We eventually had to buy the tickets in black.

We were also one of the few households to own a TV set, a black-and-white. Every Sunday, my grandfather’s friends and their wives would troop in. The men would bring their own chairs along, and the women, needles and wool. Someone would invariably have to stand outside shaking the antenna for better reception. After my grandfather’s death, this Sunday morning crowd thinned. One by one, over the next few years, we lost these people to either ailment or old age.

“Why do we have to go?” I remember asking my father once. “Because you have to,” he replied in a reproachful tone.

My grandfather was long dead and I was now approaching high school. We, along with his friends and their children, were on a picnic on the banks of the mighty Teesta. Just a little distance away, the powerful current of this river meets the calm waters of the Rangeet, a confluence so beautiful that it’s called ‘Lover’s Point’. All you hear is the sound of a river gushing down the hills, occasionally interrupted by the sudden glee of men who’ve hooked a big fish. My father’s suggestion that I leave town for a better life seemed unreasonable.

But the signs were already there. The bloody agitation for a new state of Gorkhaland was more or less over, but those who could were already moving. Youngsters were leaving town to either study or work elsewhere. Some moved abroad and others to nearby Indian cities. Kalimpong had neither good higher education nor employment to offer. Those who didn’t relocate hung around in darkened pool rooms—their only entertainment.

Kalimpong had changed. It had become a place where people came from.

A little over a year ago, I returned to Kalimpong after many years. Even as my vehicle was climbing the hill and approaching the town, I could feel the town in the air—light, as always, and filled with birdsong. When we neared the Teesta, I asked the driver to slow down so I could look out of the window to see the majestic river. It would be no exaggeration to say that I was startled. In place of the Teesta, there flowed an emasculated river.

The river that so many locals prayed to and which gobbled up entire trucks and spat out remnants several miles downstream was now a sad picture of its former self. It had been dammed at various points. Its current had no force and its water level had been raised.

Unable to understand my silence, the driver said, “Sir, they will start boating soon.”

During my stay, save one or two, I hardly found anyone I had studied with in school. The town had changed. Its people had changed. Everything was concrete and cement even though this made winters frighteningly cold.

On my last day, I visited the two cinema halls. Kanchan was still around with a melancholic air about it. But the nearby stores that enlivened the space with chatter and gossip had disappeared. On closer inspection, I found the gates of the theatre locked. No staff was around either. The ripped movie posters of a time long past were enough indication that it had shut shop many years ago. The area where all those fights used to break out had been converted into a taxi stand. At the other end of town, Novelty was still running. I bought tickets for an evening show of The Dirty Picture. Inside, the seats were broken, the fans creaky, and the entire area reeked of urine. Just entering it felt like visiting the hull of a long-sunken ship.

The theatre was empty, save for two groups. In one corner, a few young boys were drinking alcohol. In the other, two boys were entwined with two girls. At some point, someone vomited and left.

The girls left too.

And the rest of us just sat there in an empty, dirty theatre, each for a different reason, hypnotised by a film none of us really cared to see.

NOTE: Corrections were made to this article after it was published